What is written on my Mjolnir?

I have recently come into posession of Mjolnir 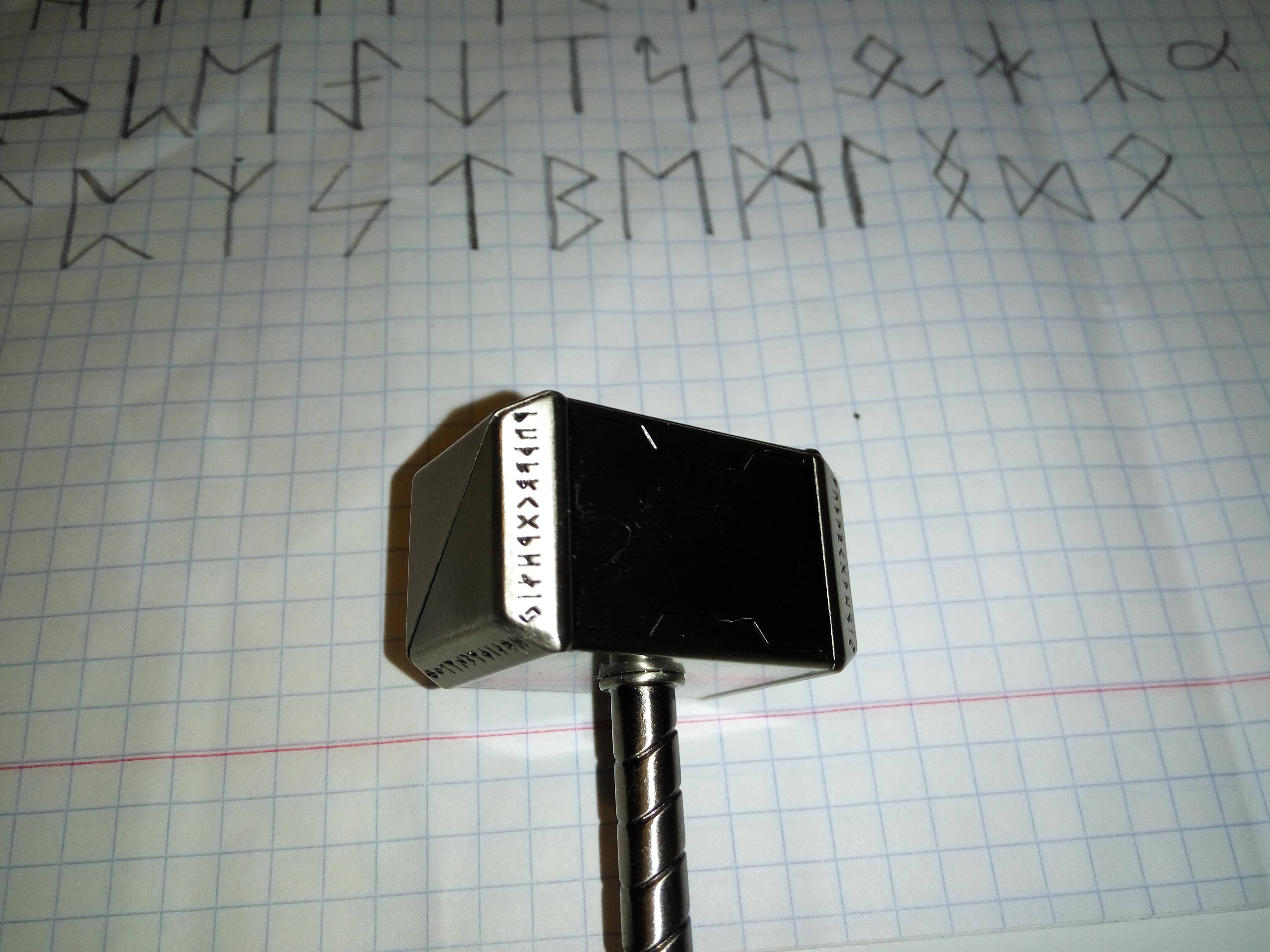 It has runes written on four sides, like in the picture, and these runes are mirrored (written symmetrical) on other four sides. I assume, that these runes translate to "Whosoever holds this hammer, if he be worthy, shall possess the power of Thor." But I would like to know:

I've written these runes to the paper

There four lines for "phrase" on every side. I am not sure, that I've written them right and not-mirrored, I was using this image of runes to guide me.

This is backward-written runic of a combination of sources. It is a mix of Elder and Younger Futhark, Anglo Saxon runes, and the script from Ultima, if the 4th rune from the left, on the top row, is any indication. I believe it to be rubbish -- there's a lot of consonants, but only a handful of vowels.

It also used a few Greek letters, which is... special... for a race supposedly older than us. Looking at this over a year later, I realized it's literally a slightly stylized revision of the Elder Furthark alphabet on Wikipedia! It's meaningless!

The order itself is the same as was described in the Old English rune poem that described the Old English names for the runes. This is due to Elder Futhark going out of vogue shortly after it started being simplified into Younger Futhark and Anglo Saxon Futhorc, coinciding with the heyday of Old English and possibly even being written during the rule of Alfred the Great, who established libraries and schools to teach Old English to the populace.

The rune that looks like an up-pointing arrow is for Tw, a Thor-like god type. Pronounced too, I think. Possibly Welsh.

The Norse and Welsh had common ancestors.

Not the answer you're looking for? Browse other questions tagged marvel marvel-cinematic-universe thor-marvel mjolnir or ask your own question.

52
How does Mjolnir determine 'worth'?
8
What does the inscription on Mjolnir exactly mean?
23
Is "if he be worthy" in Mjolnir's spell gender-sensitive?
6
You can't wield Mjolnir unless you're worthy, but has anyone ever stopped Thor from wielding it?
22
If Mjolnir was made for Thor, why is Hela seen using it in Thor: Ragnarok before it was even given to him?