When did Vader "kill" Anakin?

When Anakin fell to the dark side and took up the title of Darth Vader, he still acknowledged his identity as Anakin Skywalker: the name represents his identity as a person in whole, not just of the light (not yet anyway).

At least, we know that to be true up until Mustafar, since he didn't say anything to the effect of "that name means nothing to me now" to Padme or Obi-Wan.

At some point after that, he decided that Anakin Skywalker represented the light in him, and chose to "kill" him and deny Anakin as part of his identity, assuming Vader as his full and sole identity as the darkness within.

Vader "killed" Anakin at the point where he completely turned to the Dark Side. This moment is debatable. Some might say that it was when he killed the Tusken Raiders on Tatooine. However, the real moment when he became a Sith and Darth Vader took over was after Palpatine killed Mace Windu with Anakin's assistance. At that point, he became Palpatine's apprentice, Darth Vader. However, he fully assumed the identity of Darth Vader after he was told that Padme and his child died (even though THEY didn't)

Some could say that Darth Vader never really "killed" Anakin and that Anakin still had some light side in him throughout the entire saga.

Much of the plot of Episodes V and VI revolve around the idea that Vader's murder of Anakin was only true "from a certain point of view", and it wasn't Anakin's point of view. Although he spent a long time immersed deeply in the Vader identity, he considered that to be a new phase of his life, not a new life completely.

Thus, if we're to examine this question, it's Obi-Wan's judgment we need to consider, rather than Anakin's, because Obi-wan is the one who considers Anakin to have been murdered. But Obi-Wan's estimate of Anakin's time of death is rather slippery. He likely would have considered it to be whenever it was that Anakin had finally fully embraced the Dark Side of the Force, but he had no way of knowing exactly when it was.

But much of the end of Episode III deals with Obi-Wan struggling to accept his pupil's "death", and so this moment is one we can pinpoint with some precision. Even after watching security footage of Anakin slaughtering the Jedi Younglings, Obi-Wan cannot bring himself to battle his student. Even as they begin to fight on Mustafar, he still tries to coax his student back to the light. He goes so far as to blame himself for failing to train Anakin properly. This continues up until the moment when Anakin disowns his heritage ("From my point of view, the Jedi are evil!")

Then, and only then, does Obi-Wan declare Anakin "lost". This is where he begins to see his student as gone. As the fight winds down, he even begins to mourn his lost padawan ("You were the chosen one!") and he never speaks of Anakin in the present tense again. It is unclear if he has started to tell himself the murder story yet, but in his mind, Anakin Skywalker is dead.

In The Phantom Menace, when Padme asks Anakin if he's a slave, he answers "I'm a person, and my name is Anakin." His name is important to him - it's his identity. It would make sense that, given this, he would do what he could to shed the name Anakin Skywalker as he fell away from the light.

As for when this happened - I think it happens very explicitly at the end of the comic series Darth Vader: Dark Lord of the Sith.

spoilers for this series

The series takes places directly after RotS, with Anakin/Vader being turned to the Dark Side but not full Darth Vader quite yet. In the first volume, Anakin/Vader tries to make a kyber crystal bleed but has an intense vision of killing Palpatine and returning to Obi-Wan that he forces himself to ignore.

At the end of this series, Anakin/Vader has his palace on Mustafar created. When he enters it, he experiences flashbacks of his life before, of his childhood, of his Jedi training, of Ahsoka, and of his final battle. When climbs a tower and sees Padme for the first time, he sees her fully as Anakin Skywalker and tries to convince her to come with him, that he can save her. 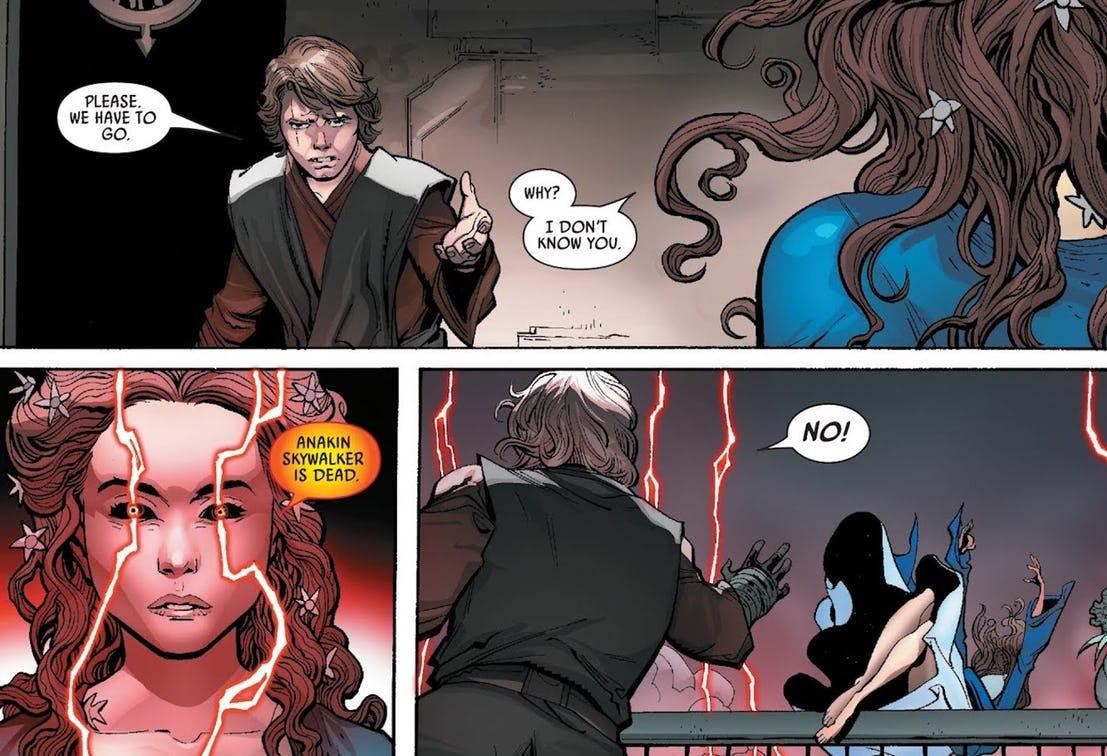 When this fails, Anakin/Vader burns down the illusion around him and emerges as Darth Vader. When Palpatine asks him "Have you found what you were looking for?" he responds "Yes." And so, as Padme put it, Anakin Skywalker is well and truly dead.

In the book Tarkin It explains that no one knows who Vader is and he is never referred to as Anakin. Although Tarkin grew to suspect his identity, he was, to everyone else, Darth Vader. It is my belief that he grew to see himself as Darth Vader as he recovered from his loss. He used the only part of his identity left (Darth) to define who he was.

You can find some part of reflexion by finding out when the Imperial March theme is played. In chronological order:

Obviously, this theme is in Revenge of the Sith and original trilogy.

So, Anakin's transformation to Darth Vader is all along his life. Or it never existed and Anakin always was Darth Vader. Do you see this glass half-empty or half-filed?

Anakin died over the course of his life. If you wanted 1 specific moment where he turns, it's a little harder. Anakin was dating, married, and conceived children with Padme, behind the back of the Jedi Order. Anakin slaughtered the Tusken Raiders in a fit of rage(personally I felt this was deserved). Anakin regularly spent time being manipulated by the Emperor. Anakin rage killed an unarmed Dooku.(hahahahahahah) Anakin helps kill Mace Windu. Anakin kills the Jedi. Anakin essentially kills his wife. Anakin goes full rage mode for the rest of his life(minus a minute before he learned Padme really had died). When did Anakin actually start to turn? It was very slow-starting when he kills the Tusken Raiders. The loss of his attachment pushed him to use power he didn't need to use. It really picks up after he starts to fear losing Padme(with a little Emperor manipulation). He ultimately choose darkness once he turns on Mace Windu. At that point, he was more dark than light-which got even darker. Sure he had some light-but each act pushed him farther away. Pretty sure killing kids would make him Full Vader-if he wasn't already before that point. He was so blinded by the idea that the dark side was the best choice-he forgot everything else but himself.

Not the answer you're looking for? Browse other questions tagged star-wars darth-vader anakin-skywalker or ask your own question.

80
Why did Obi-Wan leave Vader on Mustafar?
44
How did Obi-Wan know Darth Vader was Anakin?
14
Why was Vader's identity as Anakin kept a secret?
7
Does Padme know the name "Darth Vader"?
58
Why didn't Obi-Wan refer to Darth Vader as Anakin during the Death Star duel?
4
Did Vader/Anakin use the Force to kill Palpatine?
5
When did Vader find Ahsoka's lightsaber?
3
When did Obi-Wan know that Anakin/Vader was alive?
15
Why did Vader openly talk about Obi-Wan being his master?