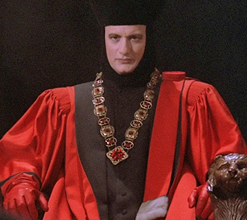 Specifically, does it come from a specific human time and location?

So far the best answer I can find.

JOHN De LANCIE (Q): I actually think the judge’s costume was pulled off another show. They did that kind of thing all the time, especially early on. Studios have a bazillion costumes in stock and they’re just redone to fit whatever’s needed on the next show or movie. So I believe that judge’s costume was a cardinal’s outfit from something else. - See more at: http://www.startrek.com/article/encounter-at-farpoint-28-years-later-an-oral-history#sthash.wfllWqzK.dpuf

The in-universe explanation is that it is from the mid-21st century courts, specifically 2079.

Anglo's answer is a great practical reason for the costume choice. I would like to add that the court also has a very sinister, guilty-until innocent feel that many Catholic Inquisition courts were / or at least portrayed to be as. The costume reflects this idea rather successfully.

This is covered in the show's original script. The decor and clothing are consistent with the year 2049, prior to first contact.

[It is an immense courtroom meant to reflect strength and power. (We'll discover that it dates back to the mid-21st Century post-atomic crisis era.) Both decor and legal procedures reflect the time when a desperate humanity, still wounded and bleeding from nuclear war, sought answers to its pain and problems through the merciless strength of a new form of dictatorial government representing neither capitalism nor communism.]

"Q" (JUDGE): This is a court of the year 2049, by which time more 'rapid progress' had caused all 'United Earth' nonsense to be abolished.

In the episode, the line is broadly identical, but for reasons known only to the writers, the setting (and Q's line) had been shifted forward to a point after the end of the Third World War

The costume borrows styling from the traditional French academic robes still in use today. I got my doctorate at Strasbourg and my shoulder sash (that bit coming over Q's left shoulder), while not the same color, is virtually identical in appearance. The shroud covering the sides of the head is definitely not part of my set-up, however; it might be an attempt on the part of the producers to evoke that Inquisitional mood one of the other commenters mentioned.

Given what De'Lancie has said 'pulled it off another show', but at one of my first ever UK Star trek Conventions I was told with quick shift, that it was a set of French C16th Judges Robes and indeed it is only those robes are black.

Anyone making it, the hat the most difficault thing to make well

Not the answer you're looking for? Browse other questions tagged star-trek star-trek-tng star-trek-q costume or ask your own question.

29
Where does Q technology come from and where did it originate?
7
What was Q's rank in "Encounter at Farpoint"?
26
What are the Q incapable of doing?
34
How did Q's actions stop the assimilation of the Federation?
8
Are the Q not as intelligent as they try to lead other species to believe?
6
What was the meaning of Q's cryptic comment?
16
Why does Q (nearly always) appear in uniform?
1
What are crew members doing in the Jefferies Tube in "Timescape"?
12
Are there indications of a loss of past historical records in Star Trek universe?