When was it decided that "Wolfram" was a portmanteau?

In the final season of Angel, it is emphasized that "Wolfram" in the name of the law firm Wolfram & Hart is actually a portmanteau, and that the ancient founders of the firm were

the Wolf, the Ram, and the Hart.

Was this function of the name "Wolfram & Hart" planned from the beginning or was it retconned into the show's final season?

In Season 2, the team visits Pylea where they encounter Covenant of Trombli Holy Books in the episode Through the Looking Glass.

It's very brief, but we see the holy books: 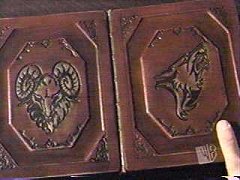 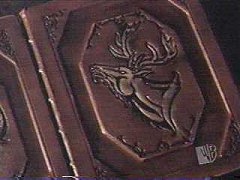 The team does notice the coincidence, but it isn't really spoken of again. From the transcript:

Gunn: "Like one of them priests the host was talking about. These books belong to them, right?"

Wesley closed the middle book and sees that it has the head of a male sheep engraved on its cover.

Gunn: "Look, you're the one going on and on about how you're the princess. Can't you just make them translate 'em for us?"

Wes closes the second book. It has a wolf's head on the cover.

Cordy: "I guess I could. Yeah. Why not? Princess, not really taking a vote, is she?"

Wes looks down at the images on the covers of the three books, rearranges their order.

Wesley: "And hart. - I'm not sure the priests can be trusted."

Whether or not it was a retcon at this point is unclear, since Wolfram & Hart first appears during the first season of the show, but the idea of Wolfram & Hart being a portmanteau was being established long before season 5.

28
Is there an Angel reference in Age of Ultron?

20
Why can't Buffy's mother know that her daughter is the slayer?
20
What was Cordelia's original fate as intended by the writers?
11
When Angelus has his soul, why is he called Angel?
4
Was the conception of Angel's baby ever explained?
15
When was it decided that Willow would be gay?
10
When did Buffy go to hell (the first time)?
4
Buffy the Vampire Slayer - was Angel killing when he had a soul?
12
What happened to Drusilla that made her so weak?
3
How come the Prince of Lies was killed so easily?
20
Who was the slayer before Buffy?