This is all I can remember.

There are four worlds whose people and technology were all swapped so humans ended up with high tech mech suits that they used to kill each other. There was a supposedly handicapped prince who faked being mentally handicapped and had a giant mech suit hidden underground that he eventually used to wreak havoc on earth.

The protagonist also had a suit and he saved the day. He was in love with a girl who was from another world and when he saved the day, all the people and technology from the different worlds were sent back to their original one causing the girl to leave him. She had colored hair and the final scene was her waking up somewhere with some children commenting on her hair.

There may or may not have been a reference to the protagonists scars in the shape of the constellation of orion on his body.

Any ideas? I've searched the internet for two years trying to find it.

From a review of Episode 5: "Destroyer"

As they ride an elevator down, Perion tells Manning that he pretended for seven years to be mentally retarded so that Miran wouldn't assassinate him. However, on the private refuge of his small island, he discovered a massive Armor.

Some screenshots from the episode: 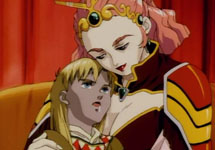 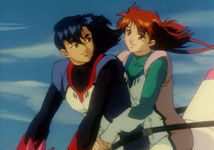 3
2000s (or earlier) anime movie with a mech powered by holy men, and a bad guy killing his family while pretending to be an idiot
2
Looking for an obscure mecha manga from the 90s or earlier

7
Anime style cartoon - 4 characters on a planet with giant oval floating robots looking for them - 1989 or before
9
Story whose final line is “Let there be light!”
4
Looking for an anime with people in mecha-like human-sized suits
6
Anime where guy has been hiding for all his life, is caught stealing food, and attends an academy for piloting mech suits
10
Sci-Fi/Fantasy Anime about a girl who turns into a world-destroyer
6
Looking for an older maybe 20 year old Mech Anime
4
Anime with two magician brothers fighting each other