What Anime features a monster blob being fought in New York City?

So it was back in 1998 I saw an anime for about 5 minutes before I had to leave with my parents to go to the grocery store. It was on the Sundance channel which used to play amazing stuff way back when.

The anime was subtitled. I remember there were these black kids fighting this monster blob in New York City, the kids had machine guns and a few of them got killed by this blob with tentacles. The anime simultaneously showed a headquarters in Tokyo with a tall guy in a suit who looked like the main character of cowboy bebop. He had a robot with a triangular head who teleported to New York City. The robot was tall. It's body was either gray or white and its inverted triangular head I wanna say was purple? It then saw the blob and said "I've traveled 2000 years from the star Vega for this moment" and as it said that, it made the sky black and this green laser rain came down on the blob, which induced injury, but angered it and made it transform into something...

That's all I remember from it. I've been looking for years and have asked anime fans about this subject and they have no answer. Hope someone can help!

I believe this is the 1983 Rintaro film Genma Taisen, known as Harmagedon in the USA. The premise of the plot is: An evil force known as Genma is trying to destroy the universe, and a team of "psionic warriors" is needed to defeat it. 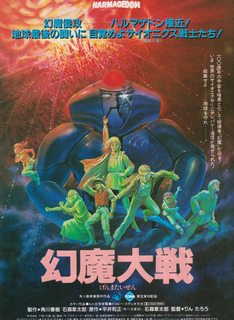 New York does get wrecked by Genma, and one of the black teenagers you remember, Sonny Lynx, becomes a psionic warrior. Here's him: 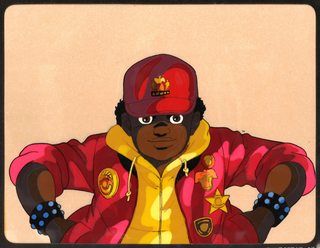 The psionic warriors are gathered together by Vega, a 2000-year-old robot with a rounded triangular head and a purple-grey face: 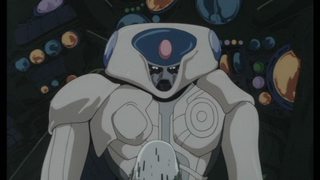 The film is not very well-regarded today - it's generally seen as an artifact of an era that promoted style over substance, with a plot that doesn't make sense. THEM Anime Reviews' Carlos Ross gave it two stars, and Anime News Network's Justin Sevakis included it as part of the "Buried Garbage" series, though both writers noted the ambition and effort put into the film. On the other hand, in 2007's Anime Classics Zettai!, Brian Camp and Julie Davis lavishly praised the film's visual spectacle, while still noting the underdeveloped cast of characters and poorly explained plot.

The American-release DVD has been out of print for several years at this point, but you can still get a copy for a reasonable price. It's definitely still worth watching for the high-budget, elaborately surreal animation.

Not the answer you're looking for? Browse other questions tagged story-identification aliens robots anime or ask your own question.

3
Two weird characters on a space ship, strange and bizarre anime short
8
Alien movie with long-legged dude
11
Old anime I saw about 15 years ago with transforming characters
3
Anime about a boy with black hair and a 10 foot tall grey robot
4
Anime: people are on a space ship that never lands, something aboard the ship that's very dark, old enough to have been on VHS
7
Old story about New York City having become “Black New York”
7
Anime/Cartoon with a Giant Police(?) Robot
4
Old anime TV series with flying mechanical ships and dragons