During the Dominion War, why do they keep saying the entire quadrant is at stake?

Why do they always say the entire quadrant is at stake, when obviously the entire Federation combined with the Romulans, the Klingons, the Cardassians, the Breen, and the Ferengi is still a small fraction of the Alpha quadrant.

star-trek star-trek-ds9 star-trek-dominion
Share
Improve this question
edited May 30 '16 at 1:31

You're absolutely right. The quadrants of the galaxy are very large and the superpowers of the Alpha Quadrant represent only a very small proportion of that space. On top of that, the Federation is continually discovering entire solar empires within their own borders, so they can't even claim to be fighting for the whole of their own territory, let alone on behalf of the entire Alpha Quadrant.

What you're looking at here is a mixture of hyperbole and simplification. Assuming the Dominion force can flood freely through the wormhole, it's likely that once they've dominated the Federation, Klingons and Romulans that they'll attack other states outside the current known territories of the Alpha quadrant superpowers. 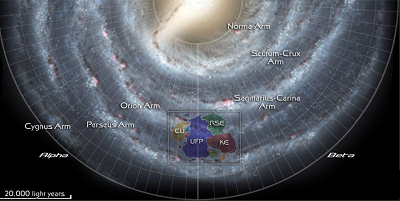 Basically, for the same reasons people today often say that global warming will destroy the planet when it's really the biosphere (in its current form) that's on the line.

Not the answer you're looking for? Browse other questions tagged star-trek star-trek-ds9 star-trek-dominion or ask your own question.

18
How common were non-Federation replicators?
10
Was there any mention in Star Trek canon or non-canon novels of any encounter between the Borg and Klingons or Romulans?
1
Why are there so many warlike races in Star Trek?
5
Why is the Dominion considered the Alpha Quadrant's biggest threat?
9
Why does the female changeling always appear in human form?
13
Why were the Romulans so blase about the Dominion after it gained a foothold in the Alpha Quadrant?
5
Are the Cardassians (and Breen) required to withdraw from their homeworlds?
8
Were the other Alpha-Beta quadrant powers aware of the Q?
27
If the Dominion rule using their Jem'Hadar troops, why is their life expectancy so low?
4
Are there any Vulcan Battlecruisers shown in canonical Star Trek?