The curious case of Dmitri Valtane

In the Voyager episode "Flashback", we learn that Tuvok was once a junior science officer aboard Sulu's Excelsior, and that he had been present at the moment of death of Lt. Cmdr. Dmitri Valtane during the events of Star Trek VI: The Undiscovered Country. 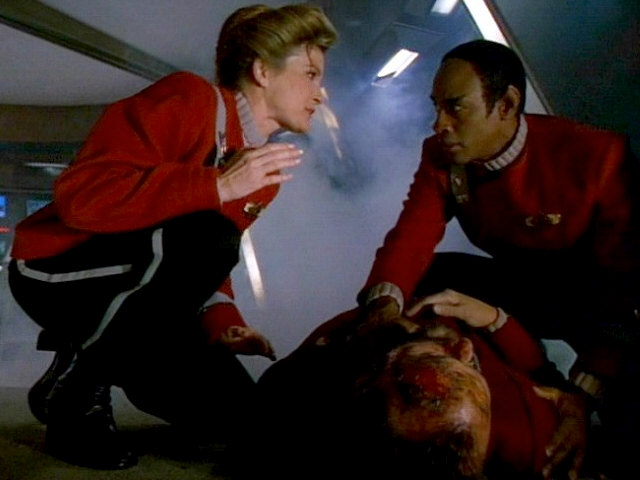 If we follow the events as they were presented in "Flashback", then Valtane would have died well before the Excelsior arrived at Khitomer to aid Kirk's Enterprise in the film's climactic battle.

However, at the end of The Undiscovered Country, we see Valtane alive and well on the Enterprise viewscreen (he is the leftmost officer, with the goatee): 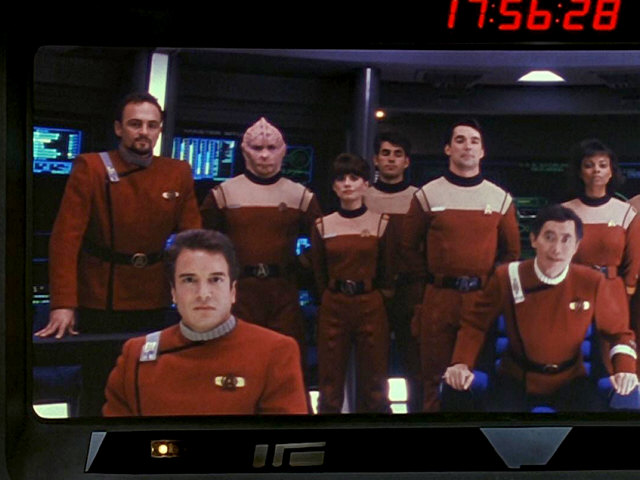 In-universe, what is the truth regarding Dmitri Valtane? Did he survive the events of Star Trek VI or did he perish on the bridge of the Excelsior, only to appear as some kind of...Force ghost?

According to Memory Beta, the wiki for licensed Star Trek works, including novels, comic books, RPG sourcebooks, video games and any other licensed works:

Following Captain Hikaru Sulu's attempt to cross into Klingon space and rescue Captain James T. Kirk and Doctor Leonard McCoy from the Klingons, the Excelsior came under heavy fire from Klingon warships. According to Tuvok's virus-affected memory of the events, Valtane was killed in the battle when a console exploded. However in reality, Valtane survived the attack and was later seen on duty when the Excelsior joined the Enterprise-A in orbit of Khitomer.

This version of events is further substantiated in the licensed novel The Fearful Summons:

Sulu looked up at Commander Sencus. When his original science officer, Masoud Valtane, had been transferred to another assignment...

The Fearful Summons was written by Denny Martin Flinn, who is credited as the co-writer of Star Trek VI: The Undiscovered Country.

On the one hand, this substantiates Valtane's survival in the eyes of one of the movie's creators. On the other hand, as one can see by Valtane's change in first name, The Fearful Summons was published before Flashback was aired; the Voyager creators didn't feel themselves beholden to Flinn's interpretation.

Out of universe, this appears to have been an oversight; the Voyager creators either overlooked Valtane's appearance at the end of the movie, or simply failed to establish his survival on screen.

In-universe, we are left with a contradiction. With or without the off-screen evidence, the best reconciliation between the contradictory inputs appears to be the explanation provided by Memory Beta.

Not the answer you're looking for? Browse other questions tagged star-trek star-trek-voyager the-undiscovered-country or ask your own question.

2
Is there an explanation for the contradiction between "Voyager" and "The Undiscovered Country"?

23
What was the motivation behind the conspiracy in Star Trek VI?
22
How unique are the adventures of the Enterprise within Starfleet?
11
Was Qo'noS evacuated?
5
How did the Klingon court get Kirk's personal log?
10
Why didn't Starfleet deploy emergency holographic troopers in case of a Borg landing party?
34
Why does Starfleet allow racism and speciesism?
15
Did Kirk's captaincy of the Enterprise have a canon starting date in TOS?
11
Does Star Trek VI: The Undiscovered Country imply Klingon cloning?
5
Star Trek VI - Why were the crew of the Enterprise looking for two pairs of boots?