Book about Gargoyles and Ethics

This was about 20 years ago.

The story concerned a rogue who had been cursed with a gargoyles arm (obsidian glass appearance). The aim was that in order to remove the curse he had to behave ethically... as defined by the gargoyles who had a sense of ethics that was not in alignment with humans. The area affected by the gargoyle transformation grew as he behaved 'wrong' and shrank if it was 'right'.

At the end the guy did something classically heroic and is punished for it.

I've always wondered if it was part of a longer book.

Using Mithrandir's comment, it looks like the gargoyle is named Spar and the rogue is named Gorlen and it's in the March 2009 issue of The Magazine of Fantasy and Science Fiction. Here's an excerpt from a review of one of the later issues that references the story:

“Quickstone” appeared as a novelette in the March 2009 F&SF. The backstory of the maiden Gorlen deflowered (Plenth is her name) is told, which angered the priest of Nardath to curse both he and Spar. Plenth has not been mentioned in previous stories until now, and only now as a story within this current story. Otherwise, there are no females here. First appearance of Spar, the gargoyle who was cursed to trade his stone hand for Gorlen’s flesh and blood hand.

Apparently, the tales were collected under the heading of The Tales of Gorlen Vizenfirthe

The first Gorlen story was a novel, long since lost to time (written in the author’s teens and shredded in his twenties). In that novel of origins, the young bard Gorlen Vizenfirthe was given the typical task of saving the world. To keep him on track, one of his fingers was cut off and replaced with the stone finger of a gargoyle. As long as Gorlen kept on his quest, the stone was limited to his finger; but if he strayed, or tried to avoid his duty, the stone took over more of his flesh. By the time he had finished saving the world, the single gargoyle finger had become an entire hand. Assuming the corresponding gargoyle had seen similar transformations in its flesh finger, Gorlen sought this nameless goyle in hopes of arranging an exchange. The gargoyle’s name turned out to be Spar, but Spar had no ability to undo the magic of the priest who had done the deed in the first place. Together, they now seek this itinerant mage, hoping for restoration to their original forms.

This sounds like Quickstone, by Marc Laidlaw, in the March 2009 issue of The Magazine of Fantasy and Science Fiction. (cover at the bottom) You can buy a copy here.

Gorlen has his arm switched with a gargoyle named Spar. At the end, the goblins are destroyed by their deity, except for Spar and Gorlen.

The description in the magazine:

When the bard Gorlen returned to F&SF in our August 2008 issue, we promised you'd be seeing more of him soon. Promise delivered (and there's more yet to come!). If you haven't read any of the previous stories in this series, dive right in - you should have no trouble following this story of the bard with the gargoyle hand.

A scene with both the switched limbs:

"I owe then nothing," Gorlen said, "Except this."
He held up his right hand.
Spar sat for a moment regarding the black digits with something like adoration and pity. He reached out first with the white flesh hand, then drew that back and put out his stony left hand to touch its prodigal partner.

At the end, when the other gargoyles are destroyed:

The blazing blood of the God engulfed the platform like a sea wave smashing on a rocky shore, washing away the other goyles. 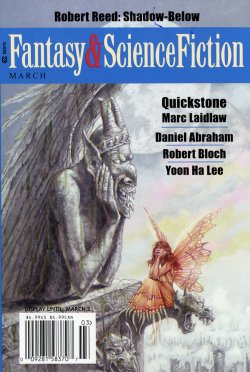 5
Book about magician apprentice and stairway
8
Book about symbiosis in cave between man and alien
1
What the name of this book? Main character at relative's apartment, becomes leader of gargoyles
3
W40k book about Tyranids and astartes