Where is Godric's Hollow?

In the Harry Potter books (specifically, HP and the Deathly Hallows), Godric's Hollow is the home and/or birthplace of a great many famous British witches and wizards - maybe even all of them.

But where exactly is it? Do we know any more than just "somewhere in Britain"?

We do know a little bit more, and it's been best summed up already on the Muggles' Guide to Harry Potter:

In Harry Potter and the Deathly Hallows, we are told that, in A History of Magic, Bathilda Bagshot writes that Godric's Hollow, a "West Country village," 1 is one of a number of villages where wizards settled in relatively large numbers after the ratification of the International Statute of Secrecy in 1689.

And there's mention of part of Hagrid's trip from the Hollow to Little Whinging:

At the start of the story, Hagrid brings back the one year old Harry Potter from Godric's Hollow to Privet Drive in Surrey on a flying motorbike. He says to Professor Dumbledore and Professor McGonagall that Harry "fell asleep as we was flyin' over Bristol."

Pottermore just gives us the generic info found in the Bagshot quote: 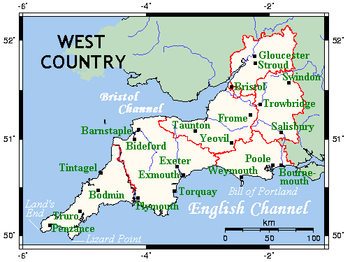 Commenters have indicated several other possible routes Hagrid took, which shows that our known location for the Hollow is still too vague to pinpoint a more specific location.

1See @Au101's anwser for the precise location of this quote.

For the record, I also searched Accio Quote and Rowling's Twitter account for more insight, but came up empty.

To acknowledge @ibid's answer, some clue may exist in the sorting hat's song, regarding Godric being born in a "wild moor", but unfortunately no other clues exist to indicate whether that refers to an actual named moor. However, combining that with some ideas from @January's answer, I've come up with my own best guess:

Keep in mind, this part is just my guess and not the canon answer.

I'd say Godric's Hollow is possibly somewhere in area of Exmoor National Park.

I can go a bit better than "somewhere in Britain":

Most celebrated of these half-magical dwelling places is, perhaps, Godric's Hollow, the West Country village where the great wizard Godric Gryffindor was born, and where Bowman Wright, wizarding smith, forged the first Golden Snitch.

(Bathilda Bagshot writing in A History of Magic)

(based off of what people are saying in the comments, this is probably either Dartmoor or Bodmin Moor)

Quoting from the sorting hat's song:

A thousand years or more ago,
When I was newly sewn,
There lived four wizards of renown,
Whose names are still well known:
Bold Gryffindor, from wild moor,
Fair Ravenclaw, from glen,
Sweet Hufflepuff, from valley broad,
Shrewd Slytherin, from fen.
(Harry Potter and the Goblet of Fire - Chapter 12 - text available on Pottermore)

For Harry Potter related location questions, a good place to start is Location, Location on the White Hound Fanfiction site. They try to consider all the existing clues, fairly neutrally, and often give a surprisingly precise location of the relevant place even based on a very few clues.

For Godric's Hollow, in particular, they give some more details than just "West Country":

We can also say that Godric's Hollow is probably towards the north side of the West Country, or at any rate not on the southern side, because if it were on the south side then going via Bristol would involve a considerable detour.

This rules out Dorset (which is too far south). Cornwall is unlikely for linguistic reasons (it's too Celtic, and would not have Anglo-Saxon place names such as Godric's Hollow, especially not in the Middle Ages).

They note then one crucial passage that had not been mentioned in any of the answers previously:

The phrase "halfway out to sea" does not make much sense for something right on the coast (it's either to sea, or it isn't), and does not make much sense for something very far from the coast (as halfway to coast would still be well on land). They then consider when would that phrase make sense, and then several other geographic clues; I will not summarize any more (it is better to just read the linked article itself).

Their end result, however, is well worth quoting:

The most likely location for Godric's Hollow is somewhere near Weston-Super-Mare in Somerset: either near (but not on) the coastline facing into the Severn Estuary, or on the estuary of the River Parret which feeds into Bridgewater Bay a few miles south-west of Weston-Super-Mare. Hagrid passed over Bristol en route to Little Whinging because he used the motorways as a guide, picking up the M5 near Godric's Hollow and following it to Bristol, and then the M4 from Bristol to Heathrow.

(They have figured out that Little Whinging is near Heathrow in a separate article. I will not describe their reasoning in detail here, but basically it is the only part of Surrey that is remotely near the described railway.)

They do not appear to have considered the tiny triangle NW of Bristol - which is strange as they typically consider all possibilities, however unlikely. It definitely fits their clues (including the "halfway to sea" one) just as well (as far as I can tell, anyway).

As for the wild moors - one would suppose that what was wild moors ten centuries ago might not necessarily be so today. This particular one seems to be what is now known as Sedgemoor.

I believe that he lived somewhere in the county of Devon. Devon has Dartmoor and a small part of Exmoor. There were lions in Devon too, 1,300 years ago. North Devon is at the end of the Bristol channel and at the start of the Celtic sea. And m5 begins at Exeter. In mid Devon there's cottages. And halfway to the sea, indicating he's still in land heading to the sea. Or else it would had said halfway of the sea. And in the song it says 'wild moors' dartmoor had a lot of bronze age animals (lion) before (1300 yrs ago). It was wild.

So actually you're pretty accurate to where Godric's Hallow might be. 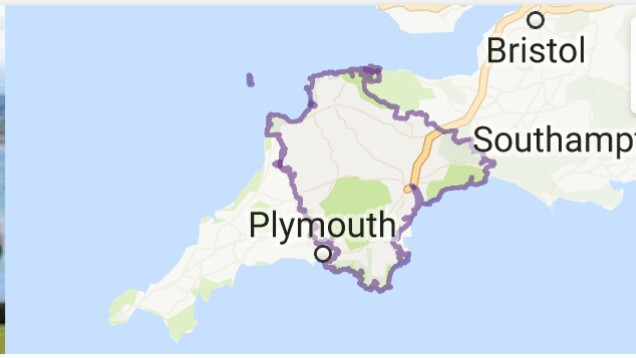 19
Do the Harry Potter books ever contradict themselves?
21
Where were Hufflepuff, Ravenclaw & Slytherin from?
2
Everyone is from Godric's Hollow?

31
How could Nagini seem to see Harry and Hermione through the invisibility cloak when they visited Godric's Hollow in Deathly Hallows?
8
Did the Wizarding World learn about Voldemort's Horcruxes after his defeat?
2
Is it illegal to do magic outside of Hogwarts?
2
Where did the Deathly Hallows originate and how did they move across Europe?
14
Why did Dumbledore choose this verse for Kendra and Ariana's tomb?
13
Why didn't Harry Potter use the Disillusionment Charm?
5
Where can I read the text on the Jelly Belly brand Harry Potter chocolate frogs?
8
Why didn't the Avada Kedavra cast at Harry at Godric's Hollow come out of Voldemort's wand during Priori Incantatem?
6
How was Hagrid supposed to bring Harry from Godric's Hollow to the Dursleys?