Why did the stormtrooper helmets change from the t-visor to the curved eye-sockets?

In the Star Wars movie A New Hope - we see stormtroopers with helmets like the following: 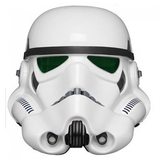 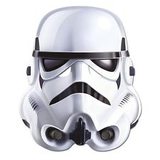 Then in the Star Wars movie The Clone Wars - the helmets are shown as T-visors: 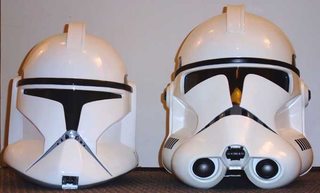 My question is: Why did the stormtrooper helmets change from the t-visor to the curved eye-sockets?

The accepted in-universe answer of the original designs being uncomfortable due to the Kaminoans unfamiliarity with human ergonomics is far less interesting in my opinion than the out-of-universe explanation that fuels it.

According to the StarWars.com Databank (as pulled from the Way Back Machine in July of 2011):

The titular clone troopers of Episode II were designed to strongly hint at their eventual evolution into the Empire's stormtrooper ranks. As envisioned by creator George Lucas, the prequel trilogy would showcase the evolution of fighting forces, starting with battle droids that were clearly flawed. The clone troopers were the next step in the evolution, and Concept Artist Jay Shuster worked on the armor designs. "It follows the formula for a lot of the prequel trilogy," says Shuster. "Take something pre-conceived in the existing trilogy and de-generate it."

That Boba Fett's armor had some connection to the stormtrooper pedigree had long been a vague assertion in Star Wars lore. Design Director Doug Chiang's concept art focused on this connection, melding features of both armors into the finished clone trooper design. R. Kim Smith and Michael Patrick Murnane built a concept model of the clone trooper which implied that this first generation armor was thicker and bulkier than the lighter armor worm by the stormtroopers. This design concept was carried through by the Episode III Art Department, that further progressed the look of the clone troopers closer to the stormtroopers of the original trilogy, including variant designs that gave obvious nods to the sandtrooper, scout trooper and snowtrooper designs.

Far more than a silly in-universe excuse about a race of futuristic biology experts known galaxy-wide as expert cloners getting confused about how their clones move in their armor, this is about George Lucas wanting to devolve the original stormtrooper helmet into something resembling Boba Fett and then inching closer to the original stormtrooper design with each iteration.

I have seen something where the Kaminoans didn't know too much about human biology and created the helmets thinking they would do the job.

The Phase I armour proved uncomfortable for the troopers to fit in, which was due to the Kaminoans unfamiliarity with human ergonomics.

However over time this proved not to be the case and the designs were modified. Starting with the Phase 2 armour where the T shaped visor started to become more rounded and reminiscent of the helmets worn by Stormtroopers.

The Stormtrooper helmet removed the down part of the T and further rounded the eyes out.

This either provided a bonus in vision, though as all helmets contained HUD this would probably be negligible.

Or they wanted the storm troopers to look different enough from the clone troopers to show that these are the soldiers of the new Galactic Empire, replacing the clones that would represent the old, decadent, bureaucratically crippled Republic.

Not the answer you're looking for? Browse other questions tagged star-wars the-clone-wars a-new-hope stormtroopers or ask your own question.