I don't recall much about the show, and I think I only ever saw one episode, and my Google Fu is not up to snuff today. The episode, most likely the pilot, came out around the same time as Babylon 5 and then just disappeared.

From what I remember the show was about the (small) crew of a ship. The cockpit of the ship was a upright bed-like contraption, and the cast were investigating a ship that had a radiation leak or something adrift in space.

There was a cast member who could shape-shift, similar to Odo from Deep Space 9, and another member was a barbaric warrior. There was some sort of mystic stuff, but I may be confusing that with Babylon 5.

Overall the show was very similar, in my memory, to Deep Space 9 and Babylon 5 so I may be confusing things, but I do remember how I saw the similarities in the show to those shows and knew it wasn't the same show.

Space Rangers has the barbarian aspect and I believe it also had an odd, forward facing bed for the pilot. Not sure about the shapeshifter element.

I did find a pic of the pilot's chair. 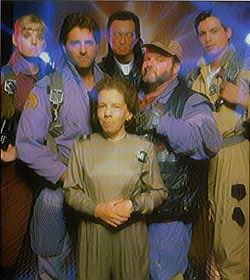 In the year 2104 the Earth colony Fort Hope on the distant planet Avalon struggles to survive. A small force of police/marines called the "Space Rangers Corps" are the first, last and only line of defense for the colonists against crime and the perils of interstellar exploration. The series concentrates on Captain John Boon and his team of Rangers aboard Ranger Slingship #377.

10
Identify this television series where pilot massages his own heart?
6
Cyborg with heart in a box, loses his cyborg arm in gunfight; handsome guy that sleeps in green goo