There must be several levels. In the US Army there is the private (new recruit) all the way to general.

For the boring version go to here to Wookieepedia:

Stormtroopers apparently use the same rank system as the Imperial Army, but rarely wear any type of outward insignia. It is mentioned that Stormtroopers most likely have an identification scanner, built into their helmets, which can determine the rank and seniority of other stormtroopers. This does not explain, however, the colored shoulder pads used by Stormtroopers on Tatooine. Also, in the Battle of Hoth, a stormtrooper is seen wearing the insignia of an Army Captain on his armor. It is assumed that such insignia display is for the benefit of non-stormtrooper personnel.

In the higher ranks of the Stormtroopers, it can be reasonably assumed that the senior Stormtrooper officers do not wear the Battle Armor on a regular basis, thus a different uniform, for the more casual "office" setting, would most likely be worn. This explains a number of Imperial officers, seen in the feature films directing groups of Stormtroopers, who appear to be wearing solid black uniforms with rank badges. Such personnel are most likely Stormtrooper commanders whose daily duties do not necessitate the regular wearing of battle armor.

If you click on the links you will see additional examples of people both non-canon (EU) and in-canon in each rank.

Based on some books like the Star Wars visual dictionary, battlefront and other sources here is my interpretation of the Stormtrooper Pauldron ranks. Seems to make sense to me.

So the Storm Trooper Corps Rank are and pauldron colors are: 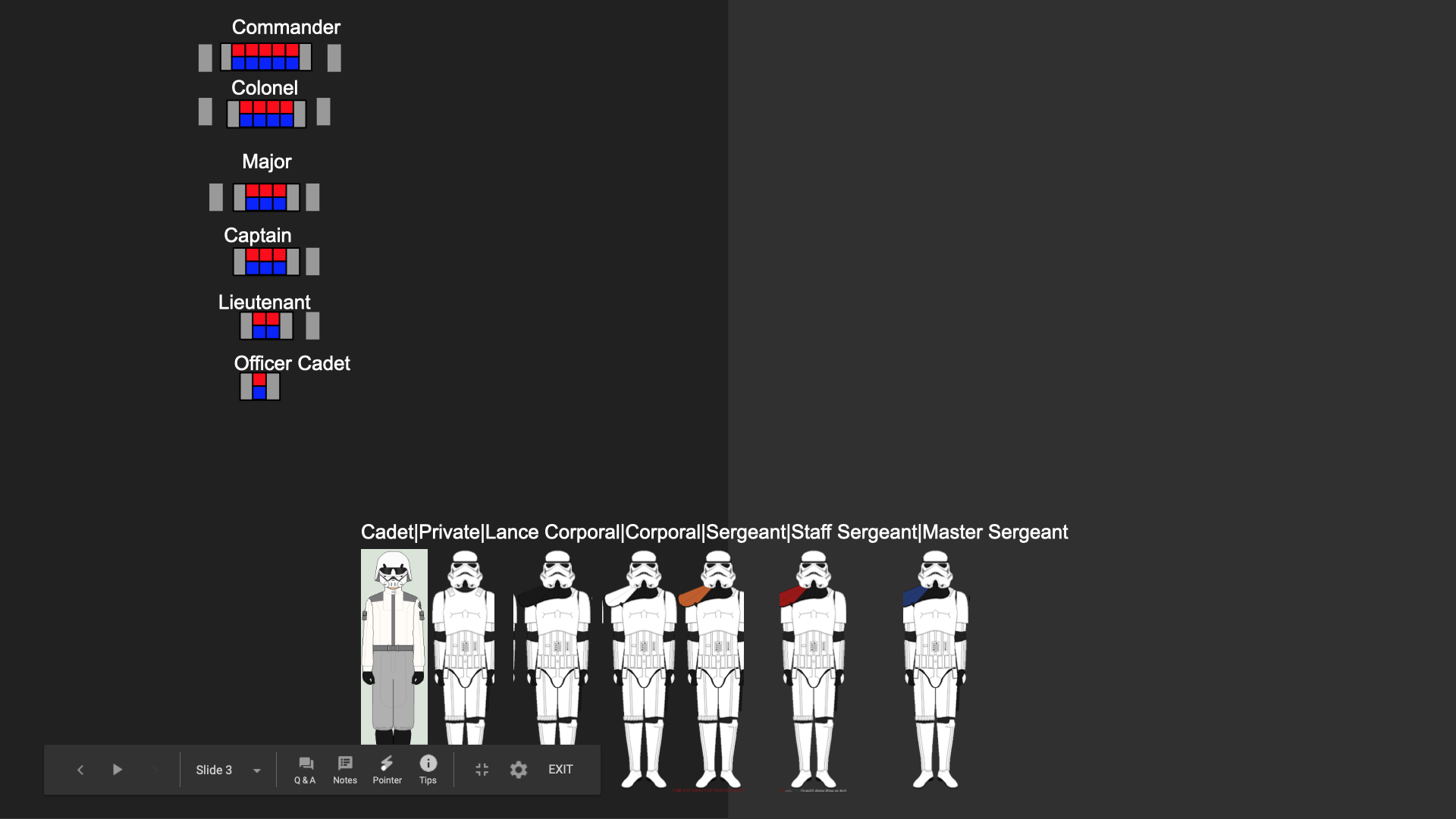 They would lead teams of seven Troopers and one Corporal. The Corporal acted as the Sergeant's assistant squad leader and conducted all administration within the squad.

The squad consisted of two fire teams - Alpha and Bravo. In a flanking attack, Alpha the (Sergeant and four other troopers) would conduct the assault on the objective while the Bravo Team - the Corporal, 2 Gunner Troopers armed with FWMB-10 repeating blasters and a Marksman armed with a F-11D enhanced scope - would provide fire support (base of fire) to the assaulting team.

A Stormtrooper platoon consisted of:

37
Why did the First Order's army of stormtroopers need a pep talk?
31
Do we ever see regular (non-stormtrooper) ground troops?
6
Where does Leia stand in the resistance command structure?
8
When did the coloured shoulder pauldrons on stormtroopers first appear?
4
Why do the First Order stormtroopers have better aim than Empire Stormtroopers?
52
Why are stormtroopers stationed outside the Death Star near the turbolaser batteries adjacent to Bay 327?
17
How are Stormtroopers uniforms cleaned?
8
What is the Imperial Navy rank structure and where was it inspired from?
5
Is the Gungan military rank of Bombad General roughly equivalent in stature to General in other militaries?
4
How did the stormtroopers know which Jawas captured the droids?