What do the badges on Kirk's dress uniform represent?

In the image below are Kirk and Dr. McCoy in their dress uniforms. What do the badges on their uniforms represent, both in general and individually? 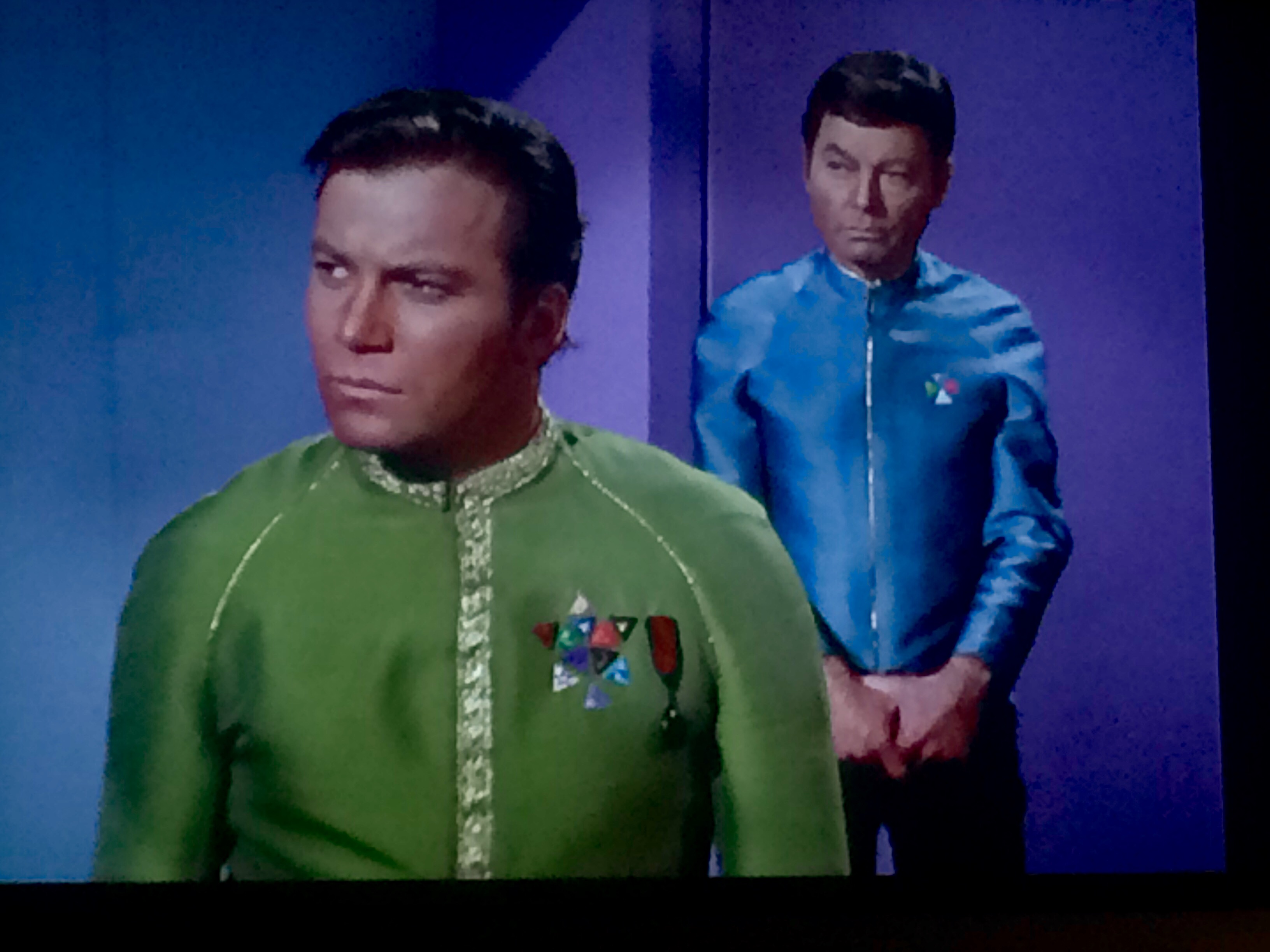 Here is a close-up of Kirk's cluster of patches: 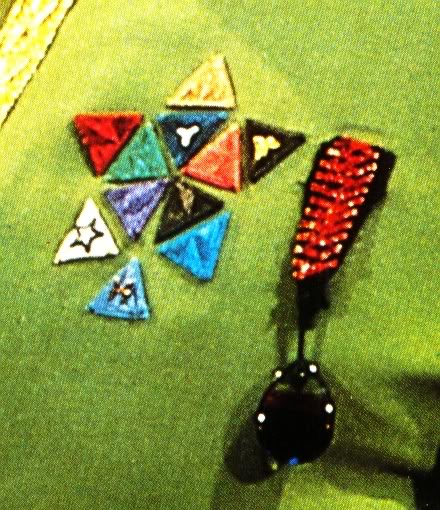 In the episode "Court Martial" (which is the source of the screen grab in the original question), Kirk's awards to date were listed during his trial by the ship's computer:

Given the number of coloured patches and their placement over the left breast, I believe they represent Kirk's awards. Note that "Awards of Valour", as given by the computer, is plural. Assuming there were two of them would make for 12 awards and 12 corresponding patches (including the ribbon).

The same would be true for McCoy's. According to the official StarTrek.com entry on McCoy:

By that first year [on the Enterprise] he had already won the commendations of the Legion of Honor, Awards of Valor, and was decorated by Starfleet Surgeons.

Again, there is a pluralization on "Awards of Valour". Based on the number of patches on McCoy's garment, it seems that by his first year on the Enterprise, he had earned one Legion of Honor, one Starfleet Surgeons decoration, and two Awards of Valor — 4 patches in total.

A user at the Star Trek Uniform Club Forum has, in this thread, painstakingly matched each patch to its award, by comparing various dress uniforms appearing in TOS (such as Commodore Mendez in "The Menagerie") and by consulting folks in charge of Star Trek prop auctions. The user came up with this mostly complete dictionary (click to enlarge): 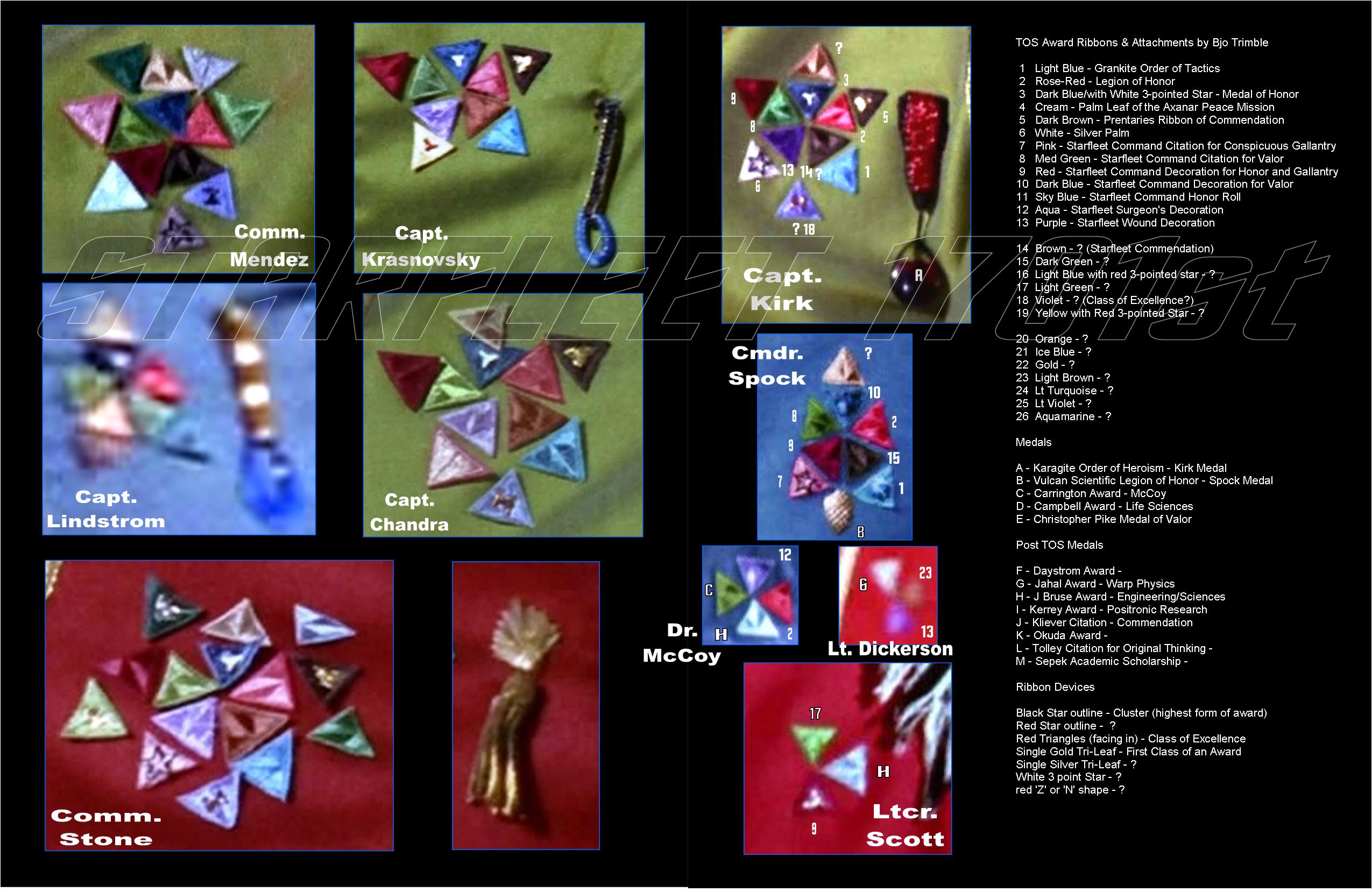 These are the equivalent of the "salad bar" that contemporary servicemen wear on their uniforms. Each badge on Kirk's and McCoy's uniforms signify an award.

According to the Memory Alpha wiki, Kirk is wearing:

NB - from the script, it's a bit ambiguous whether the "Class of Excellence" is a separate award or a specific class of another award:

Note, each officer seems to be wearing more badges than there are awards listed. This is probably because not all of them were mentioned in the episode.

First I see a Maple Leaf ( considering he is Canadian ) Second I see the representation of 100 years of Canada logo: 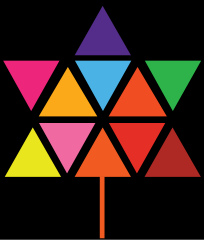 — Wikipedia: Logo of the Canadian Centennial (1967)

Not the answer you're looking for? Browse other questions tagged star-trek star-trek-tos star-trek-uniforms or ask your own question.

45
What does the Starfleet insignia represent?
22
What's the Chain of Command on Kirk's Enterprise?
8
What are those boxes on the uniforms in TMP?
4
Where do they get the costumes from in TOS?
18
Is there an in-universe explanation for the uniform change in Mirror, Mirror?
31
What is Captain Kirk's secret pain?
13
Discrepancy in uniforms around the dinner table: ST:TOS “Space Seed”
2
Why isn't there any consequence of Kirk's actions in “The Enterprise Incident”?
13
What is being eaten by Kirk and company in this scene?
8
When did Kirk time travel before the events of The Voyage Home?