I am trying to find the title of a book/series written approximately 20-30 years ago, and I can't remember the author.

The series involved a young nobleman/prince who fell for a girl who had travelled to his fathers kingdom/estate. She was accompanied by a priestess. On their travels to some other place, the priestess becomes possessed by a demon who had transformed itself into a spider and crawled down the throat of the priestess.

The demon is fomenting war in the kingdoms and somehow manages to trap the young girl in some kind do underworld where the young man travels to try and save her. At the same time there is some kind of demon god trying to destroy or take over the kingdom/countries and there is the epic banding together of enemies of my enemy kind of theme.

Does anyone recognize the series and/or who author may have been? Many thanks.

What you are looking for is "The books of the Kingdoms" trilogy by Angus Wells. 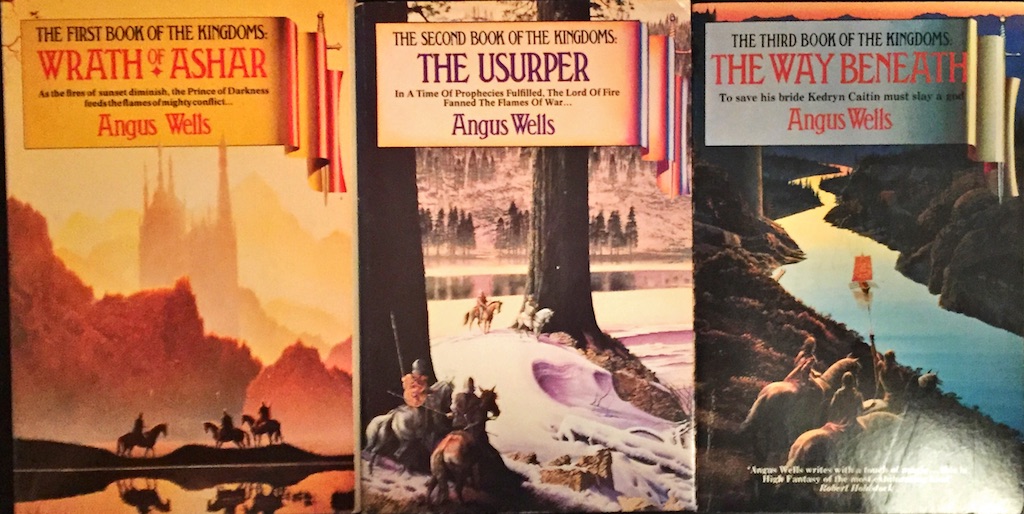 Blurb text from he back-covers of the books:

18
Looking for a book series about a girl and her friends captured and sold as slaves
10
Trying to recall the name of a young adult dystopian fantasy novel from late 90s / early 00s
7
Identify Sci-fi book set in Australia
6
Looking for name/author of a book series with a lottery
7
Help: Fantasy magic book series male genius similar to Name of the Wind
7
A story about a demon who has to steal a jewel to free his sister
3
Anime in which 4 school children go into a game and rescue the world; they meet a pink-haired girl inside the game who helps them
6
Isekai anime with neveraging Kings and Queens, and kingdom's people born from a tree on a mountain