Was Gordon Walker based on Blade?

In season 2 of Supernatural, we meet hunter Gordon Walker who ends up fighting vampires. I began wondering if this character was influenced by the Marvel comic book character Blade, who also fights vampires, and the two vaguely resemble one another in outward physical appearance and build.

In season 3, Gordon Walker even became

Have those involved with making the show commented as to whether Gordon was based on or influenced by Blade? 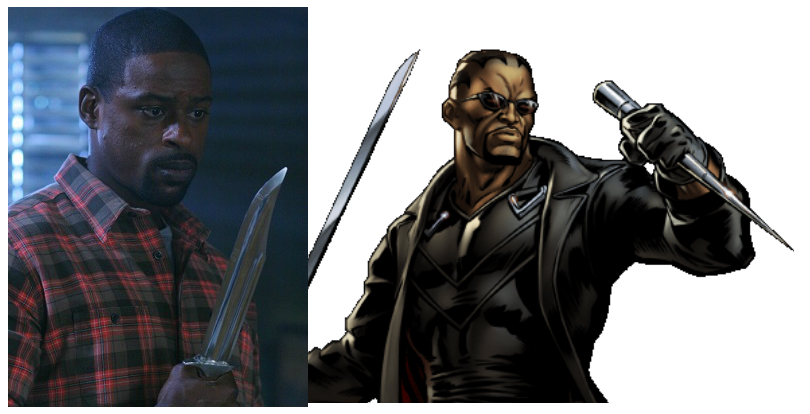 I think that the producers did not base Gordon on Blade, but it is more like a nod to Marvel's character "Blade". Both are African-American vampire hunters (like you stated). And also, Gordon's last name "Walker" hints at Blade whom the vampires call "Daywalker" for his ability to walk in daylight (Blade is half vampire). The producers did not give any special hints on this subject, but the fans are quite used to the different nods given : for example, in the Season 7 episode 23,

which is a clear nod to the series "Family Guy".

Not the answer you're looking for? Browse other questions tagged marvel supernatural character-similarity blade or ask your own question.

3
Was Riker based on Kirk?
6
Would a vampire bitten by Blade become a daywalker?
3
Does Blade age? Can he die of old age?
5
Is Principal Wood inspired by Blade?
11
Are there any plans to bring Blade into the Marvel Cinematic Universe?
3
How much of The French Mistake was based on fact?
3
Did Blade also have vampiric mental powers?
2
If Blade (the film version) were to procreate with a normal human, would the offspring gain his powers?
1
In the Blade Films why is EDTA able to destroy La Magra but has no effect on Reapers or Jared Nomak?
9
In the comics is Blade known to have a particular accent?