Captain Cold. What is so special about the cold gun?

Talking here about the TV Show series of the Flash, I can't help but failing to see what is so special about the cold gun and whether it is just plot hole of whether there's something in the comics (or in the show) that justify people reaction to Captain Cold.

The gun, as described, only provides a freezing gun with limited range, limited burst power and nothing particularly special about it. One could argue a machine gun is way more dangerous both in terms of it effectiveness against the Flash (burst power alone increases the chance of at least one bullet hitting the target) and against others.

I fail to see the point of the episode where Cisco needs to provide a shield to the police to counter the effects of the cold gun instead of having the police just shoot from distance (I.e. Use a sniper and take him out). Same thing applies to the Flash himself, just super speed pass fast enough and take the gun away from him, if you can do it for a standard gun, why can't you with the Cold gun?

Is this just a plot hole or are there any additional powers in the comics not mentioned in the show?

The DC Comics Database says this (emphasis mine):

Captain Cold built a gun, based on a cyclotron, which emitted blasts of ice and cold. It has the ability to cause the molecules of its target to reach absolute zero, causing molecules to stop moving. The body can be re-animated with no damage to the subject by reactivating the molecules. This is different from Mr. Freeze's gun, which Cold considers sloppy, which somehow changes the chemical makeup of the victim to become ice.

The gun can also slow down areas of air, which Cold uses to put nets around to slow the Flash down when he attempts to run through.

The big deal is its potential to slow the Flash down enough to make him vulnerable to attack by either cold blasts of the gun itself or by other means.

In the comics, the gun generates a "cold field" that slows the Flash down enough for him to react before the Flash can take the gun: 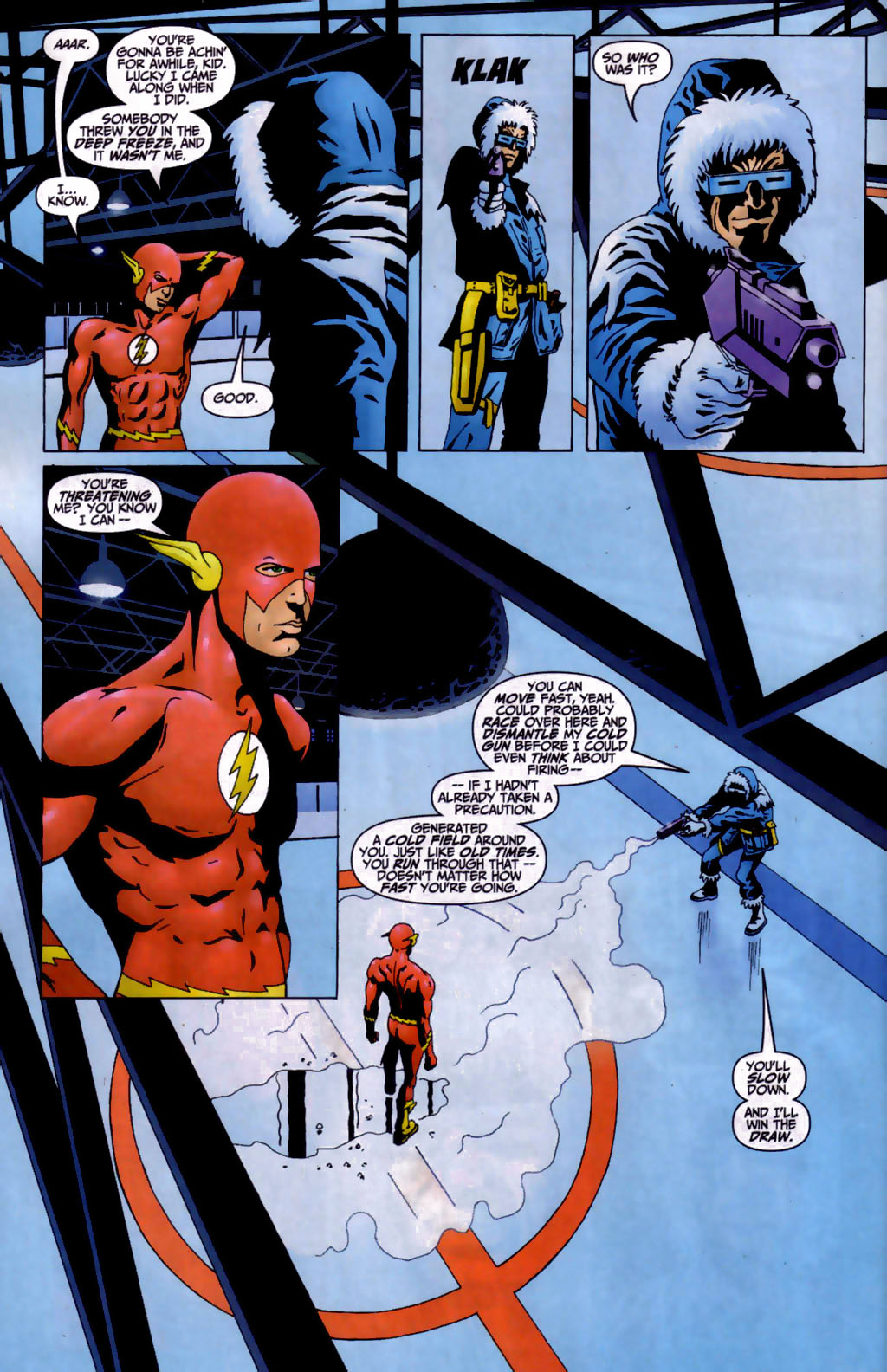 This isn't mentioned in the Flash TV show, to my knowledge. Probably because it's hokey and weird. The problem with NOT mentioning it is that there is now no explained reason to jump through so many ridiculous hoops to stop him.

To respond to your comment about the shields that Cisco provides, it makes more sense if you think of it as a replacement to standard body armor. Even though a bad guy with a gun can be taken out by snipers or a well-organized raid, doesn't it make sense to still provide them with body armor just in case it takes more time than anticipated for your sniper to get a good shot or something unexpected happens?

7
Does the Flash slip on ice?

6
Why did Superman & Supergirl start to suffocate instantly when Luthor made our yellow Sun red?
15
Why did Captain Cold decide to call out Flash in public in "Revenge of the Rogues"?
7
What did Captain Cold initially request from Barry in The Flash S01E22?
22
What is Barry Allen's aka The Flash's top speed?
0
What makes Captain Cold and Heatwave teammates?
21
Is Zeus alive in the new DC film continuity?
8
Why didn't a time wraith attack Eobard-Wells?
10
If he has the Wisdom of Solomon, why does Shazam make so many foolish mistakes in the 2019 film?
5
Is the Smallville universe seen in the CW "Crisis" crossover an alternate reality from the Smallville universe we know?