I'm looking for a novel I once read with a plot that involved the American and the Russian scientists developing a biological weapon. It was to be used against a limited number of the Earth's population to try and stop conflict on Earth by making people think that they were being invaded from space. The term 'Common Enemy' comes to mind.

The rationale was to pick two similar sized cities in America and Russia of roughly a population of 1 million in each and to use the weapon on each city simultaneously to wipe out the population and then blame an alien invasion. It was determined that this action would stop all conflicts on Earth and focus attention starwards thus achieving peace by tackling a 'common enemy'. The weapon was developed in complete secrecy after which all the scientists were eliminated so that the details were kept secure.

This is superficially similar to the plot of the graphic novel Watchmen.

Spoilers for the graphic novel, and some for the movie ahead and unmarked. The spoilers make up a substantial amount of this answer, and thus are not marked.

The main antagonist of Watchmen, Ozymandias (Adrian Veidt) plans to save the world by giving the world an external threat to prepare against. In the graphic novel, this threat is a supposed race of aliens, of which an initial 'invader' resembles an alien squid.

To this end, he collects a large number of artists, designers, writers, etc on an island. They are all hired in secret and sign NDAs that prevent them from discussing their new project, then 'disappear' completely voluntarily. They are pampered and treated well, and spend quite a while (up to and including a year, if I recall) working in secret. These creative people were responsible for developing the entirety of an alien species, from biological and sociological details to their history, mythology, aesthetics, and plans. These writers and creators, primarily from horror genres, are told this is part of a massive horror project which will redefine the genre, and all participate enthusiastically.

When they have completed their work, Adrian eliminates them all.

Adrian loads all of the information these artists have created into the created mind of a genetically-engineered creature that resembles one of the species the artists developed. This creature has a brain that contains enormous psychic potential. The creature plan is for the creature to then be teleported into the middle of New York, using a device Adrian's company has been developing in secret. The teleporter is known to be ineffective, killing the teleported subject on arrival. The squid is engineered such that on its death it will send out a psychic shock that will kill huge amounts of nearby people and be felt by those who are psychicly sensitive around the world. Those who are sensitive will also receive portions of the knowledge uploaded to the squid.

Adrian's plan is for this to appear to be the first step in an invasion plan, only for the alien's teleportation to have unexpectedly failed and killed the initial invader. The knowledge sent out 'by accident' upon the invader's death would be spread across the globe, ensuring that all governments received independent confirmation of the data. Adrian's plan was for this to give the governments an exterior foe to focus on.

Some of his old allies (the protagonists of the comic) pieces most of this together over the book, and Adrian - seemingly in traditional supervillain fashion - helpfully fills in the rest of the plan for them when they confront him in his base (where he has just finished killing the scientists and researchers who helped him develop the genetic, psychic, and teleportation technologies).

The protagonists declare that they will stop him, leading to one of the most iconic panels in comic history. 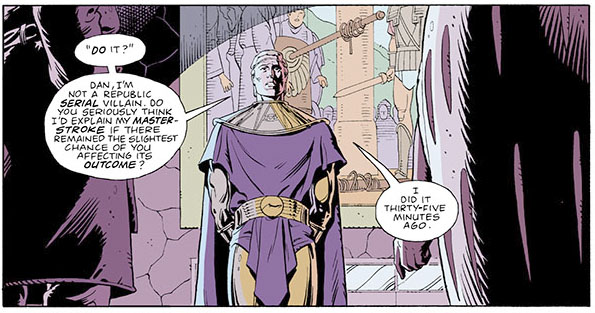 This meets most of the criteria in the question - the scientists and researchers working for Veidt were eliminated after they succeeded (as were the artists and writers who worked on other parts of the project), the 'villain' did create a biological weapon (the squid) to attack a city, and the goal was for the governments of the world to have a new, external, existential threat to focus on.

This is possibly Wild Card by Raymond Hawkey and Roger Bingham (1974).

Extract from synopsis on Google Books:

The United States is in factional anarchy - a Presidential aid comes up with a plan to unite the country by presenting it with an external threat - a group of super scientists are pulled together to realise the threat - the scientists aren't told the whole of the details - the threat is delivered - the President is a hero and the country pulls together.

The twist lies in a couple of the scientists finding out what they weren't supposed to know, and their attempts to make this knowledge available to the wider world

8
Space horror novel from 1990's (I think) where dead possess people and start to take over a planet
1
Novel about the rise of a man in a society where people were ranked from 100 to 1
11
Fantasy novel with terrifying trees where people were sacrificed to them cocooned alive and put inside them
5
Novel about energy beams from space giving people powers
12
Medieval fantasy book where an evil sorcerer tried to use magic to make the new weapon, a cannon, explode
19
short story about people from the future who think sci fi writers from the 50's were psychic
25
Scifi novel where people can use golems to be in multiple places at the same time