How could Janeway have used Holodecks as a child when they were new to Picard?

How could Janeway use Holodecks as a child when Picard and the rest of the Enterprise-D crew make it clear in TNG: Encounter at Farpoint that holo-technology is very new? For many of them it's the first time they have interacted with it and most of them are excited to use it. Data even demonstrates how it works in the confinement of the room by throwing a rock at the closest wall, which pixelates. He wouldn't do that if everyone was familiar with it.

12 years later, in VOY: Once Upon a Time with Naomi Wildman, Janeway relates a story where she flooded the whole forest while running the same program that Naomi now enjoys (Flotter and Trevis). Now, Janeway's exact age is hard to pin down but she must have been an adult 20 years before the start of the Enterprise-D's mission.

So how can she have used Holodecks as a child when it was brand new technology over 20 years later?

The episode you're talking about is "Once Upon a Time"--from the transcript here:

NEELIX: Right now, she's off to conquer a giant beetle.

NEELIX: She can handle it.

JANEWAY: She's a courageous girl. Did I ever tell you about the time I flooded this entire forest? I was six years old. Flotter claimed we were in for a dry spell so I came up with the obvious solution. Why not just divert the river? This entire forest was a swamp by the time we were done. At which point, Stinger was born.

Although the writers probably did intend to suggest Janeway had been playing the game on a holodeck at six years old (I'm guessing they just forgot about holodecks being portrayed as new at the start of TNG), this isn't stated explicitly, so if we want to reconcile it with the apparent novelty of holodecks in "Encounter at Farpoint", we could imagine the game had simply been ported over to Holodecks from some earlier, less advanced form of interactive game technology. It could have been played on a tabletop holographic projector like the one seen in this shot from "Loud as a Whisper": 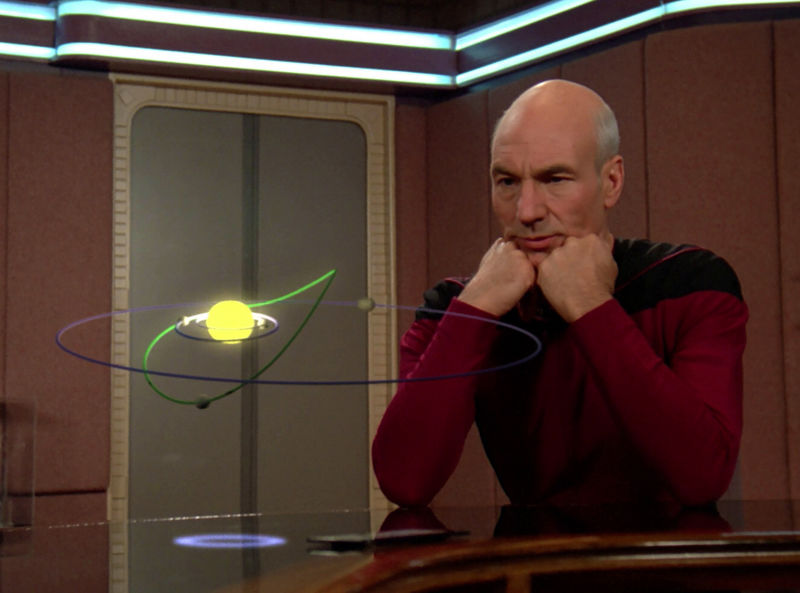 Or for a more immersive option, in the Voyager episode "Equinox, Part II" the captain of another lost Federation ship was seen using a technology called a synaptic stimulator that seems like it was feeding sensory information directly into the nervous system, you can see it starting at 0:33 in this clip:

However, the synaptic stimulator article seems to indicate that everyone on Voyager who was seen using one had acquired the technology in the Delta Quadrant, and in Equinox Chakotay seemed unfamiliar with them, so maybe this isn't likely...from the transcript:

GILMORE: Could you use a synaptic stimulator?

CHAKOTAY: Depends. What is it?

GILMORE: It's a neural interface you wear behind your ear. It taps into your visual cortex and shows you different alien vistas. Just think of it as a poor man's holodeck.

KIM: So that's how you kept yourself entertained.

GILMORE: Beats checkers. The Ponea gave it to us.

CHAKOTAY: Never heard of them.

GILMORE: We called them the life of the Delta Quadrant. They see every First Contact as an excuse to throw a party. I wish that we had encountered more species like that.

There was also the technology seen in the TNG episode "The Game" which projected an image over one's sight, it seemed to do so not by directly stimulating the brain but by beaming a signal into the eyes (maybe something like the real-world technology known as virtual retinal display):

In "Enterprise" we encounter holodeck technology some 200 years before the Enterprise D, and other federation ships come equip with it as a standard. It is not a new technology, simply new for Federation ships.

Enterprise episode Unexpected is the first encounter of holographic technology in 2151.

We see many races employ this kind of tech, the Ferangi for one have holo-suite tech, as well as the pleasure planet Risa, which is a favorite spot for vacations by humans.

It is not unreasonable that Janeway visited a planet side holo-deck apparatus prior to the introduction of this tech into federation ships. From what we learn in Voyager Holodecks are fairly integrated into ships systems, it could have been a massive undertaking to implement this tech into a starship.

I really like the other answers that surmise that Janeway had merely interacted with the same story using a different type of medium (a more visually oriented game, perhaps some VR-type glasses?) but it's fun to suppose up a story that lets both moments be entirely true.

First, we get those 12 years for free -- putting Janeway in her early 20s when Enterprise-D crew gets to use their holodeck aboard a starship. (+12yrs)

Undoubtedly, the technology was developed "shore side" first. Starfleet officers not posted to a planet might not have had a chance to encounter the technology. (+5-7yrs)

Further, holodecks have huge potential military uses (and we see such uses throughout the series) so we might be able to assume the technology was guarded during the early use. It may have been even banned from starships for fear it could fall into the wrong hands. (+5yrs)

At the very least, it may have been a half a decade to overcome technological issues to make holodecks viable on starships and gain widespread use. (+5-10yrs)

Still, would such a "dangerous" technology have been in use by a little Kathryn Janeway? Of course, her daddy was an Admiral! One of the ways to test new technology is through the use of child-like games (how many games existed on early PCs to demonstrate and test?) where it's impossible to get hurt but the technology's potential would be demonstrated in a safe manner.

Perhaps little Kathryn, when she wasn't taking ballet lessons, had a chance to visit her father at work and play with this new technology? (in the same way kids of scientists today might get to interact with their parents' projects -- certainly computers and the games)

Now, this is probably not what the writers would have imagined, which is probably that the technology was ubiquitous, but it is possible -- especially if you assume that Janeway may have been wrong about her own age when she ran the program, she could have been 9 or 10.

In star trek the animated series season 2, episode 3 The Pratical Joker. In this episode there is a room, called the rec room which is very similar to a holodeck.

Holodeck technology, in and of itself, was not a new technology at the time ST:TNG happened. The technology comes from around 2151. The other part of your question revolves around the age of Captain Janeway. There is no official acknowledgement or mention of her exact age.

As such, it is feasible that the technology could well have been available to her as a child.

Not the answer you're looking for? Browse other questions tagged star-trek star-trek-tng star-trek-voyager timeline holodeck or ask your own question.

25
How much free will did Picard have during the events of “The Inner Light?”
12
How are holodecks so accurate, when referencing actual events/places?
21
How could the Picard Maneuver confuse sensors from the Warp Era?
26
Why are the holodecks on Voyager in use if they have energy issues?
15
If Shinzon were to replace Picard how is the age difference explained?
15
Could Captain Kirk have lived long enough to meet Picard?
6
How could the Duplicate Voyager crew not know that they were duplicates?
5
Were there ever any plans to have Picard be Wesley's real father?
4
How did the Tachyon pulses converge when they were emitted at totally different times?
18
Where did they get the children's artwork used for Captain Picard Day?