I think I read that a few decades ago borrowed in a public library, a story about a world with floating islands orbiting an axis, not really on a planet.

I think people were flying dragons between those islands. I remember something about geography of the world, or directions given, being described in terms of the orientation with respect to that axis, and the word used (read that in French, probably a translation) was something like "orbitàdroite" or 'orbitàgauche", which would be "on the right of the orbit" or "on the left of the orbit". Any ideas?

It could have been one or a blend of the books in The Death Gate Cycle Series, a 7 or 8 book series written by Margaret Weiss and Tracy Hickman.

The first book Dragon Wing mentions dragons, has one on the cover and the Goodreads summary below mentions airborne kingdoms.

An assassin and the royal child he has been hired to kill form an unlikely and unstable alliance as the plots of human sorcerers, elven pirates, and dwarf revolutionaries threaten to overwhelm the airborne kingdoms of Arianus. 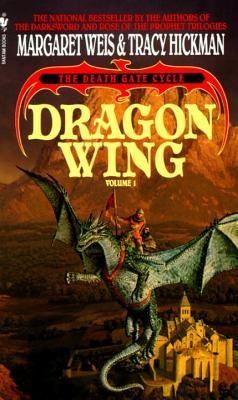 Could it possibly be Michael Reaves The Shattered World published in 1984?

The setting is a number of islands that are the remains of a destroyed planet. Each Island has it's own atmosphere and ecosystem, the atmosphere and orbits are maintained by magicical runes.

They do not travel on dragons per-se BUT there are airships that are made from the skins and bones of dragons, dragons do exist in the world though and one version of the cover does have a dragon on it. 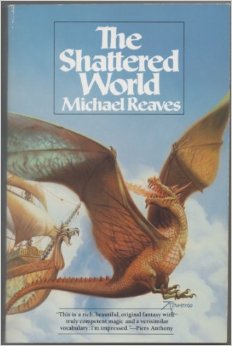 The story follows a shapeshifting thief (called Beorn) and a couple of wizards (Pandrogas and Ardatha) There is an attempt to put the shattered world back together.

It is followed by a sequal called "The Burning Realm" 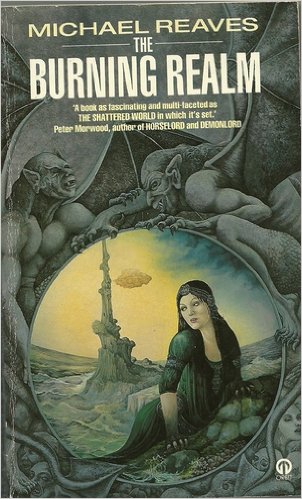 10
Fantasy book series with non-human races and labyrinth
8
Fantasy series where each book takes place on a different world that overly expressed a certain element?

14
Identifying story set in a high-fantasy world implied to be post-apocalyptic
5
Children's book about a dragon who could not breathe fire
17
Story of a wizard boy with 9 lives
6
Book about an engineer who travels into a medieval time/world with magic and gods, becomes part of a magic priesthood
26
Story with an organisation spanning three galaxies
7
Flying wingpacks and floating, spherical houses
7
Children's Fantasy Book involving village of dwarves fighting dragons and tug-of-war