In Star Trek IV: The Voyage Home, how did Kirk and Gillian successfully beam aboard the Klingon ship together?

In Star Trek IV: The Voyage Home, whale biologist Gillian grabs onto Kirk while he is beamed aboard the Klingon Bird of Prey. They both are successfully transported on to the ship, fully intact. In-universe, is this actually possible, or should they have been fused together into one person when their molecules recombined in the transporter room?

We regularly see characters beam up and down while carrying equipment and even organic life forms without getting molecularly fused to them, so the transporter can clearly deal with these situations. Technically, the very scene you're referring to is effectively the proof that this is not a big deal in-universe. We know they wouldn't get fused together simply because they didn't. But I'll answer this as if that scene never happened and we want to know whether it would've been safe based on the rest of canon.

Short answer: In the ENT era this was a very serious risk, and people could die from being fused with other objects caught up in the transportation. But there is strong circumstancial evidence that by the TOS era the technology was safe enough that Gillian and Kirk were probably not in any danger.

In Enterprise, the danger is demonstrated quite clearly by this incident from Strange New World:

(He begins beaming Ethan up.)

REED: There's a problem, sir. There are contaminants in the matter stream. The phase discriminator can't seem to isolate the debris.

(Ethan finally materialises with twigs and leaves stuck on him.) 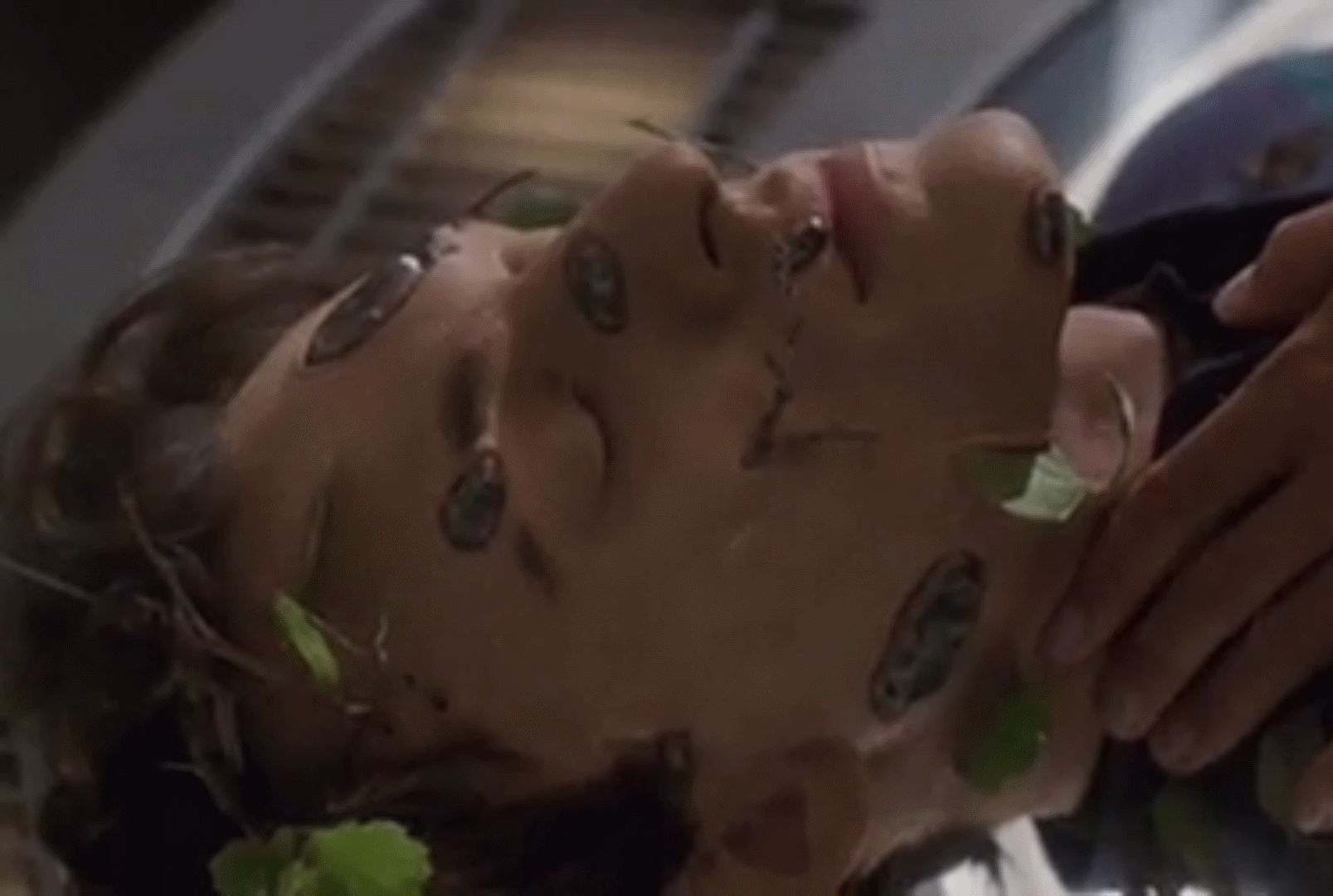 Ethan does survive this, but probably only because these were mere leaves and twigs.

As for TOS, the most useful facts I can gather are: 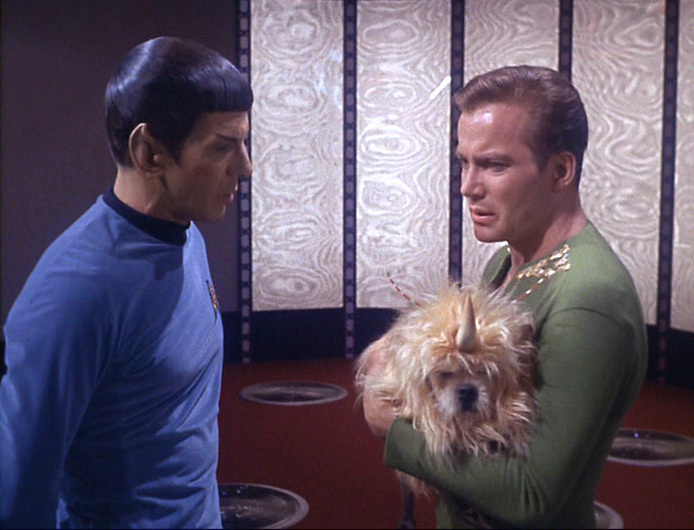 Given all of this, it seems very unlikely that one human grabbing another one mid-transport would be enough to trigger a transporter malfunction that would fuse the two humans together, at least in the 23rd century.

That isn't enough to completely rule out the possibility, since a human is much bigger and more human-like than a blood droplet, and the alien dog was beamed up intentionally while Gillian was not, but I believe that's the strongest case I can make using the movies and TV episodes other than Star Trek IV.

While not directly relevant to the question, there's also evidence that transporters got even safer in later eras.

LAFORGE: We are hypothesising that Doctor Apgar energised the converter at the moment of Commander Riker's beam-out, hoping to make his death look like a transporter accident. But something went wrong. The energy pulse hit the transporter beam and reflected back to the reactor, which caused the explosion.

It's evidently a testament to Mr Scott's great skills with the transporters (or possibly dumb luck) that they weren't both horribly injured during transport. The following exchange appears in the film's official novelisation but not in the film:

NOT KNOWING WHAT would happen, not caring, Gillian flung herself into the beam and grabbed Kirk around the waist. She felt him dissolving in her hands.
She felt herself dissolving.
They reappeared in the transpor ter room. "Surprise!" Gillian said.
Kirk glared at her. "Do you know how dangerous-no, how could you? You could have killed both of us. Never mind. Come on, you'll just have to leave again."

There are two parts to your question:

What wouldn't have happened

First, they would not have been fused. Transporters function on a molecular level, they have to keep atoms separate. The space between two people is gigantic relative to the space between brain neurons. The transporter has to keep those separate.

Depending on what you want to consider canon we know a lot about transporters. At a basic level we know there is a sort of containment beam that must isolate the object being transported. This beam is very important, when it fails, bad things happen.

One could make the argument that the early transporter, as mentioned by another author, (Ent:Strange New World) must not have had this containment beam, thus the "fusion" issue (but this seems like a bit of a stretch without more evidence).

What we do know is that these "containment beams" (or fields) weren't strong enough to stop Danar from escaping the transporter beam in TNG:The Hunted; they are not impenetrable.

The other factor is that the transporter technology, while clearly similar, may not have been exactly the same on the Klingon Bird of Prey -- so we may not be able to rely on our Starfleet technology examples.

Was it possible? Besides the obvious, (yes, because it happened) it seems entirely possible that she would have been able to join the transport before Kirk's pattern had started to be scanned (or the system, or Scotty, restarted the scanning process before the transport initiated).

What would have happened? What we saw.

If there had been a strong confinement beam in place, we certainly could have expected Gillian to bounce off the beam; being unable to enter the transporter stream.

If the imaging scanners hadn't fully scanned her, we certainly could have expected a rather gruesome outcome for her (though not for Kirk who was always in the beam).

If she had delayed till after the matter stream was active, she might have ended up falling on her butt as she grabbed onto someone who was no longer present.

We didn't see any of that, so we must assume that she was able to grab onto Kirk before the matter stream started and that Scotty (or computer) was able to properly compensate to fully scan and transport her.

This example might not easily transfer to Starfleet because it's Klingon technology (though, they're pretty powerful transporters if they're able to beam up two humpback whales... and all that water).

It's all about the timing. We have seen this happen in the TOS episode "The Enterprise Incident" when the Romulan commander jumps on to Spock and is transported with him. There must be a very small window when this is possible. By the time of Next Gen the total transport time is ~5 sechttps://cudebi.files.wordpress.com/2011/06/franchise-star-trek-tng-technical-manual1.pdf so we can infer that in TOS the transport time would be longer and the ACB might allow this kind of thing to happen since we haven't seen this happen in the Next Gen.

Not the answer you're looking for? Browse other questions tagged star-trek star-trek-transporter the-voyage-home or ask your own question.

24
How did Kirk get the whales out?
4
How much volume can a single transporter transport in a single transport?
14
If the Federation has effective time travel, why don't they use it to correct major problems in the past?
13
How much unclaimed space exists in and around Star Trek empires?
18
The ultimate fate and influence of the HMS Bounty
16
At what point and why does it become (almost) impossible to transport through shields in the Star Trek Universe?
2
Abrams' Star Trek shout out to Voyage Home?
24
What happened to Gillian Taylor after she joined Kirk and the whales on the Klingon ship? Wouldn't people be looking for her?
4
What happened to Chekov's confiscated phaser and communicator in Star Trek: The Voyage Home?