In Harry Potter, how old will a wizard live to be on average?

In the Harry Potter series is it clear that magically-inclined individuals (witches/wizards) will live to be considerably older than their Muggle counterparts? From the question Dumbledore's Age, it is given that Dumbledore was roughly 115 years old when he died, and at that age he hardly seemed ready to kick the bucket naturally.

With that in mind, how old will a wizard typically live to be, barring accidents or murder?

Well, Technically, they're supposed to have the same age span.

However, as JKR puts it in this conversation*,

Question: How old is old in the wizarding world, and how old are Professors Dumbledore and McGonagall?

J.K. Rowling: Dumbledore is a hundred and fifty, and Professor McGonagall is a sprightly seventy. Wizards have a much longer life expectancy than Muggles. (Harry hasn't found out about that yet.)

Wizards do have a longer life expectancy than their Muggle counterparts for reasons explained below.

A lot of the things old people die of can be cured at St. Mungo's Hospital for Magical Maladies and Injuries, for wizards.

Note that, wizards have better medical remedies as compared to what muggles use.

Madame Pomfrey, the school nurse, can mend bones in one night, while muggles must wear a cast for months at a time, have months or more of physical therapy and still aren't able to use that broken body part the same way.

If you look at the 15 most common causes of deaths world wide, the only two that can't be cured by some potion or drink are suicide and road accidents.

You're extremely unlikely to die of a road accident if you don't drive, which wizards don't.

So if you can avoid committing suicide, and also if you don't belong to Voldemort's era, you're fairly safe.

As per @ykombinator's explanation, I think life expectancy should be around 100, considering that the human body decays a lot after that age, even when the person has been reasonably healthy.

Note that, even if Dumbledore was "around 150" instead of 115, these numbers are still possible.

To wrap up, a wizard who is over 100 is just old. McGonnagall wasn't young anymore, but she wasn't too old yet. 80 to 90 seems a good number for "average".

In the canonical play Harry Potter and the Cursed Child, we learn that, in 2020 (Albus Potter's fourth year), the trolley witch on the Hogwarts Express has been working in the train for 190 years - she says she was hired as protector of the train (and tasked with preventing students from jumping off it) by Ottaline Gambol, Minister for Magic from 1827 to 1835... If the revelation of her age is played for laughs in the play, it still calls into question the very reason why Voldemort felt compelled to create Horcruxes!

Furthermore, the play shows that McGonagall (born in 1935, 85 at that point) is still Headmistress of Hogwarts, that Madam Pomfrey (who already worked there in 1971, leading a young Lupin to the Whomping Willow) is still the nurse and that Madam Hooch is still the Flying instructor. Although, for instance, Professor Sprout (who, dixit Pottermore, studied at Hogwarts roughly at the same time as McGonagall) has been replaced by Neville in Herbology and there is a Professor Mazoni either for DADA or Charms (in which case he has replaced Flitwick, who was already supervising the Marauders' OWLs in 1976).

As you mentioned, JK's old site's Wizard of the Month feature, Dumbledore was revealed to have been born in 1881 - and we know he was killed in 1997, so at 115-116 years old, at which age he still was able to swim to the grotto containing Voldemort's Locket Horcrux.

On Pottermore, JK writes that Isolt Sayre, the founder of the American Ilvermorny School of Witchcraft and Wizardry, died at 100 years old - in other words, the same age as her Muggle husband... Has magic helped keep him alive that long? Also, by 2020 Petunia Dursley, born before 1960, has died, at a relatively young age for a Muggle woman.

But one could put a caveat here: if wizards like the trolley witch and Dumbledore can live longer than Muggles, it seems they are quite often prone to magical illnesses that can make them die prematurely - like dragon pox, whose victims include: Minister for Magic Eldritch Diggory (at an unknown age), Abraxas Malfoy (whose son Lucius was born in 1954, and who died before 1996), James Potter's "elderly" parents Euphemia and Fleamont (who had him late in life), and the apparently middle-aged parents of Tina and Queenie Goldstein.

Another magical cause of death was also brought up in Cursed Child: Astoria Greengrass (Draco Malfoy's wife) died at 37-38 years old of a "blood malediction" cast on an ancestor of hers.

Of course, if you take into account the two wizarding wars, average wizarding lives become even shorter - Colin Creevey died at 16 years old, Fred Weasley at 20, Lily Evans and James Potter at 21, Tonks at 24-25, and Sirius Black, Remus Lupin and Severus Snape all in their thirties.

I could go out on a limb and say twice that of Muggles. If you look at Marchbanks, the professor that took Dumbledore's OWL, she should be atleast around 20 years older than him, which'll mean 170-175. So 170-200 years shouldn't be impossible.

In Harry Potter and the Philosopher's Stone (the film), There is a wizard named Barry Wee Willie Winkle mentioned in a Daily Prophet Article:

"Barry Wee Willie Winkle celebrates his 755th birthday in style tonight by throwing a huge party for all the wizards and witches he has ever known. 30 million are expected to attend tonight." —"Oldest Wizard is 755", The Daily Prophet, 14 August, 1991 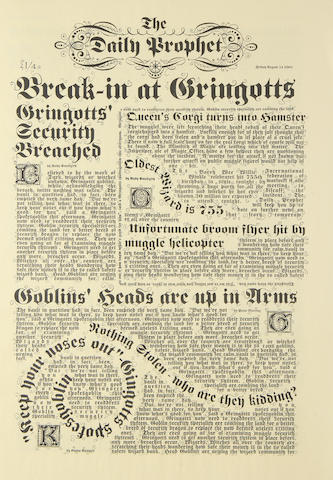 So without a philosopher stone this wizard lived to be 45 years short of 800 and there is no mention of him dying so by the epilogue he could have reached the age of 788. But the Life expectancy is usually around 137 1/2 according their Ministry of Divine Health.

However both of these use the movies as references so it might be non-canon or only semi-canon to the books.

due to a high number of potions, spells, and other magical things a wizard would probably live a little longer. Dumbledore had also co invented the sorcerers stone which and some of it could have had a slight effect on his body.

According to http://harrypotter.wikia.com Armando Dippet (a former Headmaster of Hogwarts) was more than 300 years old when he died. There is also a mention of an ancient age flying test that he was supposed to pass when turning 355 years old. I would say that wizards seem to be aging four times slower than muggles.

I would guess that Wizards with access to good potions are, in effect, biologically immortal, and don't experience the deterioration from old age that we muggles do.

As a result, Wizards only die due to accidents, disease, murder, or suicide.

It wouldn't surprise me in the slightest if, during Voldemort's first rise to power, he specifically targeted old people, to get their political power to pass on to his followers, most or all of whom were his age or younger.

It's also easy to imagine many old wizards who are, or were, fantastic with shield spells, but too infirm to physically dodge well, making them easy victims of the killing curse.

In short, Voldemort and his Death Eaters might have decreased wizardkind's average lifespan noticeably... which makes the question harder to answer.

Also, methuselahs such as Dippet, Flamel, and Winkle might have been statistical outliers, not the norm.

Basically, if you are asking because you want to write a story, pick any number you want, justify it in your head, and make sure your stories details are consistent with your justification.

If you are asking because you are just curious, you're going to have to with the age stated by the Ministry of Divine Health, which was 137¾, at the particular time of publishing of that particular issue of the Daily Prophet... we can only hope that MoDH has good mathematicians, and that the Prophet didn't change the numbers to make things sound better.

2
What is the average lifespan for a wizard?
2
How long can wizards live?
1
Do wizards live longer than most Muggles?
1
What justifies the age of Albus Dumbledore?
75
Why do Hogwarts teachers have such strange names?
37
What age did Dumbledore live to?
26
How do muggles and wizards differ physiologically?
22
Can any magic besides the Sorcerer's Stone or Horcruxes delay death?
2
How could Dumbledore live longer than normal humans without negative effects?
10
What did Prof. Grubbly-Plank do while not teaching?
See more linked questions