I know I've found this one a half dozen times, but I keep misplacing the title. It involves a man locked in solitary confinement, hooded and chained, for crimes of perversion. He escapes, I believe using a guard's hand and eye to get past the biometrics scanners and sets out to discover why he was imprisoned. I remember that he had a transvestite friend that he visited, and when he was visiting his home, he shot an arriving detective with a pistol just pulled from the freezer, then put it back on the tray that the butler had brought it in on.

A group of strange assassins are set after him. I remember there was a scene where a messenger boy brought their summons and was greeted by a man holding up a set of pincers and saying that his teeth would be bad and they would all have to come out. One of the assassins had a bandaged face and wielded a hook at the end of a chain. I remember him being dispatched by having the hook set into the bumper of a bus.

At the end, the main character confronts someone on the top of a train who claims that new technology (implied to be computers) means that they can now simulate an entire world and implies that the protagonist is in that world and, as proof, provides a weather prediction. He gets shot anyhow. The comic ends with the protagonist noting that it was raining right on schedule.

It was published by one of the independent publishers somewhere in the 90s. The title had the character's name, which had an "O" in it. I remember that because for a few years, I confused it with the novel, "O". I want to say "Simon O", but that's not coming up with anything useful on a Google search. I'm pretty sure it was published in four parts.

Sebastian O, written by Grant Morrison, drawn by Steve Yeowell and published by the Vertigo imprint of DC Comics in 1993. 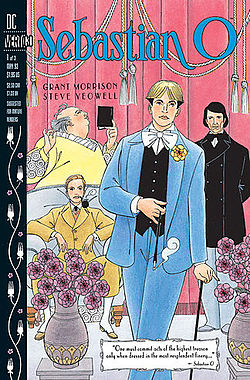 An early example of what became known as steampunk, Sebastian O tells the story of a young flamboyant assassin in an alternate history, technologically advanced Victorian era London and his attempts to track down whoever condemned him to prison for his moral crimes and transgressive literature.

Trained as an assassin, the world-traveling Sebastian belongs to the Club de Paradis Artificiel, which included the lesbian George, the pederast Abbe, and Sebastian's current nemesis, Lord Theo Lavender. While certainly morally unsound (he shoots a police officer in cold blood and has his butler feed it to cats) Sebastian is nonetheless a sympathetic character as he tracks down the whereabouts of Lavender, who betrayed him and had Sebastian locked up in Bedlam for offending Victorian morals.

I was close on the details.