The main character is a (probably teenage) girl who's recently moved with her parents to live on an island (?), or at least a remote region. I seem to remember their move was due to her mother cheating on her father, but this wasn't a big plot point. There were a few chapters consisting of chatroom conversations between her and a friend, in which a mysterious stranger appeared who was visible only to her. His name first appeared as "V", but later changed to "E" after she worked out that his name was Epsilon.

Strange things began to happen on the island, with this girl somehow involved. At one point she went to an abandoned house expecting to find something very significant, and ended up finding ... an old bucket. There were also references to "the Lemon Squire", some sort of secret traditional title; in the end this person turned out to be the local medic. I believe there was a character named Yolanda, but for the life of me I can't remember who she was (definitely not the main character).

Towards the end of the book there's a scene where the main character's loyalties are severely challenged: she has to choose between Epsilon and Yolanda (I think) and isn't sure which side is the "good guys". Eventually she makes the right choice and sides with Epsilon.

This is The Riddles of Epsilon (2005) by Christine Morton-Shaw. It was published by Harper Collins. 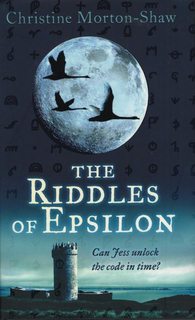 The main character is Jess, who is moved to the island of Lume by her parents.

As you say, Epsilon first appears in a chatroom as "V". Also, Jess finds an abandoned bucket in the novel. It has the name "EPSILON" scratched into its base.

8
Time travel book - Character connected with "Staten"?
6
2000s young adult novel about a girl in a medieval-type time, whose uncle wants to use to access another dimension and summon elementals
14
Looking for a Harry Potter like story with female lead
11
Fantasy book with young female protagonist, magic, matter manipulation, tasteless chocolate sandwiches and room with aquarium walls
5
Manga with a god that sells dreams and a variety of god/animal characters
9
Book with a female main character and a male protector after a nuclear or chemical fallout
5
Book where flying vulcren creatures attack a ship and the female main character needs the antler of a white stag
4
Webcomic with anthropomorphic animals featuring a possible ghost in the library
9
What was the fantasy novel with a fire/fertility goddess named Fala and a sea god named Sur?
11
TV series with a girl who travel to the past with a mirror and meets an exiled Russian prince