Is Pinkie Pie psychic in My Little Pony:Friendship is Magic?

Short answer: apart from her "Pinkie Sense" there is no specific confirmation in the show/comics that she may have some hidden power that would allow her to see the future (the only allusion begin the episode where she dress like a fortune teller).
The "Pinkie Sense" itself it is not fully explained: it gets its name in episode 15 of season 1, but the whole focus of the episode actually was "you can't explain everything, sometimes you just have to believe". The power indeed seem to allow her to sense future events, but it also seem to be a passive knowledge, in the way that she has no actual knowledge of the future but instead she can know what kind of event will happen by recognizing/classifying a specific set of signs (in an interview, one of the member of the show staff actually stated that the general idea behind the Pinkie Sense was to have something. similar to the old belief that people could detect weather changes because of aching bones or the such)

That said, it is pretty clear that the staff behind the show may be playing a little with out adorable pink pony. As a character that draws her power from the so called "Rule of Fun" (if it is funny, I can do it. Possible or impossible doesn't matter) she is naturally constantly hanging on the 4th wall, and as such most of her strange knowledge of things she shouldn't know could be explained by simple jokes the staff wanted to make. Since it would be funny to have Pinkie guess about Twilight identity in EG, that single thing made Pinkie require to do that. In a way, she is not different than Discord, which by definition isn't doing the expected thing most of the times.

Be also aware that this doesn't mean that plot wise the character doesn't know what she can do or that she isn't really meant to be able to do that outside of staff jokes. After all, during the five seasons of the show we got so far, Pinkie has often displayed strange behaviors, to the point that one may wonder if she doesn't have a deeper understanding of some things than what she wants to display. For a quick example often unnoticed, take S02E02. During the brief flashback (time travel?) Discord use to taunt Twily... Pinkie is the only one that can seems to be looking at them for a split second (worth noticing that she don't seem to be looking that way in the original scene, so she is the only one that changes where she is looking in the flashback. Sephiroth, here comes Pinkie). 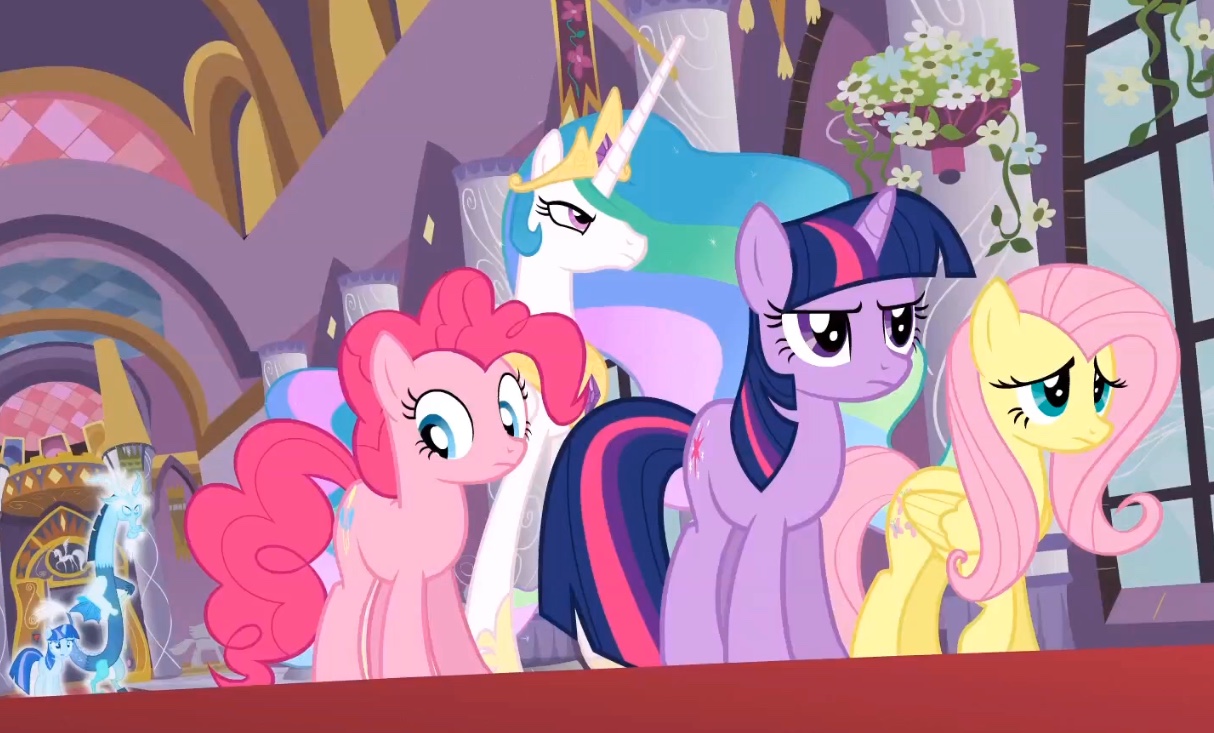 It is also worth noticing one last thing. Given the specific nature of the character, the fact that she basically is Laughter and the fact that she repeatedly crosses the 4th wall, it would be perfectly reasonable for her to know and do what she does because she is the one that controls the authors no less than the authors control her. Call it a reference to the "The fourth wall is not going to protect you" tropes often seen in other shows (random example: the scene in Digimon Adventure when the TV goes blank with a message from the show big bad soon after the same message has been broadcast to all the TV screen in the show world) but Pinkie is also this. Probably this isn't really intended for, and this is even weirder, but the show managed to create a nice loop - the more they need Pinkie to act as Pinkie, the more Pinkie will know the reality behind the wall. To the point she may forget what side of the wall was meant to be the real one.

S01E16 - Sonic Rainboom - not only Pinkie "by chance" finds out the wings spell, but she also manages to have Twily use that one at first, before switching to an easier one. May not look likw much, until you realize that if Twily wouldn't have used the first spell on Rarity, no one would be have been in danger at the end, and this means no Sonic Rainboom.

S01E20 - Green Isn't Your Color: While it can be safely explained with "Rule of funny" and the fixation Pinkie has with promises, one could argue that if she didn't bugged Twily to stay quiet, Rarity and 'Shy wouldn't have learned the same lesson. The need to face the problem was what made them face their felling and for a second grasp the first rule they forget every single episode: if you have a problem, talk to your friends.

S01E21 - Over a Barrel: Pinkie Pie song is more spot on than what is initially given credit - after all, even Twily quotes the "You have got to share" line at the ending. What is really interesting is that the song also explicitly says "Both our diets, I should mention Are completely vegetarian", which sound weird since the episode ends with an agreement based on some apple pies. Also worth to notice that the buffaloes were going to stop (something that would have given a bad moral, with the "cow-boy" side winning over an hopeless group of "American natives") - that is, if Pinkie didn't sing that song again. And... who did actually throw that last pie? No one knows.

S01E23 - The Cutie Mark Chronicles: Right after Scoots argues that they never seem to be able to find Dashie when they want to, Pinkie materializes on the moving scooter. "You're looking for Rainbow Dash? If I was her, I'd be at Sugarcube Corner." - Guess where they find her? Even better is the line after: "Of course, if I was anyone, I'd be at Sugarcube Corner."... and yeo, all the mane six are magically there. Even Twily, the one that we left just before the CMC meet Pinkie and technically no one would have had the time to invite.

S01E26 - The Best Night Ever: The Pony Pokey song basically has Pinkie describe what the other mane six are doing... in real time.

Bonus: Equestria Girl annual comic 2013: we get to see how the human mane ...five became friends. And we discover that while the Wondercolts tails and ear sets were made by Rarity.. the one that had the idea was Pinkie. Does now it seem a little weirder that she overestimated the needed number so much that they would have still plenty of them to distribute probably a whole year later in a certain cafeteria?

**Bonus #2: Equestria Girl shorts (have to check the title): this isn't really related to psychic powers or the such, but it is related to the knowledge human Pinkie displays of their pony counterpart. During the clip we can see Pinkie riding in a Merry-go-round. The pony she is ridding... is actually a toy version of her pony self. Also, in the same episode, you can see Twily and Fluttershy with a Discord plush, but this could actually plausibly be a present that Equestria Twily gave Fluttershy in the first place.

My friend told me she saw a video that explained why the human Pinkie Pie knew everything about the ponie world, both of them changed places. If I remember the name of the video i'll wright it here.

The video is the blooper reel for Equestria Girls: Friendship Games 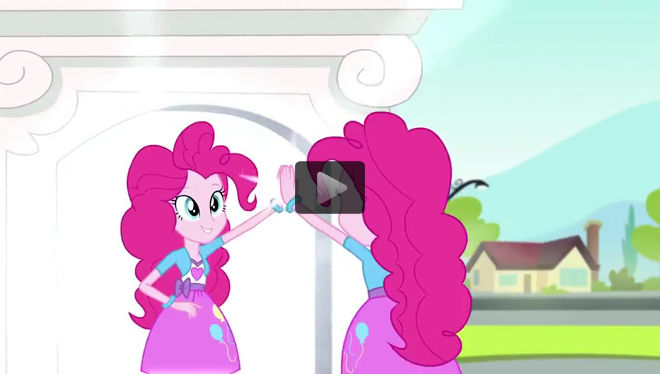 It is at the end

Not the answer you're looking for? Browse other questions tagged my-little-pony my-little-pony-fim psychic or ask your own question.

30
What is the relative scale of the My Little Pony universe?