Why did the Empire not put their Stormtroopers in camouflage when they were stationed on Endor?

Playing the Star Wars: Battlefront game, there is a level set on the forest moon of Endor. On this map, the Rebel forces have a massive advantage: they are wearing camouflage. Used correctly, this can introduce a huge imbalance to all engagements on this map. This got me to thinking. When Imperial Stormtroopers are first introduced in A New Hope, they are in a Marine-type role, being the first to board a ship against an opposing force and fighting their way to the bridge. The white with black highlights armor makes sense there. And it works fine in the next major engagement we see them in, on the ice planet Hoth. But when it comes to the Battle of Endor, it's apparent that they've been stationed there with at least Legion strength, long enough to establish a major garrison.

Why did no one in command requisition some form of camouflage uniforms? Is there an in-universe answer for this, or even a rational explanation? Maybe they thought they would never be challenged there, so why bother?

First of all, clone troopers from the Grand Army of the Republic made extensive use of camouflage. 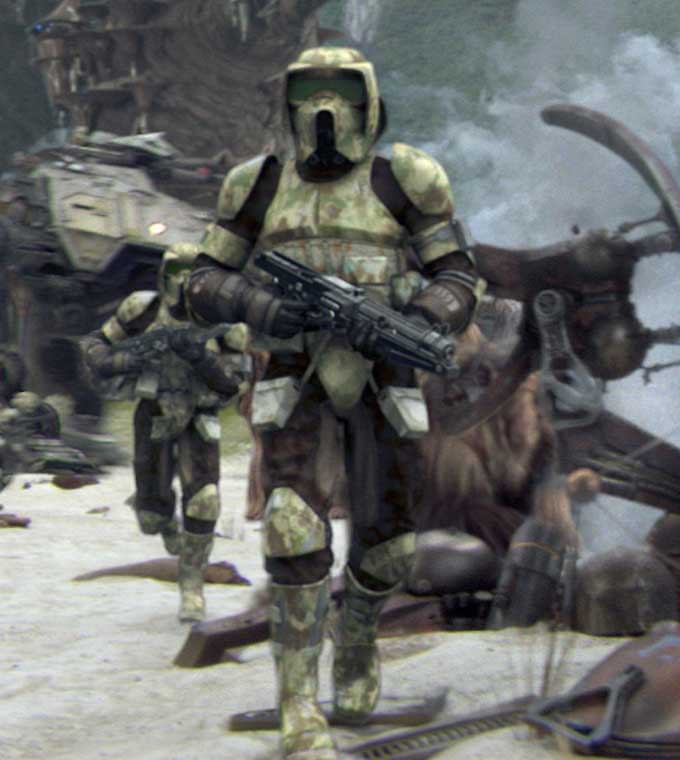 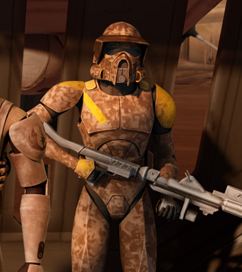 After the rise of the Empire, though, camouflage is abandoned in all circumstances in favour of the white bucket:

^ This, even though the Imperials were clearly expecting a Rebel attack and were setting up an ambush - an offensive operation where stealth is paramount.

Clearly, the abandonment of camouflage is deliberate.

Don't forget, to the Empire the (Clone) war is over. They are the rulers of the galaxy, and all that is left to do is to crush what little Rebel scum remain - especially after Hoth, when the Alliance is considered by the Empire to be on its last legs. To Palpatine, Endor was a clean-up action as well as the final attempt to turn Luke and replace Vader. Overconfidence? Perhaps. But would any rational commander think primitive natives have any tactical worth?

Also, the Galactic Empire rules through fear - this is the key reason. The Imperial Stormtroopers are representative icons of the Empire's oppression. Stormtroopers are meant to stand out in plain sight, not hide under cover. They are supposed to make Rebel scum piss themselves thinking "omg the Empire is coming!" not "it's the Empire! Where did they come from?" Stormtroopers serve mainly to police, not to conquer. Their duty is to maintain an empire, rather than building one.

Also, my own conjecture, but perhaps in blaster warfare invisible sensor camouflage paint may be more important than visual camouflage?

The Emperor was overconfident. They were at worst expecting a shuttle full of Rebels against an entire legion of their finest troops.

The Ewoks were not considered a threat.

So camouflage should not have been needed. It could have even warned the Rebels that they were expected.

Battles like in "Battlefront" were not part of the Emperor's plan. He didn't foresee that.

Not the answer you're looking for? Browse other questions tagged star-wars warfare or ask your own question.