Are the “wood between worlds” and Aslan's Country related in some way?

In The Magician's Nephew we read that movement between worlds can be accomplished by traveling with magic rings to a "wood between worlds" that contains pools acting as gateways.

My question is: how does this wood relate to other aspects of the Narnia series, in particular Aslan's Country? As we know, Aslan's Country is supposed to be heaven, but also seems to interconnect/be above all other worlds in C.S. Lewis's "multiverse".

I find somewhat of a disconnect when trying to combine the two concepts, such as why would the "wood between worlds" even be in existence if traveling through Aslan's Country can do the same thing? Does Aslan use it for transport himself?

So is it really a separate entity entirely? Can we order such realms in a hierarchy such as:

I know there are no definite answers and sadly we can't ask the author anymore, but it would be nice to throw around some ideas!

Each world (Narnia, Charn, our own world, and so on) has an associated "realm beyond", where people go when they die. Narnia's version is called Aslan's country, the version associated to our own world is called Heaven, and so on. For each world, this appears very much like a better and more wonderful version of the land of the living. They call Aslan's country "the real Narnia", and similarly they see a "real England":

[...] And far out to sea she could discover the islands, island after island to the end of the world, and, beyond the end, the huge mountain which they had called Aslan's country. But now she saw that it was part of a great chain of mountains which ringed round the whole world. In front of her it seemed to come quite close. Then she looked to her left and saw what she took to be a great bank of brightly-coloured cloud, cut off from them by a gap. But she looked harder and saw that it was not a cloud at all but a real land. [...]

"Why!" exclaimed Peter. "It's England. And that's the house itself—Professor Kirk's old home in the country where all our adventures began!"

"I thought that house had been destroyed," said Edmund.

"So it was," said the Faun. "But you are now looking at the England within England, the real England just as this is the real Narnia. And in that inner England no good thing is destroyed."

These realms can be thought of as above the lands of the living - or within, if you prefer - but either way, they are not accessible in any way other than by dying.

The versions of heaven associated with different worlds are separate from each other, yet more closely interconnected than the worlds below. Travelling between them is easy:

Suddenly they shifted their eyes to another spot, and then Peter and Edmund and Lucy gasped with amazement and shouted out and began waving: for there they saw their own father and mother, waving back at them across the great, deep valley. It was like when you see people waving at you from the deck of a big ship when you are waiting on the quay to meet them.

"That is easy," said Mr. Tumnus. "That country and this country—all the real countries—are only spurs jutting out from the great mountains of Aslan. We have only to walk along the ridge, upward and inward, till it joins on. And listen! There is King Frank's horn: we must all go up."

By comparison, as we know, travel between the worlds themselves rather than their "higher realms" is not easy, and

can only be done by Magic

One way of getting between our own world, Narnia, Charn, and so on is via the Wood between the Worlds, which acts as an inter-world meeting place - a transport hub, if you will. But of course it's not the only way: throughout the series we see the main characters go back and forth between worlds in several different ways, usually at Aslan's bidding. What makes the Wood between the Worlds special is that people can move between worlds of their own accord (provided they have rings), and choose which worlds to go to, rather than having to wait to be "summoned" by Aslan/Jesus/etc.

This map of CS Lewis's multiverse might make the situation a little clearer: 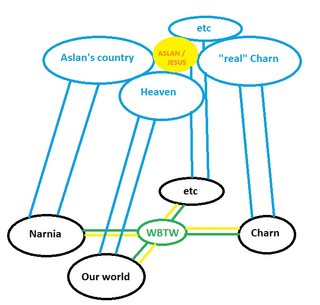 Transport between the lower realms is possible using the green and yellow rings (or, at least between Narnia and our world, simply by the will of Aslan - wardrobes, paintings, horns, doorways, and so on). The upper realms are all connected via "the great mountains of Aslan". Transport from the lower realms to the upper can only be achieved by dying.

I don't think it does relate to Aslan's country. It's been awhile, but, as I recall, the series' first recorded adventure into Aslan's country (not counting Reepicheep, whose journey there was not recounted beyond his entry) was taken by Jill in The Silver Chair at the very beginning of the book. She did also find herself in a wood, but it was not a still and silent type like Digory's, instead there were riotous, musical birds. There were no pools, but a single stream from which she was almost too frightened to drink. And there was Aslan.

Not the answer you're looking for? Browse other questions tagged the-chronicles-of-narnia cs-lewis or ask your own question.

158
In-universe, is Aslan actually Jesus?
41
What does Aslan mean about being a bridge builder in our world?

20
What is the relationship between Fillory and Narnia?
9
What was the difference between That Hideous Strength and The Tortured Planet?
7
Is there any connection between Narnia and the “Narn” in Narn i Chîn Húrin?
15
If two humans enter Narnia through the Wardrobe with 10 years between them and come back to our world together, at what point in time do they arrive?
38
What are the differences between Adult and Kid versions of The Chronicles of Narnia?
4
What is the time difference between Prince Caspian and The Dawn Treader?
41
What does Aslan mean about being a bridge builder in our world?
7
What happened to the humans in Narnia between the reigns of King Frank and Queen Helen, and that of Jadis?
24
Do non-speaking animals in Narnia have souls?
37
How did Jadis, The White Witch, obtain the right to kill a traitor in Narnia?