From the bridge why can you see another ship in space, shouldn't there be no light?

Sorry if this has been asked before but I searched and was unable to locate an answer. Something that has always bothered me is in Star Trek whenever the Enterprise comes upon another ship in deep space. When we see the ship, either on the view screen or from a shot outside the ship, the ship always seems to be illuminated. I can see how there would be illumination in a solar system, near a star, etc... but in deep space wouldn't it be dark as the only light is coming from stars that are very far away. How would a ship look to another ship in deep space where there is not much light?

Nearby stars are shining on the ships from off screen in addition to the ship's built-in lighting.

From the Star Trek: Voyager episode The Void:

USS Voyager is sucked into an area of space that is devoid of stars, planets or any other form of energy.

Because this place is devoid of stars, planets, and other forms of energy, there are no light sources other than the ships themselves. As Praxis pointed out in his answer, the ships do have plenty of lights that make them visible in the usual, relative darkness of space.

Voyager is visible, even without any outside light sources whatsoever, because of the built-in lighting shining on the hull of the ship. 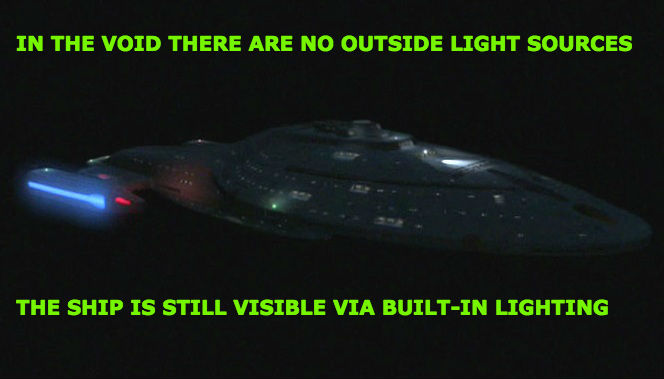 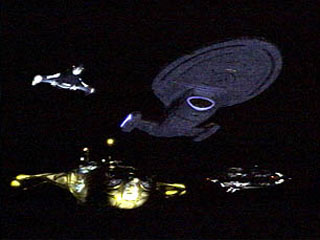 You'll notice that, while still visible, the ships in the void are noticeably harder to make out due to the lack of other light sources. This seems to indicate that the reason we can usually see ships in normal space so much more clearly is that they are also being lit by relatively nearby stars or other light sources (even if these light sources are not shown) in addition to their built-in lighting. 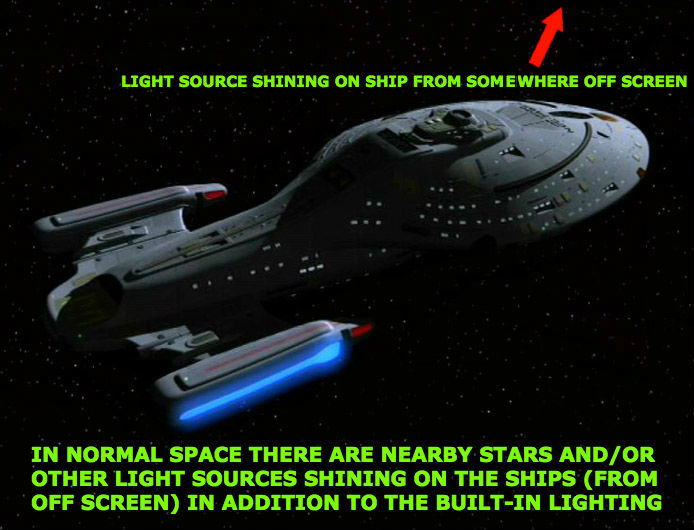 The in-universe explanation is that nearby stars and such are shining on the ships from off screen in addition to any built-in lighting.

The out-of-universe explanation is that those making the show want to ensure that the audience can clearly see the ships, as not seeing them clearly would have less entertainment value.

Starships have plenty of lights on them.

Your question ignores the fact that starships have their own lights on the exteriors of their hulls. In the images above and below (from The Motion Picture) you can see quite the contrast between dark and lit-up parts of the hull. 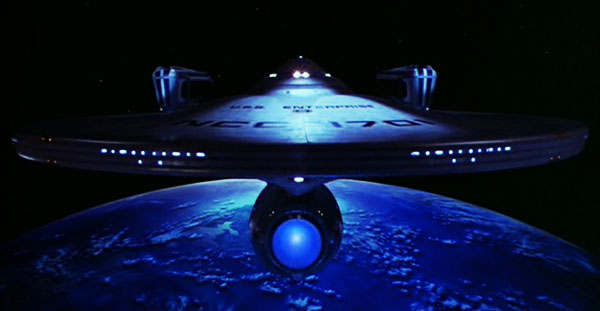 I would say that these images also answer your question of "How would a ship look to another ship in deep space where there is not much light?"

An out-of-universe answer would be that the people watching the show need to be able to see the ship that the Enterprise has encountered.

As for in-universe: the view screen could probably create a image of the ship they have come across from the sensor information.

There is a rumour that it isn't actually real! "Enhanced ambient light" does not fly - there is nothing for light to reflect off and scatter, nor an atmosphere to diffuse it - all light in space is directional. The portrayals typically use strong directional sources, but with diffused shadow boundaries - because they look appealing, but as noted this is also wrong. Shadow edges would be sharp, except where there are adjacent objects to bounce light back into the shadow areas .

My bigger issue is not the above.It is that in space, where there is no up and down, every ship is precisely the 'same way up' as the Enterprise!

In addition to (or elaboration of) @RedCaio's answer, remember that planets also reflect starlight and shine on ships - just as the moon lights up our nights here on Earth.

Not the answer you're looking for? Browse other questions tagged star-trek physics or ask your own question.

195
Was the Millennium Falcon too slow?
47
Why do Star Trek vessels always approach each other on parallel planes?
9
Are there Easter eggs in the opening credits of the remastered original series?
17
Why can you never see other part of the ship through the windows on the Enterprise-D?
14
How did Starfleet have an admiralty if it didn't have a fleet?
12
Did we ever see the captain's yacht?
13
Has there ever been a warp / non-warp collision?
19
Are there any designs for Sulu's rising targeting scanner prop from Star Trek: The Original Series?
33
Why don't we see the Milky Way out the windows in Star Trek?