What does it take to be expelled from Hogwarts?

The only person we know who was expelled from Hogwarts was Hagrid and his transgression was quite big:

He allegedly did open the Chamber of Secrets

Harry was threatened several times to be expelled but it never came to that, even when he broke the rules for not doing magic during summer vacation time.

So - what does it take to get expelled?

Background of the question:

Actually being expelled from Hogwarts is quite the disaster for a wizard/witch. The ability to use magic is comparable to the ability to read/write for Muggles - a very core skill that is needed for practically any profession in the magical world.

A Muggle who is expelled from school could just join another school and finish his/her education. Expulsion from Hogwarts results in your wand being broken and you are forbidden to do magic for the rest of your life.

Students can be expelled if they

Under Dolores Umbridge’s tenure, several extra activities were added to this list:

The expelled student’s wand is confiscated until their guilt is proven. Once it is, the wand is destroyed. 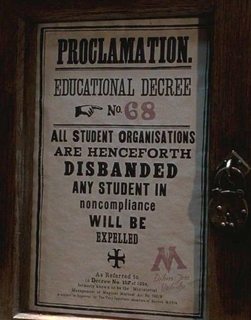 “Dear Mr Potter, We have received intelligence that a Hover Charm was used at your place of residence this evening at twelve minutes past nine.

As you know, underage wizards are not permitted to perform spells outside school, and further spellwork on your part may lead to expulsion from said school (Decree for the Reasonable Restriction of Underage sorcery, 1875, Paragraph C).

We would also ask you to remember that any magical activity which risks notice by members of the non-magical community (Muggles) is a serious offence, under section 13 of the International Confederation of Warlocks’ Statute of Secrecy.”
- Harry Potter and the Chamber of Secrets, Chapter 2 (Dobby’s Warning)

Breaking this rule too many times is likely to result in expulsion.

Leading another student to a werewolf.

Snape tells Harry that if James Potter and his friends were successful in their prank, they would have been expelled.

“Then let me correct you – your saintly father and his friends played a highly amusing joke on me that would have resulted in my death if your father hadn’t got cold feet at the last moment. There was nothing brave about what he did. He was saving his own skin as much as mine. Had their joke succeeded, he would have been expelled from Hogwarts.”
- Harry Potter and the Prisoner of Azkaban, Chapter 14 (Snape’s Grudge)

The prank he referred to was leading him to where Lupin was in werewolf form at the time.

Though Hagrid was innocent, the reason for his expulsion was that he was thought to have caused the death of another student with a creature he kept in Hogwarts.

‘It’s all over,’ he said. ‘I’m going to have to turn you in, Rubeus. They’re talking about closing Hogwarts if the attacks don’t stop.’

‘I don’t think you meant to kill anyone. But monsters don’t make good pets. I suppose you just let it out for exercise and –’

‘It never killed no one!’ said the large boy, backing against the closed door. From behind him, Harry could hear a funny rustling and clicking.”
- Harry Potter and the Chamber of Secrets, Chapter 13 (The Very Secret Diary)

OFFENCE: Illegal possession of a magical beast causing endangerment of human life and violation of Animal Welfare Laws 101/304.
-The Case of Beasts: Explore the Film Wizardry of Fantastic Beasts and Where to Find Them

Though Newt was found to be innocent, presumably someone actually guilty of this would be expelled.

NOTES: Proposed expulsion from Hogwarts School of Witchcraft and Wizardry due to the illegal possession of a magical beast causing endangerment of human life and violation of animal welfare laws 101/304.

Punishment: Expulsion from Hogwarts School of Witchcraft and Wizardry.

– The Ministry of Magic Animal Welfare Department were also informed of the violation and required to rehouse the magical creature.
-The Case of Beasts: Explore the Film Wizardry of Fantastic Beasts and Where to Find Them

The reason Newt was not expelled was because he was found innocent, not because the crime was not severe enough.

38
In canon, has anyone other than Hagrid been expelled?
22
How did Newt graduate from Hogwarts if he got expelled?
19
Students expelled from Hogwarts, breaking of wands, and complete education
6
Can doing magic in front of a Muggle get you expelled or not?

17
Why Was Hagrid's Wand Snapped?
33
What house was Hagrid in before being expelled?
19
Students expelled from Hogwarts, breaking of wands, and complete education
5
Who expelled Hagrid?
22
How did Newt graduate from Hogwarts if he got expelled?
25
Why are Hogwarts students threatened with expulsion so much?
27
Was Hagrid ever compensated for his wrongful expulsion?
11
Is there wizarding education for adults?
15
Why wasn't Newt Scamander's wand snapped when he was expelled from Hogwarts?