How did Hagrid's wand find him?

In both movies and the books, it was stated more than once that wands choose wizards. The thing I don't understand is Hagrid's wand. 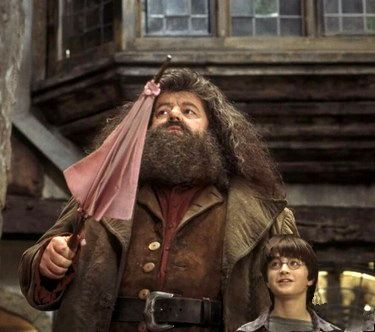 It is known that only wizards can carry wands. Wand makers produce the wands in several different sizes, but only for average-sized wizards (and maybe some short and tall ones). Hagrid is half-giant, beyond being tall and he is clearly a very big wizard.

If the pink umbrella's staff is not an entire wand but an equipment to fix the wand in it, so Hagrid can use it like a want but not like a toothpick, how did the wand maker decide to make this big of a wand if he didn't think Hagrid would buy it?

TL;DR - There is nothing overtly special about Hagrid's wand. He would have bought at Ollivander's shop just as any witch or wizard would.

Most wands will be in the range of between nine and fourteen inches. While I have sold extremely short wands (eight inches and under) and very long wands (over fifteen inches), these are exceptionally rare. In the latter case, a physical peculiarity demanded the excessive wand length.

So, a special wand may be made if required for a wizard of abnormal proportions.

The wand of Rubeus Hagrid is 16" long, and made of oak wood; the core material is unknown. This wand is the longest ever recorded, except for Lucius Malfoy's wand, which measured 18" in length. The wand is described as "rather bendy". This wand was snapped when Hagrid was expelled from Hogwarts School of Witchcraft and Wizardry in his third year, and either repaired or replaced at some point prior to his picking up Harry at his eleventh birthday. The wand was presumably concealed inside an umbrella.

Here we see that Hagrid's wand was longer than normal but not excessive. There is no reason to believe that Ollivander would not have had the wand in stock.

We do see here that JK Rowling is stating one of longest wands was 15" but that Hagrid's was 16" and Lucius' was 18"... the HP Wiki is not 100% accurate is not a source for canon on this site. Even still, the canon quote implys the Ollivander will make a custom wand if needed.

3) Wands used to be custom made from the JK Rowling writing on Mr. Ollivander (canon):

Prior to Mr Ollivander's proprietorship of the family business, wizards used a wide variety of wand cores. A customer would often present the wandmaker with a magical substance to which they were attached, or had inherited, or by which their family swore (hinted at by the core of Fleur Delacour's wand). Mr Ollivander, however, was a purist who insisted that the best wands would never be produced merely by encasing the whiskers of a favourite Kneazle (or the stalk of a Dittany plant that once saved a wizard's father from poisoning, or the mane of a kelpie a witch had once met on holiday in Scotland) in the customer's favourite wood. The best wands, he believed, had cores of immensely powerful magical substances, which were expertly enclosed in specially selected and complementary wandwoods, the result to be matched to an owner with whom the wand itself felt the most affinity. While there was initially substantial resistance to this revolutionary way of crafting wands, it swiftly became clear that Ollivander wands were infinitely superior to anything that had come before. His methods of locating wand woods and core substances marrying them together and matching them to ideal owners are all jealously guarded secrets that were coveted by rival wandmakers.

Here we see wizards can bring their own materials to have a wand made if all else fails.

In the first book (here taken from the American version, Harry Potter and the Sorcerer's Stone), Ollivander describes Hagrid's wand.

"Rubeus! Rubeus Hagrid! How nice to see you again.... Oak, sixteen inches, rather bendy, wasn't it?"
"It was, sir, yes," said Hagrid.
"Good wand, that one. But I supposed they snapped it in half when you got expelled?" said Mr. Ollivander, suddenly stern.
"Er — yes, they did, yes," said Hagrid, shuffling his feet. "I've still got the pieces, though," he added brightly.
"But you don't use them?" said Mr. Ollivander sharply.
"Oh, no, sir," said Hagrid quickly. Harry noticed he gripped his pink umbrella very tightly as he spoke.

Hagrid's wand was not especially large. On the same page, Voldemort's wand is described as "thirteen-and-a-half inches" - Hagrid's wand was only two and a half inches longer. While most wands described in the books are less than a foot long, slightly longer wands are not wholly uncommon. On the higher end, the HP wiki states that the Elder Wand was fifteen inches long, and that the wand concealed in Lucius Malfoy's cane was eighteen inches long, but I can't confirm either of these pieces of information from canonical sources so far.

Hagrid's wand was certainly not large enough to be made into the staff of his umbrella - stick umbrellas are generally much longer than that, in the vicinity of three feet. (For instance, venerable British upper-class umbrella maker Swaine Adeney Brigg makes men's and women's wooden-shafted umbrellas in lengths from 33 to 38.5 inches.) Also, the wand is clearly not integrated into the umbrella in a visible way - Ollivander doesn't recognize it, and the only indication of anything unusual about the umbrella is the way Hagrid protectively clutches it when his wand is mentioned. The broken wand is most likely inside the shaft of the umbrella.

From this I think we can conclude that Hagrid had an ordinary wand. It was longer than most, but not umbrella-sized, and probably not outside the range of sizes that Ollivander and other wandmakers are accustomed to. It may have chosen Hagrid because he was well-suited to a long wand, but it was probably not custom-made for a person of his stature.

17
How Big is Hagrid?
23
What are the differences between old Pottermore and new?

41
Why did Hagrid's umbrella work for him?
46
As Part Veela, Why Could Fleur Delacour Use Polyjuice Potion to Transform into Harry, and Why Could Hagrid Not?
32
What objects can be used as wand substitutes?
17
Why Was Hagrid's Wand Snapped?
50
What is the Economic system of the Potterverse?
16
Students expelled from Hogwarts, breaking of wands, and complete education
2
Did Dumbledore mend Hagrid's wand with the Elder Wand?
9
Was Hagrid's hut built specifically for him?
6
Why is Lucius Malfoy's Wand so Long?