Why isn't The Flash unstoppable?

I've recently gotten into The Flash TV show, and so I've been reading about his powers.

What I don't understand is why his typical rogues pose a threat - it seems like there should be very little limit to his powers.

I haven't read enough of the old comics so I don't the know challenges he's had. For a guy who can't be attacked, can time-travel and can race around the globe several times in a minute, I can't imagine there is much that could pose a threat.

I covered part of this in my answer regarding "How does the Flash perceive time?" In the treatment I discuss that the nature of the Flash's powers are based around his ability to perceive, analyze and counter the attacks of his enemies.

Despite their silly names and often less than stellar outfits, the Flash's Rogues Gallery are not to be taken lightly, especially when they are working in concert. The bulk of the Flash's Rogues Gallery use weapons, techniques, or abilities that attempt to confound, distort, or alter the physical properties of the world around the Flash in an effort to prevent him from maximizing the use of his powers.

Boomerang, Mirror Master and Trickster use misdirection, physical distractions or optical illusions to keep the Flash from being able to perceive attacks until they are too late to be avoided.

The Weather Wizard, Mr. Element, Captain Cold and Heatwave use physical environmental attacks that alter the battlefield or can affect the Flash directly using heat, cold or electricity.

Professor Zoom, Savitar and to a lesser extent, the Top were able to compete with the Flash directly using powers similar to the Flash himself. 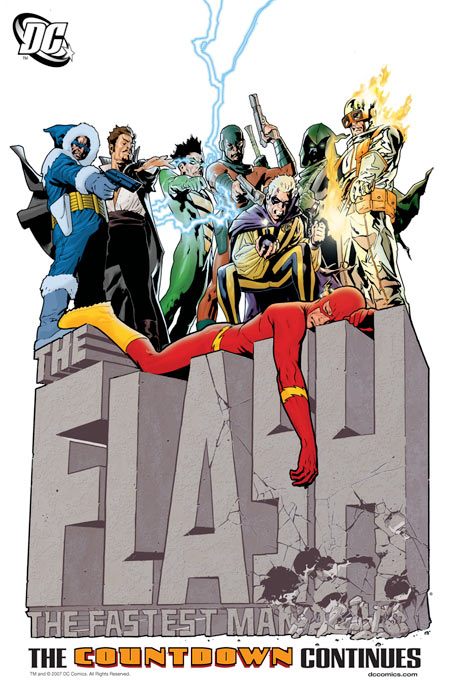 The Flash is not completely invulnerable to injury even when agitating his molecular structure while under attack. Most normal physical attacks will not harm him, but many of the specialized attacks of his Rogue's Gallery may be able to damage him incrementally. The other issue in using intangibility is the inability to hit his opponents.

As far as time-travel is concerned, his ability to affect a circumstance once he has been involved in the event is limited and would likely cause a temporal paradox as he could not be in the same place at the same time, even though his powers allow him to alter many of the laws of physics, he tries to avoid creating paradoxes since their effects on the time stream can be unpredictable.

Is the Flash formidable? Absolutely. But the Rogues are a very unusual group of villains because they are pretty exclusive in their efforts to both coordinate and cooperate in their fight/grudge against the Flash. Their hatred was so great once they even transcended death to return to plague the Flash; that kind of hatred is an advantage no matter how fast your opponent is.

Thaddeus's answer is, by far, the most important one here.

Two more things that I wanted to point out, though:

The Flash's powers are almost universally deliberate actions. Unlike Superman, who is bulletproof even when he's having a quiet dinner as Clark Kent, the Flash has to BECOME intangible, or CHOOSE to travel through time, etc. It's something he has to realize is necessary, and then he has to actually activate the power. His reflexes and accelerated healing are (almost) always "on," but everything else is an action he must begin, not a standing truth about him at all times. That means that a potential exists for them to be nullified or prevented.

Because of this, as Thaddeus so eloquently said, many of Flash's foes focus on confusion, misdirection, ambush, unpredictability, or other factors that limit the Flash's ability to USE his powers. Batman's enemies often seem to think that they can actually beat him outright, but the Rogues (at least the non-speedsters) almost never try to beat the Flash through superior speed or force. Instead, they try to keep him off-balance enough that he can't make full use of his abilities.

And secondly, many of Flash's powers are often shown to be difficult, exhausting, or dangerous to use. He can travel in time, sure, as long as he doesn't mind risking an unexpected change that could ruin the whole universe (like in Flashpoint/Flashpoint Paradox). Becoming intangible is often shown to require a moment of preparation and a "deep breath" before he starts, as though maintaining that vibration isn't as easy as, say, Martian Manhunter's effortless intangibility. (Some Flashes don't even have the ability to vibrate into intangibility, it's so difficult.) His predictive abilities are nice, but in many versions they require him to recognize that something needs to be predicted: they often aren't like Peter Parker's spider-sense, which goes off even if he thinks nothing is wrong. And oftentimes, the upper-limit of his abilities can damage even him: on numerous occasions the Flash has moved so fast he's almost merged with the Speed Force and died, or aged himself to the brink of death, etc.

Therefore, while the Flash is an incredibly potent superhero, the Rogues have learned to take advantage of his weaknesses and the Flash himself has to be careful not to over-do it with his own powers.

The Flash, like everyone else has weak spots. Whether it is mentally or physically. Savitar had an opening in his suit where he was vulnerable. Barry's weak spots is usually family, or friends, or any spots where he could be attacked.

Not the answer you're looking for? Browse other questions tagged dc the-flash the-new-52 or ask your own question.

5
Why is the Flash always so slow in key moments?
4
Why does Flash (2014) not simply disarm or knock out his opponents in the moment he arrives?
2
Why doesn't Flash kill OR knock out OR tie up faster (in seconds)?
42
How does the Flash perceive time?
18
What is the best scientific explanation for how The Flash moves so fast without issue, or is it just "magic?"
14
Does Flash age slower because of his ability to run at relativistic speed?

42
How does the Flash perceive time?
28
Can the Flash run faster than light?
20
Can the Flash see the future now?
10
What actually happened when the flash got shot?
13
Why doesn't Alan Scott's Green Lantern ring work on wood or plant material?
32
How many people have deduced Batman's secret identity?
2
In DC (Flash), is there any comic version of Iris West Allen which isn't Caucasian?
16
Can the Flash run backwards?
19
Is the Flash always fast?