Why would the other Xindi species give a race of fish-people equal standing?

On Star Trek: Enterprise, 1 of the 5 races of Xindi on the Xindi council are fish-people (for lack of a better term).

I am having trouble understanding how a race of under-water non-humanoids could be on equal standing with the others.

Power usually comes from the possession of military and/or economic might. Given that the fish-people live underwater, it seems unlikely that they could've ever developed any sort of laser, nuclear, or other hot fusion weapons or technology. Probably not a whole lot of space technology is getting developed there either. Not to mention that being underwater would seem to put them at a distinct disadvantage for developing banking systems, trade with the other species, etc.

There is nothing in canon or extended canon to address this. One might speculate that, with unique access to the resources of Xindus's waterways, the Xindi-Aquatics were able to trade with the other Xindi for resources and knowledge that they could not initially produce for themselves.

Indeed, as we see that the Aquatic military strength rivaled even the Xindi-Reptilians and Insectoids, one might surmise that this trade was very successful, and allowed the Aquatics to overcome the disadvantages of their native environment.

The Xindi-Aquatic ships were the most powerful and largest of the Xindi races, but compared to Primate and Insectoid ships, they were among the slowest and least maneuverable.

The largest of their cruisers resembled huge Terran manta rays and were large enough to comfortably accommodate an NX-class vessel in its aft cargo hold. They were extremely powerful in comparison to those of other Xindi, destroying several Reptilian and Insectoid ships with ease at the final battle against the Xindi superweapon. It was only because of the immense anomaly field that they were disabled. 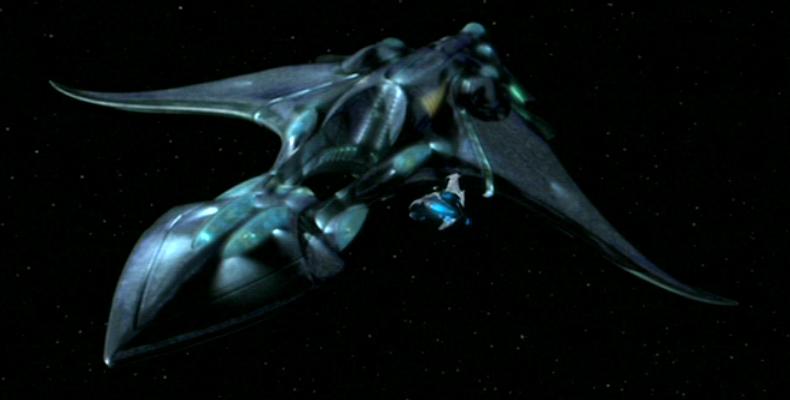 The Xindi are known to have had conflicts among themselves, canon proof for that is their civil war. So the recognition of Aquatics as equals does not have to have been reached by peaceful means alone.

Before their space age, and probably also during the beginning of it, the Xindi were most likely bound to ground, air and sea transport of goods and people and access to these areas for resources, just like us humans are now. Now, the Aquatic control the sea, and they should be able to deny the other species' use of it if they want to - they have the advantage by being able to attack from below the surface. Think of the power submarines projected before useful countermeasures were developed on earth.

This might be enough to get them to the negotiation table (or negotiation pool?) in a more peaceful universe.

For the mirror universe, I like to imagine an all-out submarine war as the Aquatics' rise to power, and them being locked into a cold war with the Reptilians who conquered the surface.

For some other example of aquatic species influencing surface dwellers pretty severely see John Wyndham's "The Kraken Wakes" (granted, the aliens import their tech when arriving) or Frank Schätzing's "The Swarm" (tech? why do you need tech when you can command all of the marine wildlife?).

This is just a guess, but being aquatic would have several advantages on a planet where there were several dominant species competing. They would likely be the most removed from the conflicts between the Xindi species, and would have little competition for resources and space. While the other Xindi were fighting wars amongst themselves, the aquatics would be left to develop without set backs. Their aquatic nature would also protect them from retaliation in the event of conflict (it's pretty tough to invade or destroy an underwater city). This could explain why they were the most technologically advanced of the Xindi. While the other Xindi were pouring resources into fighting, and possibly facing serious setbacks to their development because of it, the aquatics could be focusing on developing their scientific knowledge and their technology in relative isolation.

Think about it this way: What if after the fall of the Roman Empire, one European nation had managed to remain isolated, and never experienced the Dark Ages? They just kept advancing without a loss of knowledge or prosperity. By the time all the other nations in Europe managed to get back to where they were, the isolated nation would be hundreds of years more advanced.

28
Why did the Xindi test a mini-superweapon on Earth?
15
Can other species besides Vulcans do the Vulcan nerve pinch?
2
Why did the Xindi council reject using the bioweapon against humans?
15
Do other species abide by the Prime Directive?
9
Why didn't the Earth & Vulcan battle cruisers engage the Xindi SuperWeapon and Reptilian ship?
12
Why aren't the Xindi referred to anywhere other than Enterprise?
4
Why would the Vulcans take so long to translate the Kir'Shara?
2
Were the Xindi in Enterprise and the Xendi in The Next Generation the same species?
12
When was the Verteron Array built exactly and why wasn't it used against the Xindi when they were about to destroy earth?
16
Have we ever seen the Romulans successfully outmaneuver any other race or political group?