What happened to the multi-coloured Paradigm Daleks?

What happened to the multi-colored Paradigm Daleks, in terms of production and story? It's as if the BBC forgot about them. 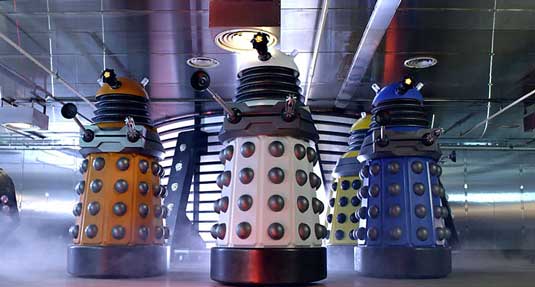 Out of Universe answer

The New Paradigm Daleks were dumped after a backlash from fans who thought they were stupid and a blatant attempt to merchandise to small children. They were referred to on multiple occasions in media as being reminiscent of the Power Rangers, TellyTubbies or M&M's

“Well I suppose if I'm completely honest - and it's all my fault, no one else's fault - I don't think that was a great idea,” he [Steve Moffat] told an audience at London’s Doctor Who Festival. “When I looked at them in person I thought 'my god, the new Daleks are awesome. they're so huge and powerful, they're brilliant.'”

“But I learned a grave lesson: which is that when you put them on screen, of course, they don't look bigger, they just make all the other Daleks look smaller.” - Radio Times Interview

“So I revised my plans and I now consider them an officer class of Dalek,” he explained. “You do seem them about from time-to-time. It just became a little bit mad in The Magician's Apprentice because there were so many different Daleks in there that I didn't want to confuse the eye.”

“They haven't gone away. We still have them. But that's the answer. The answer to most questions I find is that I've made a mistake.”

He was also asked about them more recently in a Q&A for Doctor Who Magazine. Suffice to say, his answer wasn't exactly filled with enthusiasm for the NP Daleks.

Q. I enjoyed 'Into the Dalek' very much... However, seeing that they were noticeable by their absence, I do have to ask, are the Paradigm Daleks ever going to reappear?

Moffat. You know when you ask someone if your bum looks big in this...?

And in an interview with Who writer Nicholas Pegg, it was stated unequivocally that the major reason to abandon them was the poor fan reaction.

Incidentally, on the subject of the New Paradigm Daleks, I asked Nicholas Pegg why we never see them anymore. His answer was that because of the negative response they’d received, they were now being quietly swept under the carpet, so I doubt that we’ll be seeing them on TV again anytime soon.

As you can see from this grainy out-of-focus footage smuggled out of the 2011 Doctor Who Experience, there appears to have been a civil war between the New Paradigm (NP) Dalek and the old Prevailing (P) Daleks, proving that P≠NP.

Bronze Dalek leader: We are the children of Davros! The new Dalek Paradigm is false! We are the one true master race!

New Paradigm Dalek leader: We are superior. We were created to ensure the purity of the Dalek race. You are inferior. You will be exterminated!

That being said, there do appear to be some remaining NP Daleks, as evidenced by this image from 'Asylum of the Daleks'. 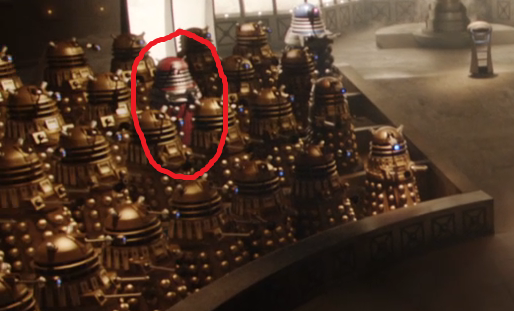 The multi-coloured Paradigm Daleks were unpopular among fans, and eventually Moffat decided to more or less phase them out, keeping them only as a rarely-seen "officer class".

It’s safe to say that this Dalek redesign didn’t quite capture the imagination of the public in the way the series makers had hoped, with many fans complaining that the new villains looked more like Fisher-Price toys/iPods/Renault Lagunas than the scourge of the galaxy.

Eventually, Steven Moffat told fans that while the new models were here to stay, the modern bronze Daleks weren’t gone forever after all – rather, the new Paradigm Daleks would be their bosses.

“The fact is, we're not going to lose the old Daleks. We're keeping them,” he said in Doctor Who: The Brilliant Book. “They're coming back. We'll just use them all at once, and have different ranks. All I've done is give the Daleks an officer class.”

This idea was put into action for 2012’s Asylum of the Daleks, which saw The Doctor a guest of the Dalek Parliament where modern bronze Daleks were commanded by a minority of new Paradigm Daleks. However, since then any episodes featuring Daleks have only featured the bronze Dalek design, so it seems the new Paradigm Daleks have been phased out due to their unpopularity.

Further discussion of the out-of-universe reasons for their disappearance can be found in this article.

There's no canonical answer in the TV show for what happened to the Paradigm Daleks, but a possible answer is provided by the Doctor Who Experience in Cardiff, which is perhaps semi-canonical since its storyline was written by Steven Moffat. In the story told there, the bronze Daleks exterminate the Paradigm Daleks because they don't consider them to be 'pure' enough (à la Dalek Sec in Evolution of the Daleks):

Bronze Dalek leader: "We are the children of Davros! The new Dalek Paradigm is false! We are the one true master race!"

New Paradigm Dalek leader: "We are superior. We were created to ensure the purity of the Dalek race. You are inferior. You will be exterminated!"

Dalek civil wars happened a couple of times in Old Who, so it's possible that a third occurred and led to the extermination of the Paradigm Daleks, following a brief period of Dalek cooperation in Asylum of the Daleks.

Further discussion of the in-universe reasons for their disappearance can be found in this article.

7
How many Daleks are left?
8
Why were New Paradigm “British Robots” featured in The LEGO Batman Movie?

14
“Pure” versus “Hybrid” Daleks
4
When Were the Daleks Created?
6
How did the Daleks regain their numbers?
33
Is it true that the Daleks have to appear in every season of Doctor Who?
9
Why are Daleks terrifying?
3
In what ways can Daleks be killed?
4
How do The Daleks and Genesis of the Daleks relate?
8
Why were New Paradigm “British Robots” featured in The LEGO Batman Movie?
4
Did the Daleks kill Davros?