Young adult/childrens novel about magical tree thats poisoned, where magic is damaged by computer use?

I'm trying to remember the book I read when I was younger it's about a boy or boys in a world in which if you go on computers it's bad for magic?

There was also something about saving a tree from being poisoned in its roots? 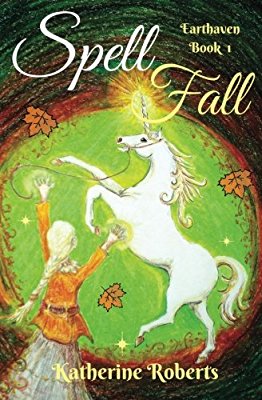 An exciting tale of kidnap and sorcery spanning two worlds in which 12-year-old Natalie discovers her mother was a powerful Spellmage, her father is a Thrall who sells spells, and her sulky stepbrother isn’t quite that bad after all. Can Natalie and the kidnapper’s son, Merlin, save the soultrees of Earthaven from being poisoned? They have until Halloween, when the boundary between worlds opens, allowing unicorns and magehounds to join the battle against a very modern evil.

Computers are bad for magic:

Apart from Claudia, who used to be some kind of scientist before his father found her and brought her to the lodge, all the spellclave were wary of his computer - technology was supposed to interfere with Spellmage powers.

The poisoning of the tree:

Legs braced and sweat streaming down their faces, four men wearing gloves like Lord Hawk's dragged the writhing tendrils out of the earth and streched the root between them while Lord Hawk used his stick to scrape off a patch of Oq's protective fur. He carefully dripped black liquid from the canister on to the exposed soultree flesh. Steam hissed out of the trench, along with the sickly smell of rotting fruit.