Has any Marvel or DC comic ever shown graphic nudity?

The release of the Deadpool movie marks the first R-rated movie based off a "mainstream" comic character in more than a decade. Although it has been wildly successful, initially there was a lot of skepticism about releasing an adult-targeted movie adapted from what are typically PG-rated comics. To get an R rating a movie must include things that are just not seen in mainstream comics: intense violence, vulgar language, and graphic nudity.

I know that Marvel has, in the past, experimented with R-rated comics via their MAX line, of which I have only read Alias. In included a generous helping of vulgar language and very strong sexual content, but stopped just short of showing e.g. Jessica Jones' nude body. This has me curious if that was a line that Marvel (and DC, for that matter) has ever crossed before. Unfortunately, none of the MAX imprint is available on Marvel Unlimited, so I can't easily check.

Has Marvel or DC ever published a comic (under any of their imprints -- MAX or Vertigo count) that included graphic nudity of any kind?

Since this question is inspired by an R-rated movie I'll define "graphic nudity" the same way it's generally defined by movie and TV ratings systems, as:

(In particular, exposed buttocks do not count, as those are apparently tame enough for network television.)

Note that I'm not talking about characters that are obviously naked in-universe, but where the artist has used shadow/environment/etc to maintain modesty. I'm aware of quite a few of those (e.g. the famous recalled Elektra issue, the "naked Thor" panel, etc.) Rather, I'm asking about panels where a character's nudity is clearly and unambiguously shown in the panel.

NOTE: SCREENSHOTS ARE NOT NECESSARY. Thanks

In Alan Moore's graphic novel, Batman: The Killing Joke, Barbara Gordon (aka Batgirl) is paralyzed when the Joker shoots her. He then strips her naked, photographs her, and tortures her father Jim Gordon by forcing him to look at the photos.

On one page, we see a number of the photos, including one in which her breasts are visible (NSFW link to the page in question, along with the original, more graphic version, which the book's artist, Brian Bolland, was forced to tone down). 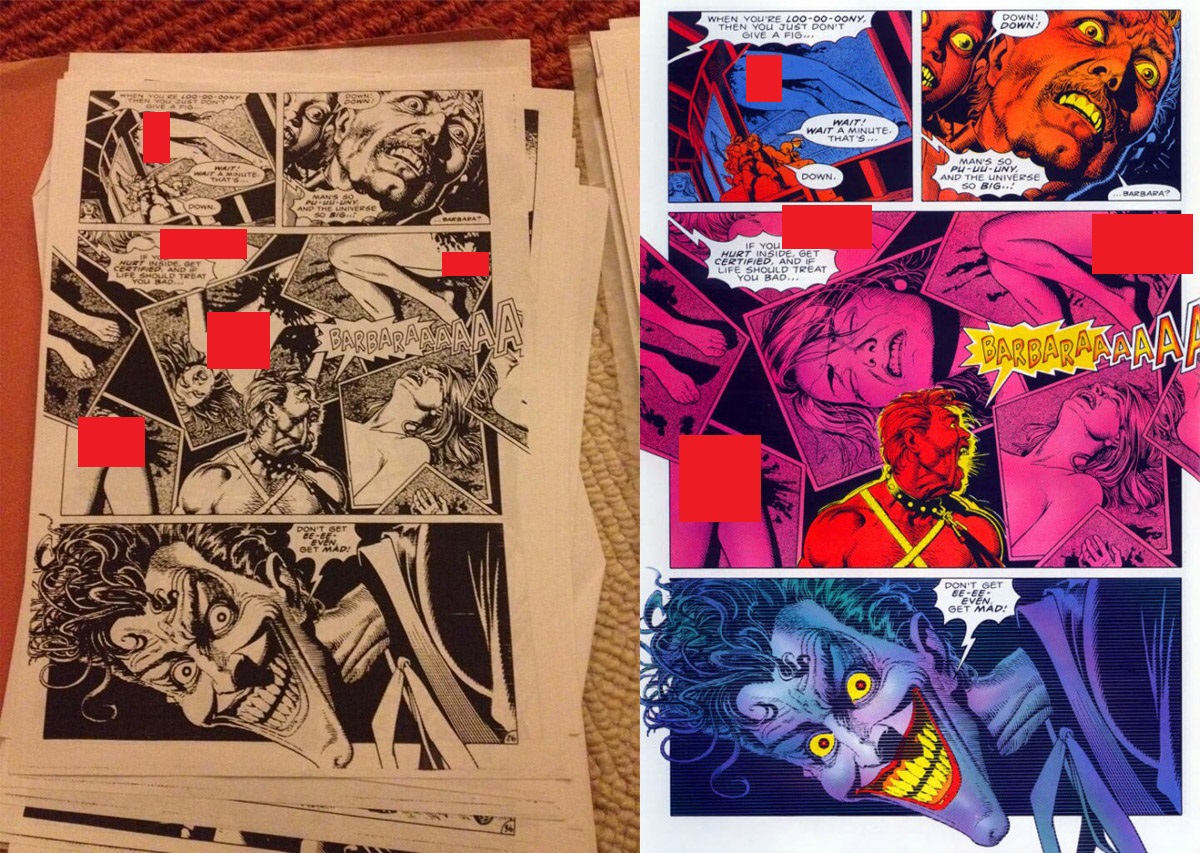 Since the book was published, there has been some debate over whether the Joker merely photographed Barbara, or whether he also sexually assaulted her. Either way, the graphic novel is brilliantly written - among the best Batman stories ever told - but it is also very disturbing.

Another Alan Moore masterpiece, which has a number of scenes that might qualify: 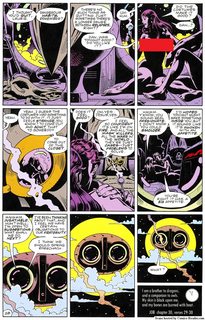 There are a couple of panels of a nude woman in a clearly sexual context (NSFW links 1, 2) 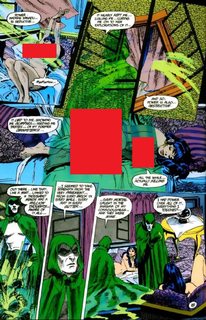 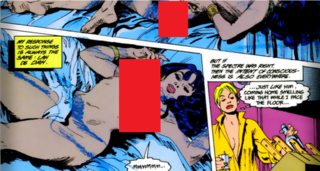 Various issues contain nudity and sexual content, including this issue of Supreme Power (NSFW link). Thanks to Radhil for mentioning this in comments. 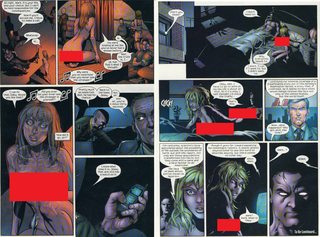 You said that Deadpool was the first R-rated movie based on a mainstream comic book character you are aware of; other such movies include most adaptations of Punisher, as well as Blade, and an R-rated director's cut of Daredevil (not to mention the upcoming Wolverine 3, and - in light of the success of Deadpool, probably a slew of other movies in the near future). Less mainstream comic book movies with an R-rating include The Crow, Kick Ass, Watchmen, Spawn, a couple of adaptations of Judge Dredd, Tank Girl, 300, Sin City, V for Vendetta, and From Hell, to name a few. Of these, you may have noticed, several (Watchmen, 300, V for Vendetta, and From Hell) are based on Alan Moore comics.

Some examples with "sexual nature":

I'm not sure whether this is sexual or not:

There are also some non-sexual scenes with nudity which are not so brief:

Watchmen is a pretty well-known DC comic and has a generous helping of graphic nudity, both film and book.

EDIT: Seeing you discount Manhattan and ask for explicitly sexual nudity, there's still a whole host of Alan Moore pieces that have sexual nudity. V for Vendetta and From Hell spring to mind.

There is quite a bit of it in the Vertigo published Preacher series. The series is pretty extreme in a lot of other ways too. AMC is currently adapting it for a television series.

I'm not having much luck finding any images of the relevant panels online. If anybody knows where they could be found, I would like to edit this answer to add the relevant links.

I don't remember any specific examples, but I seem to recall that my young teenager brain was quite happy with the frequency with which breasts were displayed.

Dead of Night Featuring Man-Thing #2 (2008) shows Jennifer Kale's nipples as she is changing into her costume. In this non-continuity MAX retelling of early Man-Thing stories, Jennifer and Andy have a wider age gap, she is his legal guardian and works as a pole dancer to support them.

Lodestone/Rhea Jones in Doom Patrol is seen in sheer nighties while comatose early on the Grant Morrison run, nipples clearly visible though genitals are not. Later her body becomes a pupa and Rhea in a new body climbs out of it, destroying her old body in the process. She never wears clothes in this form. Her nipples are often visible, but her genitals are always in shadow. Morrison apparently had little interest in the character and kept her alive due only to reader demand. At the end of the story arc in which she appears in her new body, she decides to explore deep space, promising that she will visit. I believe she has appeared only in a flashback to the Kupperberg run since.

Ultimates 01 (Marvel) Iron Man and Black Widow have a sex tape that leaks out to the public. Graphic scenes from the tape are shown playing on screens in the Stark Mansion

8
Is Deadpool as "R-rated" in the comics as he is in the Deadpool movie?
50
What Marvel Superhero or Supervillain Has the Most Secret Identity?
75
Why have most Superhero movies ditched the "Secret Identity"?
7
Are there any Asian superheroes in the Marvel comics who have ever had their own solo series, as of 2016?
19
How can Hank shrink without his Ant-Man suit?
14
Is Captain Marvel as strong in the comics as Kevin Feige suggests she will be in the MCU?