I remember reading this book that was very interesting but never really got to finish it.

All I can remember is that there was a boy who snuck out to this casino like place and played a sort of shooter video game against some random dude. Almost got caught by the authorities by being there. The boy was extremely good at it.

He had to go to school but it was some virtual class? He didn't have a real dad I think his father figure was his older brother? (possibly?). But his brother didn't trust the government or something and accused one of the famous model/players on tv to be fake.

Anyways, the boy got admitted into some school for what he was good at, the virtual video games. But they weren't normal games, they had installed some chips into the students and they trained by entering a different reality to fight. They could feel pain like a normal fight.

There was some higher ranked girl who was basically the best of the best and the boy strived to beat her in a fight. I don't want to go on too long but I'd appreciate if anyone can find the title of this story it was very good!!

As has been said, there are many possibilities. perhaps:

The earth is in the middle of WWIII in Insignia, the first entry in S. J. Kincaid's fast-paced sci-fi adventure trilogy perfect for fans of Ender's Game.

The planet's natural resources are almost gone, and war is being fought to control the assets of the solar system. The enemy is winning. The salvation may be Tom Raines. Tom doesn't seem like a hero. He's a short fourteen-year-old with bad skin. But he has the virtual-reality gaming skills that make him a phenom behind the controls of the battle drones.

As a new member of the Intrasolar Forces, Tom's life completely changes. Suddenly, he's someone important. He has new opportunities, friends, and a shot at having a girlfriend. But there's a price to pay. . . . 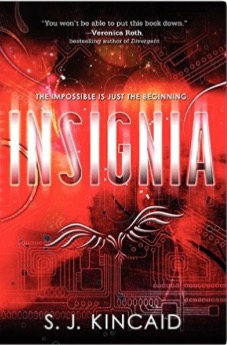 It does have implanted brain interfaces that let the kids play virtual games (first) and then (later) control unmanned ships battling in space.

Meanwhile, in the late 21st century, technology has advanced so that the internet has become a vast Virtual Reality network. The most realistic connections to the network are achieved by using an expensive, surgically implanted bio-port interface at the back of the user's neck called a 'Neurocannula'.

However, around the world, children are falling victim to a disease known as Tandagore Syndrome, which in its most serious form is a deep coma from which the patient cannot wake.

Irene "Renie" Sulaweyo, an instructor in "virtual engineering" at a polytechnic institute in Durban, is devastated when her younger brother, Stephen, falls victim to this disease.