The hero was falsely convicted of a crime, and was sentenced to life in prison at hard labor. He resists and is knocked unconscious. As he is taken to prison, the guards carry him past a pallet of power cartridges. These are cylinders about the size of a D-cell battery, containing potent atomic fuel encased in a metal called "intertite" (I'm not sure of the spelling) to contain the radiation. Our hero surreptitiously steals a cartridge under the noses of the guards and hides it on his person.

The prison is an underground mine about a mile below the surface. The mine is dome shaped, with the upper part of the dome far too high for the prisoners to reach. This is the location of the only entrance/exit to the mine, with a chamber containing armed guards. The prisoners are dropped from here to the floor of the mine.

The prisoners labor in the mine to extract intertite. If they mine enough that day, the guards will give them food and water. Otherwise the prisoners starve.

Our hero hordes intertite, and uses it to form a crude rocket engine. When it is finished, he take his stolen power cartridge, scratches the base, then inserts it into the engine. The atomic fuel blast with the might of atomic power (which can only be contained by intertite), and our hero clings to the rocket, rides up to the guard post, overpowers the guards, and escapes.

I think I've found it! I believe this is Island in the Sky (1961) by Manly Wade Wellman. It was published (only) as a hardcover with this cover: 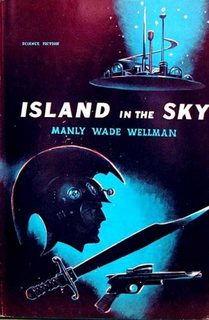 I don't have this book, but it appears to be an expanded version of the novella "Island in the Sky", originally published in Thrilling Wonder Stories, October 1941. (Though the novella was anthologized in the hardcover The Giant Anthology of Science Fiction: 10 Complete Short Novels so you might be recalling that instead.)

The novella opens with the hero, Blackie Peyton, being released from prison (the Pit) for having saved the life of a guard, whereupon he is effectively conscripted as a gladiator by General Argyle of the ruling Airmen. Simultaneously, a "committee" opposed to the Airmen tries to recruit him.

Peyton's sympathies are with those trying to overthrow the Airmen who rule the world from their floating city, and restrict all transportation and communication between the cities of Earth. The committee is discovered, and Peyton is beaten but refuses to give up any names, so he is consigned once again to the Pit:

"Below the Pit," Argyle said, "there's a deeper and tougher hole yet, where the prisoners go who are too tough for even the atom-smashery. Food's thrown down once a day. No lights. No beds. They mine ore to make inerton for the atomic containers. If they don't send up their quota, there's more misery. Now start talking, or down you go."

And they only get food if they make quota:

"You were three-quarters of a ton short on delivery yesterday."

"No excuses. If you don't make eight tons today, you don't eat tonight. You get tear gas instead. Fix it up among yourselves."

You are recalling the episode of him escaping from the Hole (and the Pit):

"Swell!" Peyton cried. He went to a little nook in the tunnel. From it he dragged something that looked like a big, rough, megaphone, six feet long and tapering from a finger-wide mouthpiece to a two-foot bell. It was dull black and he had trouble lifting it. "This is what I've done with the inerton I found."

"If we broke that thing up and mixed it with rock and dirt," a convict said hurriedly, "it could make enough ore to-"

"Nobody breaks it up," stated Peyton. "This is a flying machine. It's crude, but it's inerton and it can fly, if it has atomic."

He took from a pocket of his soiled trousers a dark cylinder, also of inerton, about as large as a pistol cartridge. At the sight of it, the other convicts shrank away.

"Don't handle that carelessly," warned one.

"I know what I'm doing," Peyton said. "I came down here to do it. Go ahead, stick out your eyes. I let them put me down here, so I could get my hands on inerton and atomic and take them away. I had to be brought down on a stretcher, but I got enough strength to reach out and steal this from a dump we passed."

And releasing the atomic:

The light of his face was barely enough to see by, but he managed. Setting the cone on the floor, its tip pointing toward the place where the trap-door would be, he drew his thumbnail sharply across one end of the little cylinder of atomic. With orderly haste he set it in the tip of the cone, scratched-end down, and fastened it there with a piece of the metal. Then he threw his arms around the upper part of the cone.

Something hissed, like escaping air. The cone stirred, rose. He clung with all his strength and even then was almost dislodged. The speed of the rising cone was something less than a bullet, something more than an elevator. Peyton saw the trap-door above, ducked his head and let the cone-tip strike and hurl the trap open.

He successfully makes his escape, stealing more cartridges of atomic on his way, and exits back into New York to plot against the Airmen.

You can read the novella version at the Internet Archive.