Who is the first villain to use kryptonite against Superman and how did they know it was his one weakness?

I'm going to assume it's Lex or maybe Metallo?

But do we know for sure, who was the first villain to use kryptonite against Superman?

Where did they obtain it and how did they know / discover it was his one weakness?

I'm hoping all these details are covered in the same story.

The first use (in any media) was in the radio play "The Scarlet Widow" from 1943. The eponymous villainess steals kryptonite from the Metropolis Museum and uses it to build a cage for Superman, incapacitating him for several episodes.

Interestingly, the plot device was apparently intended to give the Superman voice actor (Bud Collyer) a few days holiday as his character was restricted to pre-recorded grunts and screams.

The first use in any comic serial was from Superman #61 ("Superman Returns to Krypton"). Superman fights a self-styled Swami whose kryptonite turban-stone causes Superman to become weakened. This edition is also famous for being the first time that we see the planet Krypton in a non-exploding state. 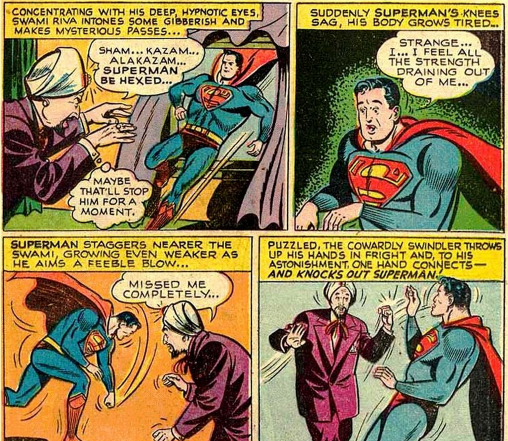 12
How are there only 5 Braniacs in 1000 years?
4
Can Kryptonite affect Superman's mind?
8
How did Superman know Supergirl was his cousin?
9
Which Lex is this?
4
superboy/girl and the legion of superheroes
4
Did Superman ever regain his memories of his Legion adventures with Supergirl?
9
How did Green Arrow manage to make that arrow in the Crisis on Earth-X crossover?
8
When did Superman first use his super breath and freeze breath?
5
What storyline do the characters in “The Death and Return of Superman” game follow?
10
Is there proof that Jerry Siegel and Joe Shuster's Superman was directly inspired by Friedrich Nietzsche's Übermensch?