What is the population of the Undying Lands?

Is there any Canon reference as to Valinor's population? All the Elves of old who survived conflict apparently live there and all the remaining Elves from Middle Earth went there, so how many are there there? I'm assuming the population is predominantly Elvish... with a few temporary guests.

AFAIR, there are no mentions of figures in which that gives the total numbers of a nation. Instead, Tolkien describes the armies and nationa by referring other nations he had created before. In Battle of Unnumbered Tears, Tolkien states:

The army of Turgon issued forth from Gondolin, ten thousand strong, with bright mail and long swords and they stationed Southwards guarding the Passes of Sirion. - Source

With that simple statement, you can practically calculate populations in masses. Everything starts with Gondolin's population and you can calculate the rest.

In fact, this Tolkien enthusiast did the maths and you can take a look at how he did it by reading his article (tl, read half).

According to the same person, the figures are like this: 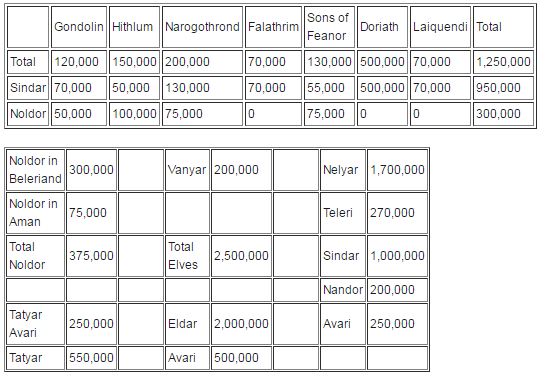 You can read part 2 of his article in here.

It is based on the texts, scripts and book quotes but I cannot say it is canon because those figures don't belong to Tolkien, this enthusiast just calculated them based on what Tolkien created.

Also, there is this google discussion about population control in Valinor (which is more related with what you asked).