In the comics is Two-face's coin a regular coin?

In Christopher Nolan's The Dark Knight, Harvey Dent starts off with a double headed coin, which then gets turned into having two different sides when he becomes Two-face.

Is this the same in the comics?

Is Two-face's coin a regular coin?

In the original Detective Comics #66, after becoming hideously scarred, Two-Face disfigured a two-headed silver dollar with his knife. The coin itself originally belonged to Vincent "The Boss" Maroni and is usually shown as having scratches on the side with either Lady Liberty or, in later serials, Lady Gotham.

This theme is continued in future comic serials such as Nightwing

And the rebooted Detective Comics 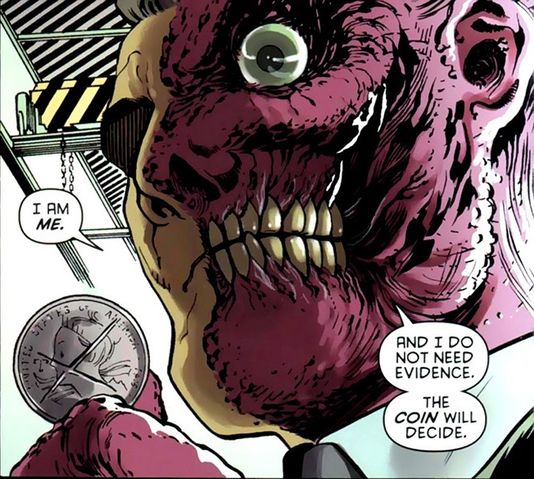 Two Face's coin would likely have been a "Peace Dollar," the most common dollar coin in circulation at the time of his origin in 1942. Minted from 1921 to 1928, and again from 1934 to 1935, the Peace Dollar had the head of Liberty on the obverse, and an American Bald Eagle perched on a rock over the word "Peace" on the reverse. They are 90% silver and 10% copper. Therefore, the "lucky" two-headed dollar would have to have been a special novelty piece, as no such coin was ever issued. Peace dollars are very beautiful and highly collectible today. Personally, I like the idea of Two Face's coin being a regular Peace dollar with the obverse defaced and the reverse pristine, but that's just me.

27
Did the Joker mislead Batman, or was the Joker himself ignorant of the facts?
11
Why didn't Batman tell Harvey Dent that he tried to rescue Rachel?
1
Why does Bane ask only one guy to stay in the plane wreckage in Dark Knight Rises?
7
What animated Batman movie had an old Bruce and young female Robin?
15
Does Joker wear makeup in the comics?
29
Did Two-Face's coin ever land on its edge?
12
Is Alfred the moral conscience of Bruce Wayne/Batman?
5
Has Batman ever unintentionally/accidentally killed someone?