I read this sci-fi novel in the late 80's, early 90's. It was somewhat comical, and may have dealt with one or more squadrons of troops retaliating against an alien invasion.

The only thing I can definitely recall is that someone invented a very useful gun that, at the end, they named after one of the downed soldiers, calling it a "Fuerstenberg" gun, with some sort of comment on how it wasn't always the best but when it was, it was great. "First in war, first in {something}, Fuerstenberg", is all I can remember of the slogan. Searching against that term, I can't find much relevant. I'd love to know the name of the book and author. I don't believe it was a series.

I recall reading some "Bill the Galactic Hero" around the same time, but I don't think it's part of that series.

I just found it, Illegal Aliens, by Phil Foglio and Nick Polotta. I may have been spelling Fuerstenberg wrong. 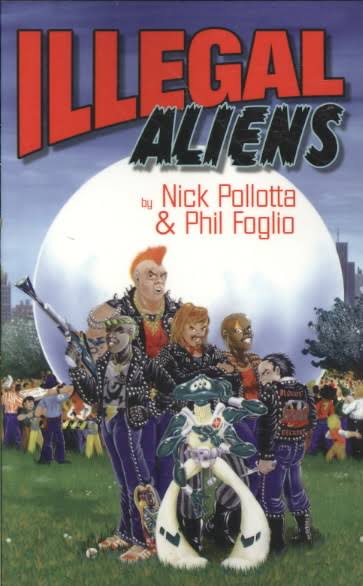 From the Amazon synopsis:

Prof. Rajavur and his 'First Contact Team' had been patiently waiting years for aliens to land on Earth.

Leader Idow and the crew of the starship, All That Glitters, were just looking for an unknown planet where they could land and have a little fun teasing the primitive natives.

So it was pure bad luck that the first humans the alien tricksters encounter is a ruthless New York City street gang, the Bloody Deckers. With more starships landing and the world in chaos, Rajavur and his First Contact Team have to move fast in a desperate plan to rescue the innocent aliens from the evil street gang! Then again, maybe they should join forces with the street gang to protect the Earth from the furious aliens?