How did Beverly Crusher attain the rank of Commander?

Reading Dr. Crusher's biography on Memory Alpha, I don't understand how it is exactly that she got to be a Commander. When did she put in the time as an officer in a non-medical capacity, enough to merit this promotion? Or can you advance in rank merely by serving as a Doctor on a ship or in another military installation?

Edit: Let me be more specific.

Did she ever serve on any ship at all before her promotion? And her passing that test? I understand that people might be able to advance not through actual command posts, but still - no field experience with significant authority, and you are deemed capable of commanding a starship? I don't get it.

It is implied that she passed the Bridge Officer's Examination

In TNG 'Thine Own Self', in the opening scene we see Commander Crusher taking the night shift:

TROI: Fine. It was good to see some old friends. I'd lost touch with most of them. It's interesting to see the different paths some of their lives have taken. Beverly, you don't usually stand a watch on the Bridge even when Data's not here.

CRUSHER: I volunteered tonight. I like to put in a little Bridge time now and then, stay on top of operations, tactical procedures. The truth is, I like it. It's not every doctor who gets to command a starship, even if it is the night shift.

TROI: May I ask you a personal question? Why did you decide to become a Commander? I mean, you didn't need the rank in order to be Chief Medical Officer, so why put yourself through all the extra work?

CRUSHER: Oh, I don't know. I never even thought about my rank for a long time. It seemed pretty trivial compared to being a doctor. But then, about eight years ago, I started to feel like I wanted to stretch myself a little.

I've bolded the above two sections. The first section shows that, you're quite right - not every doctor can become a commander of a starship. The second phrase I've bolded shows that Crusher had the desire to undergo that 'extra work' to become a qualified commanding officer. Later in that episode we see Troi eventually passes the Bridge Officer's Examination, so it seems to me that it's implied she simply did whatever is needed to become a commanding officer, namely passing the bridge officer's examination.

The Memory Alpha page on the Bridge Officer's Examination indicates that it is more than the single test we see Troi performing in the Holodeck, explaining what the 'extra work' is that Troi refers to at the start. That page also says that one must pass this examination to command a Starfleet ship, hence it is implied that Crusher passed the Examination.

She was promoted through the ranks. Commander is a rank, not a title like "Skipper". As much as some people argue that Star Fleet isn't military, it has a military rank structure very similar to the U.S. Navy:

In the U.S. Navy, I have worked with full bird Captains who were medical officers. They advanced through the ranks the same as any other billet. There are quite a few officers of high ranks who have never been in COMMAND (Probably no Admirals, though). If you command a ship (no matter how small), you are referred to as "Captain" or "Skipper", but only for the time you are in command. You can command a small ship as a Lt. or Lt. Cmdr. You also get a nifty Command pin to wear the rest of your time in service, that distinguishes you from other officers who have never commanded a ship. 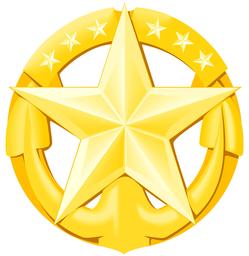 (There's clearly some flexibility within a job, because we see people promoted without any obvious change in responsibility. So it's possible that a Lt. Commander and a Commander can do the same job, and the difference between the two is seniority.)

So Crusher would be a commander because she, as part of her job managing the medical department on the Enterprise, might have to give orders to Lieutenants, who are in turn giving orders to Ensigns. Remember, she's CMO on a ship with over a thousand people aboard. She probably has a staff of dozens that we just never saw much of. Bashir, by comparison, was a Lt. JG early in DS9 when the station was underpopulated. He was promoted a step later in the show when the station gained population, and presumably medical staff. Similarly, Sisko is promoted when commanding DS9 became a bigger job.

Your question is similar (not identical) to asking why Col. Potter in MASH attained the rank of colonel, when he had no experience leading troops in combat.

An officer in the armed services can attain high rank by outstanding and long service in his or her speciality. Adm Grace Hopper was mentioned in another answer. Her speciality was computers.

Starfleet ranks are modeled on the ranks in the US Navy, as another answer said. Commander in the USN is the equivalent of Lt. Colonel in the US Army. In the Army, Commander Crusher would be Lt. Colonel Crusher.

In addition, Beverly trained & passed an exam to qualify her for command of a starship. This was probably a long and arduous course, involving many simulations of battles, including the Kobayashi Maru. In universe, Starfleet would have wanted many officers on the ship to qualify for command -- deep backup on a long voyage to the unknown.

Out of universe, whoever was in command of Star Trek at the time probably wanted to show women in command positions, hence Crusher and Troi.

To repeat, Commander Crusher's rank of Commander (equivalent to Lt. Colonel) has nothing to do with her qualifying to command the ship.

Being thrust into command unexpectedly and with little experience is what training is supposed to prepare an officer for.

30
Why did Dr Crusher have a seat on the bridge?
8
Did Wesley Crusher exhibit leadership/command abilities?
44
Why does Tom Paris get Starfleet rank, but the Maquis get provisional rank?
38
Beverly Crusher's rank aboard The Enterprise
10
How did Worf's adoptive father know O'Brien's rank?
91
Is this Beverly Crusher?
10
Can Operations Officers attain the rank of Commander?
28
Why did people hate Wesley Crusher?
22
In Star Trek, what's the rank progression from cadet to captain?
10
Besides the famous captains, do we actually know anything any Admiral did to earn that rank?