What did the crew do in their spare time on the USS Enterprise (NCC-1701) from the original series?

We all know that on the ship where The Next Generation is based, the NCC-1701-D, has many extra curricular activities. They have a holodeck, tennis courts, and other social areas.

However, the original ship (NCC-1701) lacked some of these amenities. What did the crew, and those aboard it do to pass time (when they weren't saving the universe)?

The various Recreation Rooms seem to be the ship's social hubs with singing, games and other entertainments.

The ship also boasts an extensive dojo and sports facility

In the Animated Series, the Enterprise had a moderately advanced hologram suite, one capable of producing rural, coastal and arboreal scenes with realistic sounds and wind.

Enterprise's rec deck is the largest and best equipped of any in Star Fleet. Off-duty crew members will find a variety of games and pastimes from which to choose within its walls.

At the front of the room is an immense, wall- mounted viewing screen, the largest aboard ship. This three-dimensional imaging device can be programmed to display any one of thousands of twentieth-, twenty-first, or twenty-second century movies, and also holds in its memory a lesser number of twenty-third century releases. Live sporting events, carried by subspace video comlink, can be displayed as well. On rare occasion, the unit is used to display Star Fleet Personnel Address broadcasts for crew assemblies.

Beneath the viewing screen is an information display alcove. Five small screens exhibit, upon request, a choice of pictorial histories, including those of Star Fleet, the Federation, the countries on Earth, Vulcan, Alpha Centauri, and other Federation worlds, and all vessels which have borne the name "Enterprise." Reading lounges and snack bars line the port and starboard bulkheads.

Restrooms, designated "male" [portside] and "female" [starboard] for the convenience of non-crew visitors, are located near the rec deck's rear wall on the lower level.

Two turbolifts on the forward end of the room provide access to F Deck and the rec deck's balcony around. This upper area houses smaller rooms where three-dimensional chess and checkers may be played, as well as cards, backgammon, and other non-electronic games.

A raised platform in the center of the lower level floor features a diversity of electronic entertainments. Games such as Concentrex, Challenge, Eye-Q, and Phaser Duel are programmed into consoles which stand within sunken seating areas. A shufflelight board in the middle of the floor may be used for tournament play.

Eight immense viewports in the rec deck's outer wall give crew members an unspoiled view of the ship's secondary hull and warp nacelles, and are useful for planet observation while Enterprise is in standard orbit. 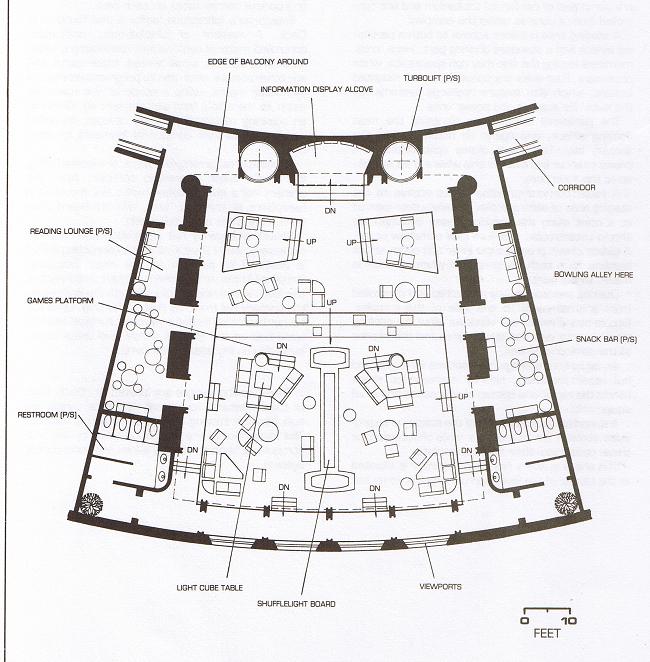 In addition to Richard's answer, Spock played chess with a variety of crew members and visitors, McCoy plays cards and we all know how Scotty enjoys his drink every once in a while :) 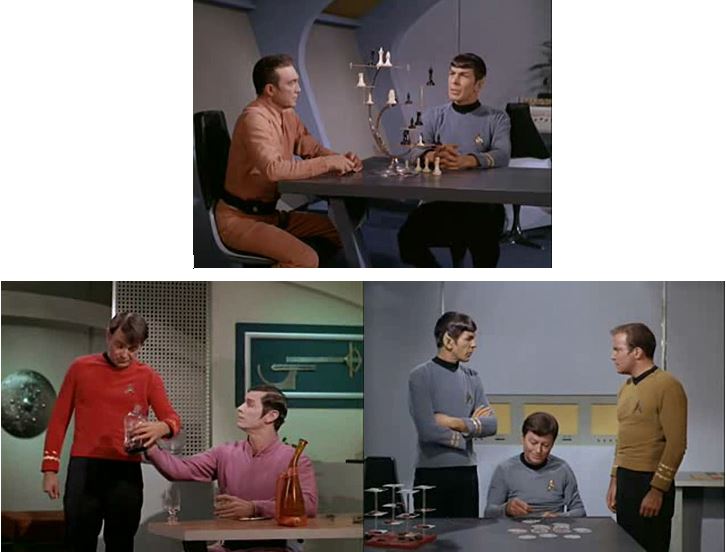