A pair of agents of some sort are being sent to some planet, where the destination may be a recently rediscovered colony. Both the agents and the colony are operating in some sort of shared or similar background of something very organized religious, definitely religion as The State. Novel begins with someone being in a very boring, very high level religious bureaucratic meeting where a/the main character is yawning with his mouth closed within the first paragraph or so.

A rather rough paraphrase of the opening paragraph of the book is:

NameOfCharacter yawned, closed mouthed, as he listened to the [something about very boring ecclesiastical bureaucrats] going on and on. [Something further about someone just always droning on in such meetings]

A story excerpt from the inside front cover/back cover has one agent talking to the other, something to the effect of:

"And just what did you think you were going to do when you got there?!"

"Oh, I was going to have a small mission, do good works among the poor..."

I have a very vague memory of a reddish cover or title letters on the book spine.

story-identification books novel religion
share|improve this question|||||
edited May 29 '19 at 2:57

Based on your description of the cover, this is probably The Strayed Sheep of Charun (1977) by John Maddox Roberts. I originally thought it might be Cestus Dei (1983) which is an expanded re-write of the other, but the cover of the original fits your description better. 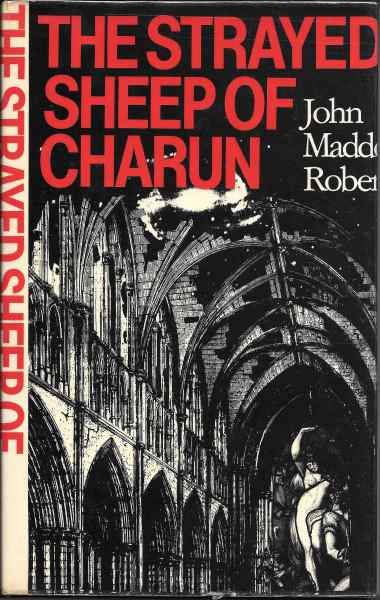 The rest of this is based on Cestus Dei because I can't find even a single review of The Strayed Sheep of Charun; nevertheless I'm guessing that much of the plot will be the same.

The entire settled galaxy is divided among the various major religions, that meet as a body called the "Unified Faiths" to mediate disputes and resolve problems.

The opening paragraph is:

Archbishop Hilarion occupied his rightful seat in the Great Hall of United Faiths with the stoicism of many years of experience. On the floor, a minor imam of some obscure Islamic sect was droning a speech welcoming the new representative from Shriva, which, despite its name, was a planet settled entirely by Mormons. The archbishop yawned expertly, without moving a muscle of his face.

In the story the newly re-discovered Flavian system is found to have a planet, Cadmus, creating genetically-engineered automata ("the soulless") which is an offense to all of the unified faiths. A Jesuit commando, Father Miles of Durga is sent by the Re-established Church of Rome to lead a mission try to convert the pagan population back to the Roman church. After receiving his orders he decides to take only the young Franciscan Friar Jeremiah who wishes to preach to the poor of the Flavian system in the Franciscan tradition.

This appears to be similar to the other section you recall:

"Now, young friar," said the priest, changing the subject with bewildering rapidity, "what will you be doing when we get among the Flavian worlds?"

"Why, Father," stammered the friar, "I hardly know. This is my first mission. I suppose I will have to begin proselytizing on my own, among the poor."

"On your own? In what by all reports is one of the most corrupt sectors we have ever come across? You were shocked by what you saw on Gravitas, and that was just a training school for priests."

"To be sure, Father, I am inexperienced, but I find that sophistication comes with travel."

"True enough." snorted the priest, "but your order doesn't give you sufficient preparation."

"I shall pray for you too. Friar. No wonder the casualty figures are so high among the Franciscans. Mark this, my boy: A ruling class that lives by exploitation of the less fortunate lives in perpetual terror. If they think that there is new thought stirring among those masses, then they will react with hysterical brutality."

There is more detail in this review on Goodreads.

Not the answer you're looking for? Browse other questions tagged story-identification books novel religion or ask your own question.

9
Secret agent that also sings opera and travels through windows
6
1960s SF novel with sub war, telepathy, dolphins, recreational drug that makes you sick, then cures you for fun
10
Possible tête-bêche book - symbiote on back/ lost colony finds gun in spaceship
15
Looking for a fantasy series with ferrets, elves and a foul mouthed dwarf
13
A story about suppression of the ultimate secret to resolving all human disagreements
16
Old SF novel about a white-haired young woman, alien or half-alien, who tutors human kids
17
Sci-fi book where a mutated insect's bite in space colony grants superpowers
12
Older sci-fi novel about insectoid winged alien invaders and Christianity