It was a children's book my aunt once got me. Its a book about a world of elfin like creatures with bumps on their foreheads who are very akin to druids and kindly villagers and grotesque goblin like folk who live among them as guards and bureaucrats. The book came with a ribbon book mark with a card to translate the runes throughout the book. I cant recall the name but I do remember the name of the dark overlord entity the book alluded to. Mulcifer, I believe it was. The last few pages of the book were a map of the land with many of these runed massages and a large hedge maze followed by a mural of the more elfin folk dresses in robes with a golden apple. If anybody can help me with the name I'd be greatly appreciative.

Small update. Three recurring characters who appear throughout the book. All three are of the elf like race and I believe are all in the front cover. The first is a chubby chronicler who is supposed to be writing what your reading. He is dressed in robes similar to a midevil friar. The other two are small children. A boy and a girl. I dont remember clearly what they wore but I think the boy wore overhauls and a red cap and the girl a plain dress. Similar to maybe German or Scandinavian clothing. The chronicler appears occasionally but the children are often experiencing what is being written about. Either playing or sneaking about.

The book is formatted similarly to the Ology books (Dragonology, Wizardology, etc.) as opposed to a straight forward story.

For those who may be curious, I found the book.

Caleb Beldragon's Chronicle of the Three Counties by Paul Warren. 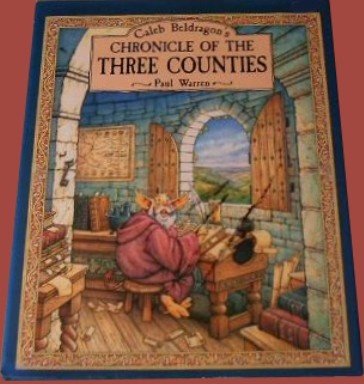 Long oppressed by the ruthless Lord Mulciber, the Gibblins hope to restore their exiled king by finding a legendary stone called the Malbigon.

Not the answer you're looking for? Browse other questions tagged story-identification books art or ask your own question.

5
fantasy book about a boy drowning in ice and waking up in a fantasy world
2
Fantasy book about a boy drowning
5
Children's book series featuring a pair of boys called Broccoli and “The Chronicler”
7
Need help finding a Fantasy Book with a sword wielder and sight sharer
10
80s book similar to Narnia but with a more Celt feel, allusions to Finn MacCool and eating “the salmon of wisdom”
8
YA book about a girl with multicolored hair who possesses some kind of power
7
Help with identifying book about talking dog from outer space?
6
Book series - Boy finds gem and is transported to a fantasy world