Were the Isengard Uruk-Hai swords supposed to be armor-piercing? 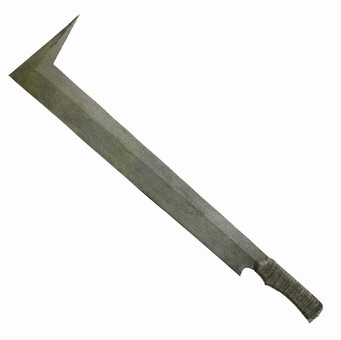 Notice their shape and the hook on the edge.

They're obviously not designed for sword fighting due to their odd shape and weight forward design. What was these weapon's base function?

Yes, the swords (Spike mainly) can be used to pierce armor, but the primary function of the "hook" was to counter the horseman of Rohan

The hook was used to disembowel horses as the riders rode past, and to pull riders off their horses. They were not used primarily as anti-armor swords. The Uruk Hai swords were mass produced in a short time, and would not have had the strength to repeatedly pierce armor. Much better against fleshy targets like horses, and for chopping once the rider is on the ground. If you want to pierce a soldier's armor, you really need a pointed sword or a spiked warhammer/axe to pierce through weaknesses in plates, and the suggestions @Oak puts forward. The purpose of the Uruk-Hai swords were to get riders off their horses and hack them to pieces on the ground.

Here you can see some comparisons of LOTR armor types. Rohirrim wear very little armor, usually sporting mail and boiled leather. The Uruk-Hai's cheap steel would be more than enough to hack through this type of armament.

Absolutely yes they were designed to defeat armor.<

The weapon was obviously meant for hacking, not stabbing. (No pointy tip) The reverse spike is reminiscent of the spiked tip on the reverse side of a mideaval battle axe or war hammer, a devistating anti-armor weapon. These were specifically designed to defeat/penetrate heavy armor plate and to penetrate and pull down shields. It's all about psi on impact.

Try it some time, it works perfectly. They were also used to 'hook' shields and pull them down to expose enemy combatants for further attack.

The main weapon by foot soldiers against cavalrymen was actually the pike or long spear. Just let the horse impale themselves as they charged into them.

The only way you could even >possibly< 'gut' a heavy cavalry horse in full charge is if you are under it... not a good place to be.

You can't deftly side-step as they go past and try it from the side because they actually have armor on their sides and they charge stirrup-to-stirrup, side by side from 100-500 horses wide. They were basically the main battle tanks of mideaval warfare.

Long polearms are the only chance for a footsoldier to defeat a heavy cavalry charge.

Not the answer you're looking for? Browse other questions tagged the-lord-of-the-rings movie tolkiens-legendarium or ask your own question.

10
What is the correct name for the style of sword the Uruk Hai use?

6
How much does the average adult male Dwarf weigh?
3
Genetic Defects of the Uruk-hai
11
Trolls and the Olog-hai
10
What is the correct name for the style of sword the Uruk Hai use?
7
Do Orcs and Uruk-hai sleep?
15
Why were there so many orcs without armor at the Battle of Helm's Deep?
22
What are the advantages of breeding Uruk-hai for Saruman?
10
How was Isengard run before Saruman's creation of Uruk-Hai?
19
How were Uruk-hai captains selected?
28
How did Aragorn, Legolas, and Gimli know what Uruk-hai were?