Animated fantasy show about a red-haired girl and two boys

I am not sure what this animated fantasy show was called. It was somewhere in between 2003-2010 and all I remember is the fact that there were three teenagers, two boys and a girl. I don't remember much about the guys.

She had long ginger hair that was tied up into a ponytail and she usually carried some sort of special book around with her that the group of three found very important. It was also somehow associated with crystals as well, almost as if the crystals needed to be placed into a shape in the book. Either that or the book just had slots where crystals needed to be placed in. The girl also had a monster-like companion that spoke in a human voice, one that literally walked on four legs, controlled vines and was green, like it was covered in leaves or something. I am not 100% sure about this but I think her name was Eden, or somewhere along those lines.

I also happen to remember an episode where the girl had to choose which book was the real book out of a wide selection of similar looking books. She chose the right one since she remembered spilling a drink onto the pages and staining it.

Sounds like Magi-Nation. My kids watched it on Netflix a couple of years ago.

Summoned to the forgotten world of the Magi, young Tony Jones (known as the "Final Dreamer") awakens with magical powers in a new mystical land 3000 years old. With the help of two heroes in training, Edyn and Strag, Tony seeks to protect the Moonlands of Magi-Nation from the forces that want to destroy it. Tony and his helpers must stop evil Shadow Magi Agram from escaping from inside the planet's core and bringing the Moonlands under their control. The new friends must solve riddles, battle evil and discover hidden secrets in each region of the Moonlands. 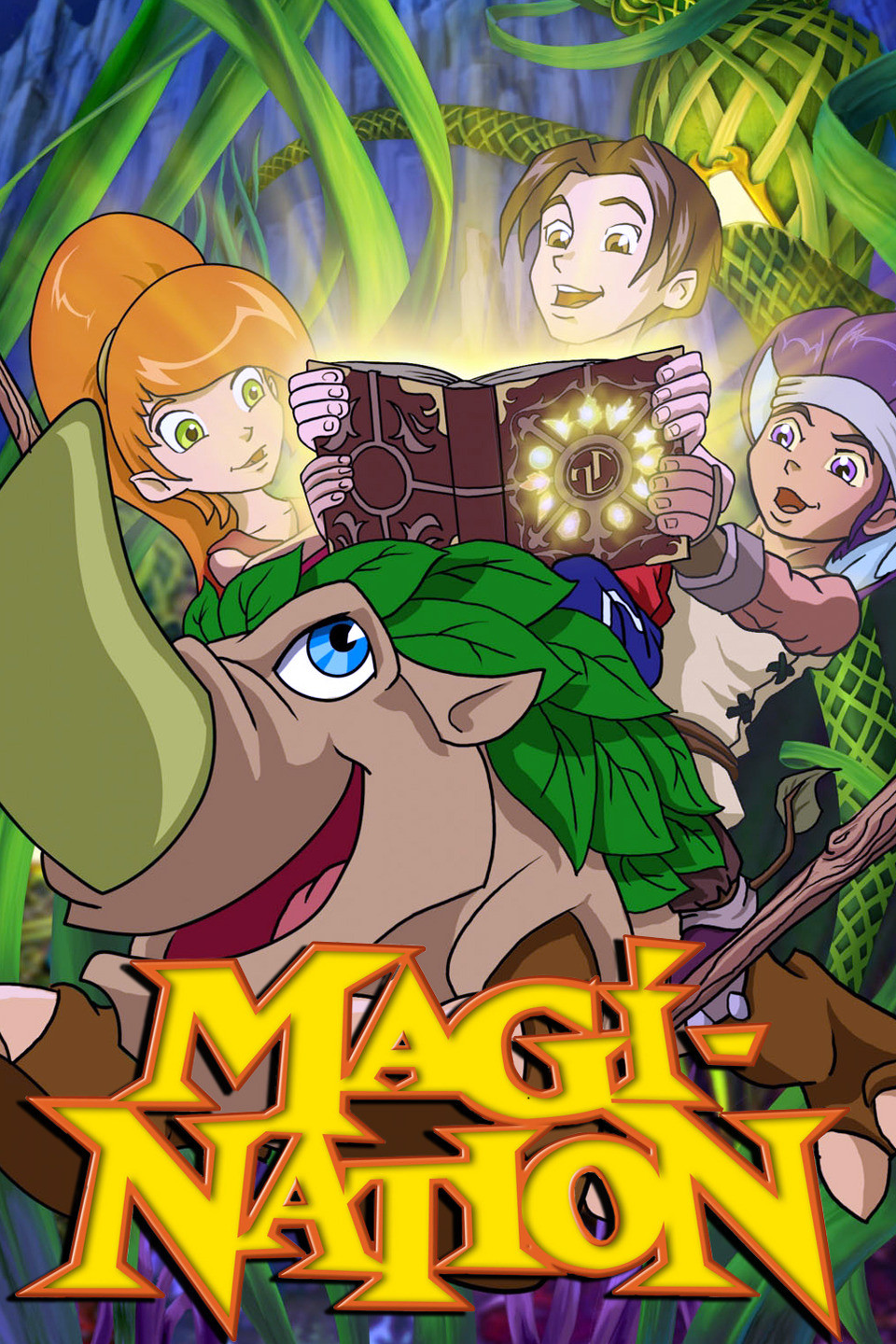 this is possibly Ultimate Book of Spells

Cassy, Verne & Gus are three gifted students who go to an enchanted school where they learn about magic and how to use it. One day they receive a strange talking book in the mail. The book says his name is UBOS (Ultimate Book of Spells) and together they must journey to the center of the Earth to stop Zarlak. Zarlak is a powerful wizard who is stealing all of Earth's magic so he can ultimately escape his prison, at the center of the earth, into which he was banished after a great battle. This begins a journey of a lifetime for the three students – one they will never forget. They have to juggle school life and fighting the forces of evil with only each other and UBOS for help. UBOS is actually Cassy's great-grandfather in disguise, as proven by several episodes, for example, after witnessing the legendary battle which ended with Zarlack's banishment, UBOS says to Cassy, "Come, my child". just like her great-grandfather. In another episode, UBOS said that Cassandra the seventh helped "m(e) – I mean, your great-grandfather" to Cassy and finally admitting it to Verne whilst not being himself.

5
Anime with gems that can summon beasts to fight for the user, one is a purple turtle