I recall the book cover had a man floating possibly in a raft on a red ocean and that it may involve time travel.

It also may have been the first book in a series.

Possibly about alternate futures the main character was more like an anthropologist( or archaeologist). The main character name possibly started with a "Q" (but its not "Q" from star trek) and may have been religious possibly Christian?

The main character ends up in an asylum.

I believe it was on Earth. Don't believe space travel was involved but on the book cover he may have been wearing a space suit.

Read the book back in the 90's and would like to re-read apologies for the vagueness.

Could it be Seeking the Mythical Future, which was written by Trevor Hoyle and published in 1977? Chris Queghan, an anthropologist, appears to travel in a space suit through the event horizon of a black hole into an alternate universe, and lands in a blood-red sea on Earth IVn.

I havenâ€™t read it myself, but there are more details, which may contain spoilers, at Trevor Hoyleâ€™s Wikipedia article and most of the details seem to match. 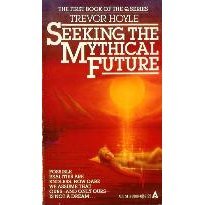 16
Novel where one of the characters is a sentient starship?
9
Teenage girl finds clothes that make her travel back in time
7
Identify a near-future book with automated news filters and floating countries
4
Novel about an alternate history of the Aztec empire from a modern day archaeologist time travelling back there
7
Book where aliens live in an ocean contained in a special camp