When Sauron saw Frodo at Mount Doom, why doesn't he do anything? [duplicate]

In the film (3.15), the Eye of Sauron sees Frodo on the corner of Mount Doom.

Maybe he didn't think that they are the ones trying to destroy the ring, but at least he sees someone who is a stranger in his land.

Shouldn't he react this situation in some way?

Edit: I am talking about this scene: 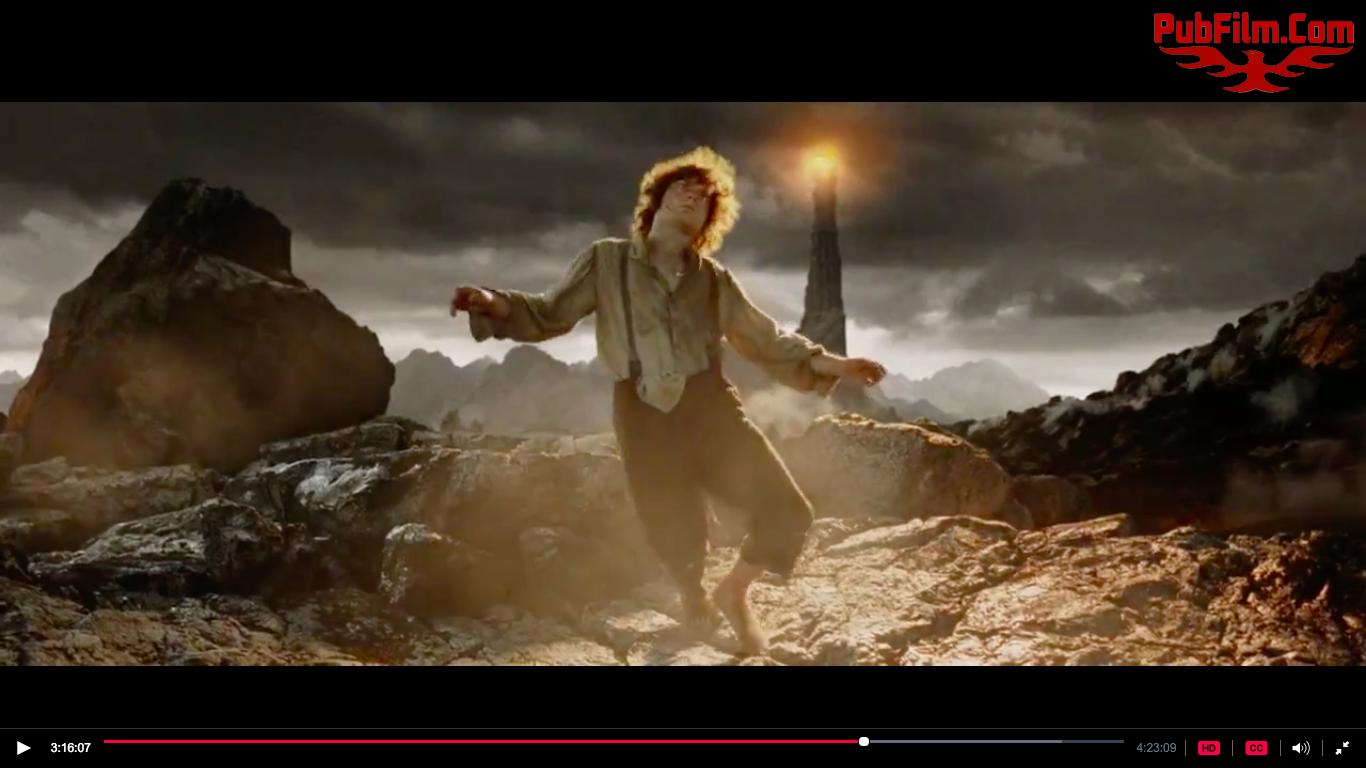 And far away, as Frodo put on the Ring and claimed it for his own, even in Sammath Naur at the very heart of his realm, the Power in Barad-dur was shaken, and the Tower trembled from its foundations to its proud and bitter crown. The Dark Lord was suddenly aware of him, and his Eye piercing all shadows looked across the plain to the door that he had made, and the magnitude of his own foll was revealed to him in a blinding flash, and all the devices of his enemies were at last laid bare. Then his wrath blazed in consuming flame, but his fear rose like a vast black smoke to choke him. For he knew his deadly peril and the thread on which his doom now hung.
From all his policies and webs of fear and treachery, from all his stratagems and wars his mind shook free; and throughout his realm a tremor ran, his slaved quailed, and his armies halted, and his captains suddenly steerless, bereft of will, wavered and despaired. For they were forgotten. The whole mind and purpose of the Power that weiled them was now bent with overwhelming force upon the Mountain. At his summons, wheeling with a rending cry, in a last desperate race there flew, faster than the winds, the Nazgul, the Ringwraiths, and with a storm of wings they hurtled southwards to Mount Doom.
-TRotK

He did respond -he sent the Nazgul. But he was too late, the Ring was eaten, and he was defeated.

In the book he doesn't spot Frodo untill it is too late because he is focused upon the fight between his forces and the armies of Gondor/Rohan who although outnumbered are still interesting enough to warrant watching. It is like if I was watching a film in which I knew the outcome (the fight) instead of two ants crawling across the floor (the hobbits). Also Sauron wanted to watch the defeat of his greatest enemies: the Numenoreans (probably spelt wrong) and Gandalf. In the book he only notices Frodo when he claims the Ring.

In the film he sees them but presumably doesn't know they have the ring and decides to ignore them for now and focus on more interesting things. They will probably get killed by orcs anyway.

If you watch it again, you will notice that the nazgul turn around to Mount Doom and attempt to take Frodo out. Now Sauron no longer has a powerful physical form (see the four fingers passage in the book) at that time and therefore cannot do anything about Frodo. So, he DOES react by calling the nazguls' attention to the situation, but he himself cannot do anything.

33
Would Sauron's army reach the Undying Lands if the Ring was not destroyed?
23
Why did Sauron keep the road to the Cracks of Doom maintained so well?
47
Why did Sauron react the way he did when Frodo put the Ring on inside Mount Doom?
5
Why does Frodo see the eye of Sauron in Galadriel's mirror?
2
Why didn't Sauron “hide” the One Ring?
6
Could the One Ring tempt someone who couldn't touch it and didn't know it was even there?
31
Why was Frodo unable to destroy the Ring?
7
Why is there so little concern for destroying the Ring?
48
What did Frodo and Sam eat when they crossed Mordor on foot?
2
Why didn't the Palantiri reveal the Fellowship's true plan?