How many shuttles does Voyager have, not including The Delta Flyer

In the episode Nightingale, at the start of the episode when Voyager is in the process of a major maintenance overhaul there are at least 3 shuttles that can be seen. I have lost track of the number of times a shuttle has been destroyed. How many shuttles does Voyager have, not including The Delta Flyer?

According to Ex Astris Scientia:

The official Star Trek Voyager Technical Guide V1.0, intended as guidelines for writers (sub-title: "Yes, but which button do I push to fire the phasers?"), ironically says that "Voyager normally carries two[!] standard shuttlecraft, four of the smaller shuttlepods, and four EVA workpods". We have never seen any shuttlepods or workpods. The two lonely shuttlecraft were obviously both supposed to be of Type 6, since this one is depicted in the booklet.

In strong contrast to what the booklet told the authors, lots of standard shuttles of no less than three different types, namely Type 6, Type 8 and Type 9 (the latter is designated as Type 12 in the Star Trek Fact Files and as Class 2 since the 5th season) were actually seen, and Voyager has probably lost as many as seventeen of them in seven years:

How many shuttles did Voyager really have at the beginning and how many were built afterwards? The aft section of an Intrepid-class vessel does not seem to be large enough to hold more than eight Starfleet shuttlecraft, and Neelix's ship which seems to be somewhat larger has to be stored as well. Fitting the Delta Flyer into the shuttlebay is still another problem (see also below). In an optimistic estimation, we can assume that there were eight shuttles aboard when Voyager left for the Badlands. Since Voyager's complement consists of as many as three different shuttlecraft types, it is a good guess is that there were two shuttles of Type 6, three of Type 8 and three of Type 9. This means that at least seven new shuttles of different types must have been built from stored spare parts. Given Chakotay's incredibly funny statement of a "full complement of shuttles" in "Alice", all fifteen until then destroyed shuttles should have been replaced, unless he counts the Delta Flyer as an equivalent of four or more shuttles.

Given this, and Voyager's apparent ability to construct The Delta Flyer while underway, they clearly had the ability to create replacement shuttles.

Voyager had up to 8 shuttles at any given time, with up to 17 built during the show's run.

Not including the Delta Flyer original. 8.

So at least 5 of type 6 (Tereshkova, Cochrane, Sacajawea, Drake, and unnamed shuttlecraft). An Aeroshuttle, which is basically a runabout. The Delta Flyer II (not excluded). And Nelix's ship the Baxial.

15+ Not including the Delta Flyer and the Baxial (Neelix's ship) Intrepid class blueprints show that beyond the shuttle bay is storage for more. Voyagers main shuttlebay is located on deck 9/10 (a two story mezzanine) Deck 11 leads to a lift elevator to carry shuttles up and down. 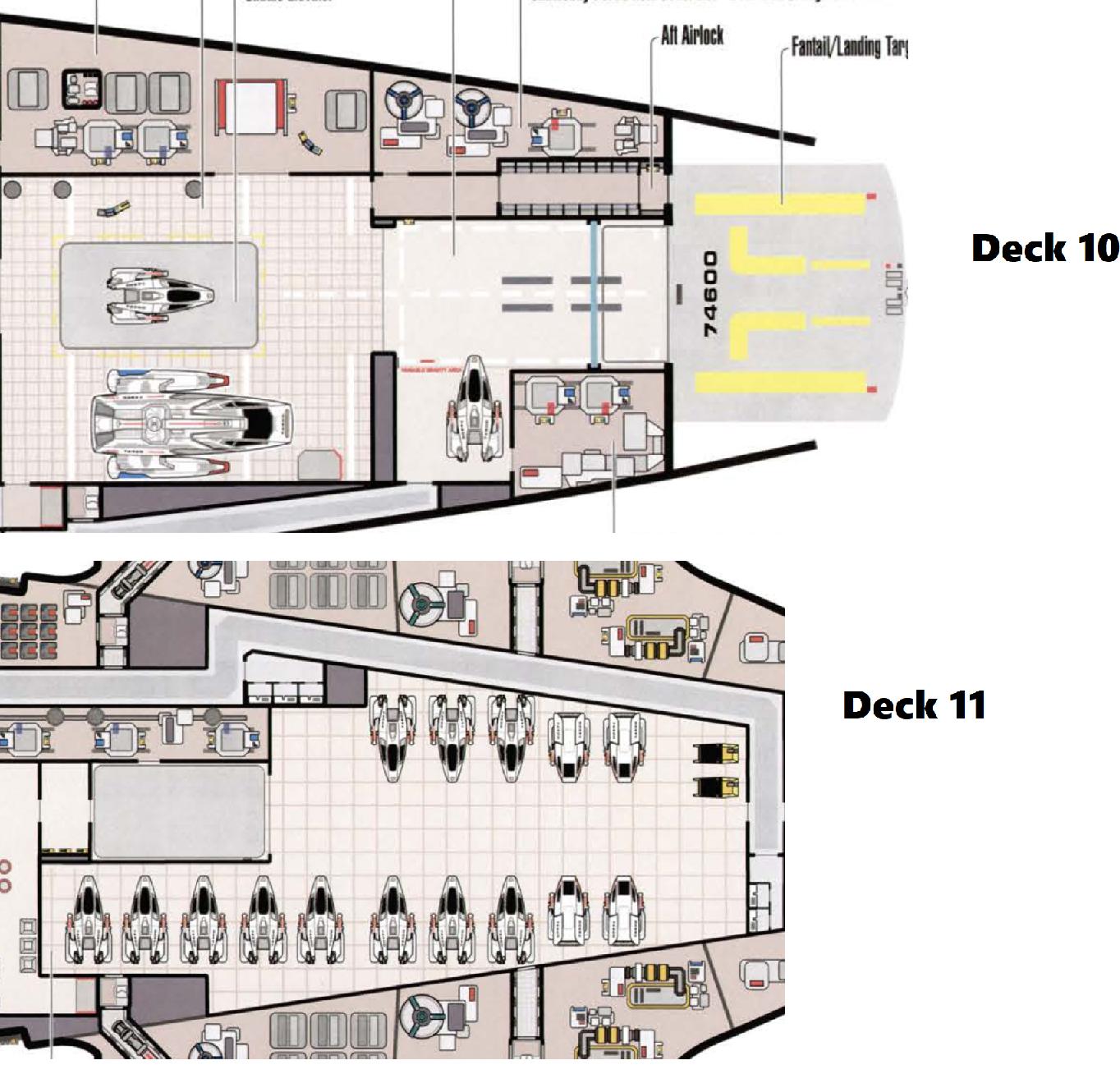 5
Star Trek Voyager shuttle conundrum
2
How has Voyager not run out of shuttlecraft?
41
Why wasn't it possible to completely de-borgify Seven of Nine while it was possible with Captain Picard?
9
Why don't the crew of Voyager ever talk about building replacement shuttles?
2
How many shuttlecraft were lost over the course of Star Trek:Voyager?
2
How many shuttles does the Discovery normally carry?

21
How was Voyager still in the Delta Quadrant at the end of the series?
5
How does out of phase Voyager get back into phase?
10
When did Tom Paris and B'elanna Torres get married?
2
How many Voyager crewmen die?
10
How is the Delta Flyer able to go off-course and meet up with Voyager?
13
How many people on Voyager outrank Harry Kim?
9
Why don't the crew of Voyager ever talk about building replacement shuttles?
2
How many shuttlecraft were lost over the course of Star Trek:Voyager?